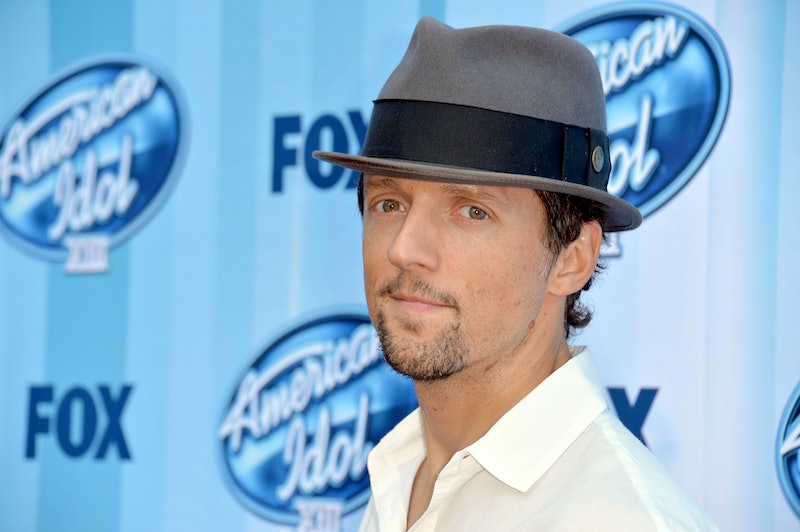 Jason Mraz, who just edited his Twitter bio to read "Singer/Songwriter/Husband," married his longtime girlfriend Christina Carano over the weekend, the Singer/Songwriter/Husband announced via social media. The musician shared a photo of his new bride at the altar, captioning the photo simply (and beautifully), "Today I was made the luckiest man in the world." While that goes without saying — and how Jason Mraz-like is that sweet sentiment? — who is Christina Carano, Jason Mraz's new wife and the woman who made the "I'm Yours" singer the "luckiest man in the world"?

Carano, who reportedly goes by "Tina" and who donned a stunning long-sleeve lace wedding gown complete with a crown of flowers in her hair on the big day, has been dating Mraz since 2011. The two, who first met in 2007 but were dating other people at the time (Mraz called off his engagement to Tristian Pettyman in 2011), are both intensely passionate about farming and sustainable living and seem like they're the kind of couple who are so in love you can just feel it radiating around the room. (At least that's how I picture it.) Read on to learn more about Mraz's new wife. Their quotes gushing about one another are my personal fave part. So sweet!

1. She Was Working As A Barista When She Met Him

"The first time I met Jason was at my coffee shop in Hermosa Beach — our mutual friend, Tricia, introduced us," Carano told Osider magazine. "I knew a miracle would have to happen for us to be together. I was a barista who got up at 4:30 am to open my shop, and he was a traveling musician who was always on the road and not going to bed until 4:30 am."

2. She Is Passionate About Farming

"Farms are the new universities," she told Osider. "Without farms and farmers, our society will be forced to eat genetically modified food created in labs — void of nutrients, and nature’s good intention. Some might think there’s no future in farming. But without farming there’s no future."

3. And She Is Practicing What She Preaches

"It’s my generation’s duty to bring back the home-cooked meal, to bring families together, and to slow down and say thank you — in gratitude for those who worked hard to put food on the table," she told the magazine. I love this.

Mraz describes his new wife as having a "intuitive-genius mind in the kitchen." Nom.

5. She Had A Longtime Crush On Jason

"After several years of crushing on him, the stars finally aligned — and now he’s my stud," Carano gushed. "We've created a really awesome life together and we make a great team."

6. And He Instantly Knew She Was Special, Too

"I met Christina back in 2007. I felt an instant connection to her and have admired her integrity and practices since day one," he told the magazine. "Back then, we were dating other people and were both super busy with our careers. But I did always say to myself, 'I hope I meet a girl like her someday.' In 2011, we both found ourselves single and decided to collaborate." And the rest is history.

7. She & Jason Live On A Farm In California

"We’re truly blessed in so many ways — like living in Oceanside together on a farm, where he grows our food and I cook it," Carano told the mag.

8. And She Really Loves Anthropologie

And apparently registered at the store for her wedding. The $400 tie-dye lamp is a personal fave.