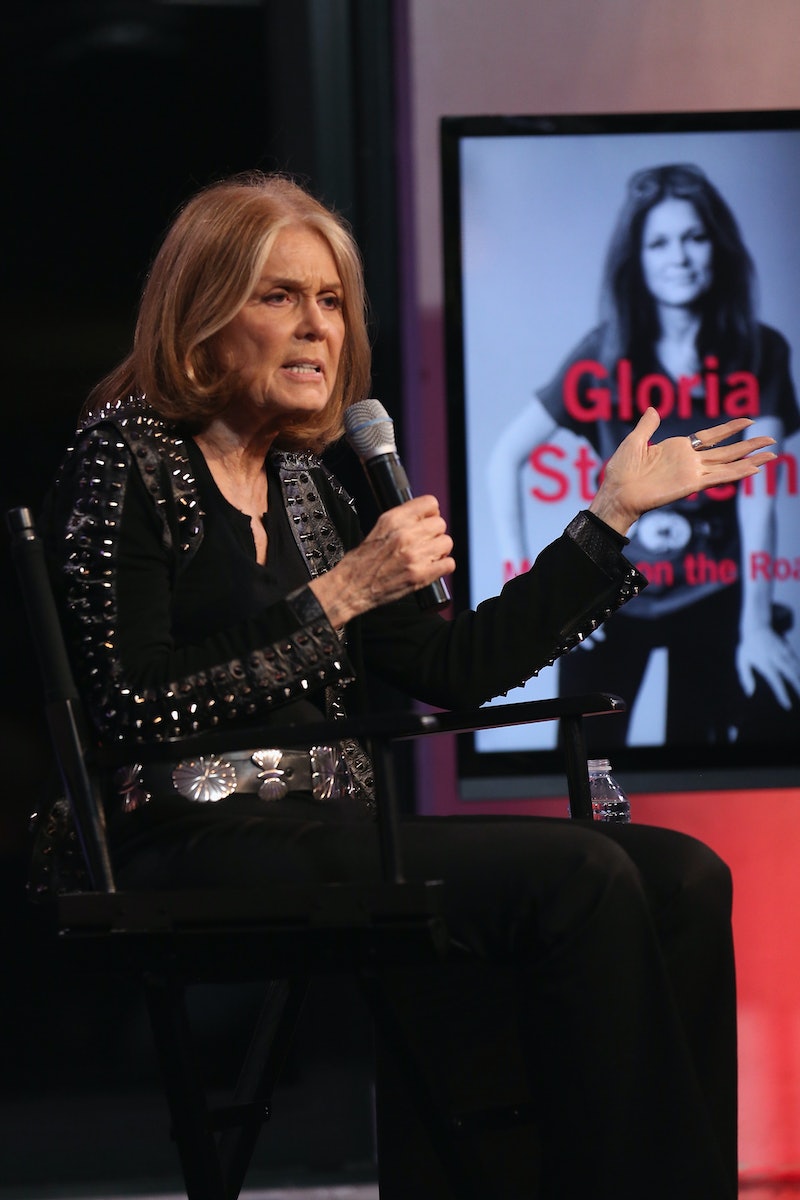 If you're a woman who has been called a "bitch" for asserting herself, you're in good company. In a recent interview with Cosmopolitan, feminist activist Gloria Steinem confessed she's no stranger to the label. And while crafting clever responses to sexist insults is no easy feat, Steinem has got this one covered: "The best thing I've ever thought of to say when somebody calls you a bitch is 'Thank you,'" she said. After all, if a bitch is someone who says what she wants and expresses her opinions unapologetically, then it is indeed a compliment. So, I'd like to say "thank you" to Steinem and all the other women out there who have come up with comeback lines like hers so we don't have to.

Steinem explained her choice of phrasing to Cosmopolitan:

I mean, it totally disarms them. They don't know what to do. Marlo Thomas always used to say that for a man to be called aggressive, he had to take over your business, but for a woman to be called aggressive, she had to only put you on hold. It's just a terrible double standard. We have to call them on it. If you call them on it, it changes people's heads.

In the meantime, though, if you're ever been called a bitch, a slut, or any other term disproportionately used against women, here are some ways other women have responded that completely turn these stereotypes on their heads.

1. Nicki Minaj Explained Everything Wrong With A Reporter's Question About Whether She "Thrives Off Drama"

Minaj unpacked every sexist assumption behind the question, starting with the stereotype that women are dramatic creatures: "That’s disrespectful... Why would a grown-ass woman thrive off drama?’’ Then, she went on to challenge the way people define women by their significant others (in this case, the sources of the "drama" were Minaj's boyfriend and several other men): "What do the four men you just named have to do with me thriving off drama?" Lastly, she addressed the notion that women are babysitters for the men in their lives, pointing out that the question "[puts] down a woman for something that men do, as if they’re children and I’m responsible." Mic drop.

2. Lindsey Swift Wrote A Fantastic Open Letter To A Harasser Who Joked About Her Weight

While Swift was on her daily run, a man in a car leaned out his window to harass her about her size. Swift turned the situation around by writing a letter on her Facebook page addressing his behavior and explaining why such comments are so very wrong. The letter went viral and spread much-needed awareness about how, as she says, "comments like these might [could] put a person less confident than me off from running, and that is shameful." Sometimes, we could all use a reminder that fat-shamers are really the only ones who deserve to be shamed.

3. Olivia Melville And Her Friends Started A Movement After She Was Slut-Shamed For A Line On Her Tinder Profile

A Tinder user took screenshots of Melville's profile, which contained lyrics sung by Drake in Nicki Minaj's "Only" — "Type of girl that will suck you dry and then eat some lunch with you" — and shared it on his Facebook page to slut-shame her. The screenshots sparked some horrendous comments, like "kill it before it breeds" and even a rape threat. But Melville's friends came to her rescue, including Paloma Brierley Newton, who wrote the Facebook post above explaining that the original post and comments represent "normalisation of violence against women." Newton, Melville, and their friends started the group and hashtag #SexualViolenceWontBeSilenced and created a Change.org petition calling on the Australian and New South Wales Parliaments to "ensure that appropriate laws exist, that police have proper training, and that appropriate resources are available and processes are in place so that people are safe from cyber harassment." How's that for an example of turning lemons into lemonade?

4. Oprah Shut Down T.I.'s Comments About A Woman President Like A Boss

Recently, rapper T.I. said he couldn't "vote for the leader of the free world to be a woman" because "women make rash decisions emotionally." When TMZ asked Oprah what she thought of the comment, she didn't give it an ounce of credence: “Well, you know what I say to that… I want to say, ‘Honey child, hush your mouth. You don’t know what you’re talking about.’ That’s what I would say… I don’t buy it, you know, it’s not true. I think people just like to talk.” Sometimes, it's not worth it to try to reason with sexists because they themselves probably haven't thought about what they're saying, so all you can do is "hush" them with the graceful, no-nonsense humor Oprah pulls off so very well.

More like this
Beyoncé & Madonna’s “Break My Soul” Remix Honors A Group Of Black Icons
By Stephanie Topacio Long
25 Things I've Reduced My Life To, In Addition To WFH In My PJs
By Ginny Hogan
How To Change Your Twitter Handle
By Emma Carey
13 Selfie Instagram Caption Ideas That Exude Main Character Energy
By Jessica Booth and Emma Carey
Get Even More From Bustle — Sign Up For The Newsletter