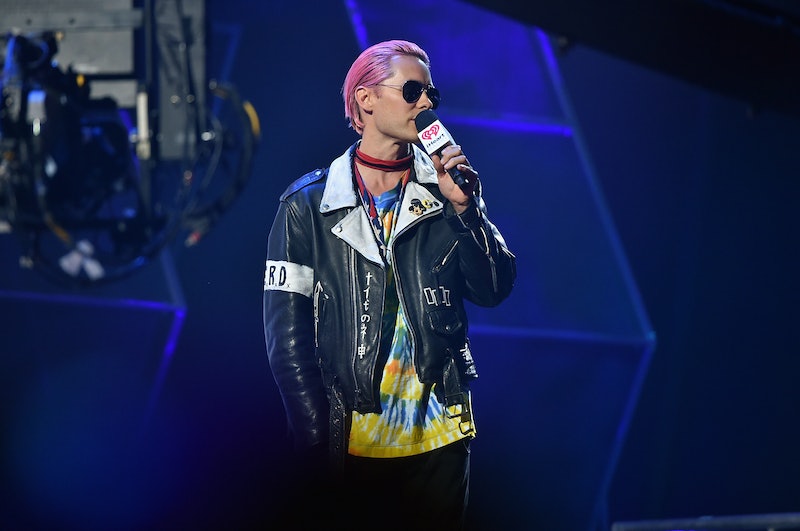 Just in time for Halloween, Empire released the cover of their new print issue, featuring a truly twisted and terrifying Jared Leto as the Joker from Suicide Squad. It's the first full-length photo of Leto as the iconic villain, and he is shirtless, barefoot, and looks like he wants to eat your face. Somehow, even more terrifying than his look, is Leto's description of just how committed he got to the role. He never broke character during the shoot, and that included freaking out his cast mates as much as possible.

In the cover story for Empire which ComicBookMovie.com got a hold of, Leto confirmed that he was full-on method acting for the role of the villain, playing some pretty chilling pranks on Jim Parrick, who plays the Joker's sidekick Jonny Frost, Margot Robbie, who plays Harley Quinn, and Will Smith, who plays Deadshot. Not only did he send Robbie a live rat, he also would apparently call up Parrick and tell him to fill backpacks up with nine-inch nails. Talking about the experience, Leto sounds a little scared of himself, and not without reason:

There was definitely a period of...detachment. I took a pretty deep dive. But this was a unique opportunity and I couldn't imagine doing it another way. It was fun, playing those psychological games. But at the same time it was very painful, like giving birth out of my pr*ck hole.

Well... that's an analogy that you won't soon forget, although I have to ask: what does Jared Leto know about giving birth? Are you, reader, also imagining him squeezing a tiny playing card out of his little Joker? Anyway, I digress.

Method acting is weird: this is not normal behavior, obviously, but it does seem like a good sign that Leto got so involved in the role — much like his predecessor Heath Ledger, whose genius Joker will be hard to live up to. But Leto took the role in a different direction, and not just with his look. His Joker is more psychotic, if that is possible: "I always get the sense that The Joker may be much older than people think. It's something different," Leto said.

Older...? Like the devil? Director David Ayer called Leto's performance "transcendent and scary," and the Empire cover reflects that insanity: Leto is framed against a neon background and two stark, small words, "Psycho Killer." He definitely looks the part, and apparently, really wants to do a good job. Suicide Squad will hit theaters August 5, 2016.