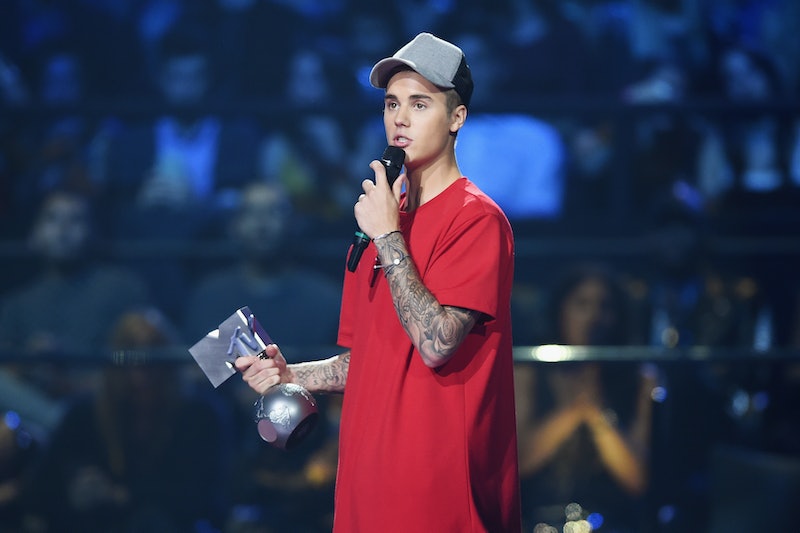 Ever since he released his new song, I've been waiting for Justin Bieber to explain what "Sorry" is about. I'll happily dig through any pile of lyrics for anything I think might be a window into their personal life, like I did with all the Bieber references in Selena Gomez's "Camouflage," but I just wasn't getting a ton of footholds, so I couldn't figure out where to start. There weren't any defining details, other than a vague reference to "missing more than just your body," which made me think this was a song for a woman Bieber had been involved with romantically. However, there were no specifics beyond that, so I was baffled.

Could this be an apology from Bieber to Gomez? If so, I feel like he would've wanted to make it a little more obvious, so that the speculation would lead to added publicity for the track, right? That's just good business sense — anyone who's seen the way Taylor Swift promotes albums knows that. Or was it maybe a blanket apology to all the pets Bieber has abandoned across the globe? They could definitely use an "I'm sorry." Or maybe to the guy whose house he egged? Or to his parents? Or to his pants, for wearing them so low all the time? Or to fashion at large, for trying to bring back bucket hats?

It could be anything, and, for all my speculation, I couldn't figure it out. Which is why it's pretty lucky that Bieber decided to tell me himself, during an interview with Kent "Smallzy" Small on Nova FM’s "Smallzy’s Surgery" radio show:

It’s kind of the stamp in the end of the apologies that I’m giving to people, to the media. There needs to come a time where they’re just like, ‘We get it.’ And I think putting out a song saying I’m sorry kinda puts the finishing icing on the cake. I’m ready to just move on.

Ahhhhh, it's for the media! Everything is becoming clear now, especially given Bieber's insistence that this is the last apology he's going to give for a while. Just in time for Bieber's upcoming album, Purpose, he's ready for us to start looking at him in a new light and stop expecting apologies.

So, assuming that he doesn't do anything blatantly wrong between now and then, anytime you feel yourself jonesing for an apology from Bieber for something he's done in the past, just pop on "Sorry," and you'll be using the song for exactly what Bieber intended it for.

More like this
Selena Gomez Is Fine Being Single, But She Still Manifested Romance On 'SNL'
By Martha Sorren, Jake Viswanath and Jack Irvin
Selena Gomez Explained Why A Past Album Cover Made Her Feel “Really Ashamed”
By Grace Wehniainen
Justin & Hailey Bieber's Bond Is "Unbreakable" Amid His Ramsay Hunt Diagnosis
By Bustle Editors
You Might Want To Rewatch 'Elvis' For This Britney Spears Easter Egg
By Grace Wehniainen
Get Even More From Bustle — Sign Up For The Newsletter