I started watching the Real Housewives shows because I wanted to see what it was really like to live such an outrageous and wealthy lifestyle. These days, I'm still interested in the ladies' outfits and homes and how much money they spend to get them, but that's not what has kept me glued to the franchise. I stuck around because I live for the drama and the arguments between the women. And there's no doubt that the best fights and most shocking moments happen at the Real Housewives reunion shows.

There is always something magical about the reunions. The women get dressed to the nines, Andy Cohen riles them up with the most pot-stirring questions, and it's on. The reunions are definitely the highlight of every Real Housewives season, and even within them there are plenty of moments that stand out from the rest. With so many outrageous outbursts, secret reveals, and crazy quotes to choose from, it definitely a difficult task to rank the top reunion moments, but somebody has to do it. The ladies have pulled hair, walked off the set, cried their eyes out, called each other out, and made for some pretty iconic reunion moments. Check out 12 of the most memorable ones below.

12. Lisa Claiming That Joanna Was A Hooker

This would rank a lot higher on the list if Real Housewives of Miami had a bigger impact. Lisa Hochstein claiming that Joanna Krupa used to be a hooker, no matter what the context, was a pretty wild thing to say during the Season 3 reunion. As expected, this definitely elevated the argument's intensity. Joanna clapped back at Lisa asking where she heard that from and to provide some sort of evidence, but nothing really came of it other than a lot of loud screaming.

Every time I see a GIF or clip of this forced hug, I feel beyond uncomfortable. Even with all the salacious things to happen during the second Real Housewives of New Jersey reunion, like Danielle Staub bringing a wig on a mannequin or Teresa Giudice shoving Andy Cohen, this forced hug will always stand out to me as a notable moment. You could just feel the awkwardness through the TV screen.

During the Real Housewives of Beverly Hills fifth season reunion, host Andy Cohen tried to defend Brandi Glanville after she was attacked by all of the ladies for various offenses like throwing wine and slapping Lisa Vanderpump, but he did so by comparing her to a dog. That did not sit well with Brandi, and she took it as an insult instead of a defense. Then she dared to swear at her boss, and no one could believe she had the nerve to do so.

9. Brandi Claiming That Kyle Doesn't Get Her Period Anymore

Say what you want about Brandi, but the girl does not skip a beat. Even with women hurling insults at her at every reunion, Brandi is so quick to come back at them all. When Kyle tried to call out Brandi for being a mess during the Season 5 reunion of RHOBH, Brandi slammed her right back.

I was so confused by the competitive nature between Peggy Tanous and Alexis Bellino on Real Housewives of Orange County during the show's sixth season, but once it was revealed that Peggy dated Alexis' husband Jim before they were married it all made sense. That was such a big thing to reveal in a reunion setting. Peggy was only on the show for a year, but this shocking moment helped her make a big mark.

7. Ramona Walking Off The Set

During the first reunion of Real Housewives of New York City, Ramona Singer was extremely uncomfortable when the topic turned to Alex McCord's naked pictures. Ramona kept trying to shut down the conversation because she did not want to be associated with the scandal... so she walked off the set.

6. Caroline Crying & Saying "You Know What You Did"

Caroline Manzo has always been a tough lady. She is not someone you want to mess with. So when she broke down during the Real Housewives of New Jersey Season 2 reunion when Dina Manzo's custody battle over her daughter was brought up, you know she had to be extremely upset.

I still do not know what to make of this moment during the first Atlanta reunion. Kim Zolciak was questioned by Cohen about her tendency to wear wigs, and then she attempted to explain it by saying she thought she had cancer at one point and may have had hair loss. Years later, no one understand Kim's confusing story about her sitting in a Chili's waiting for test results. She wore wigs because she thought that she might have cancer? I just don't get it.

4. Briana Saying That Vicki's Boyfriend Told Her Husband To Hit Her 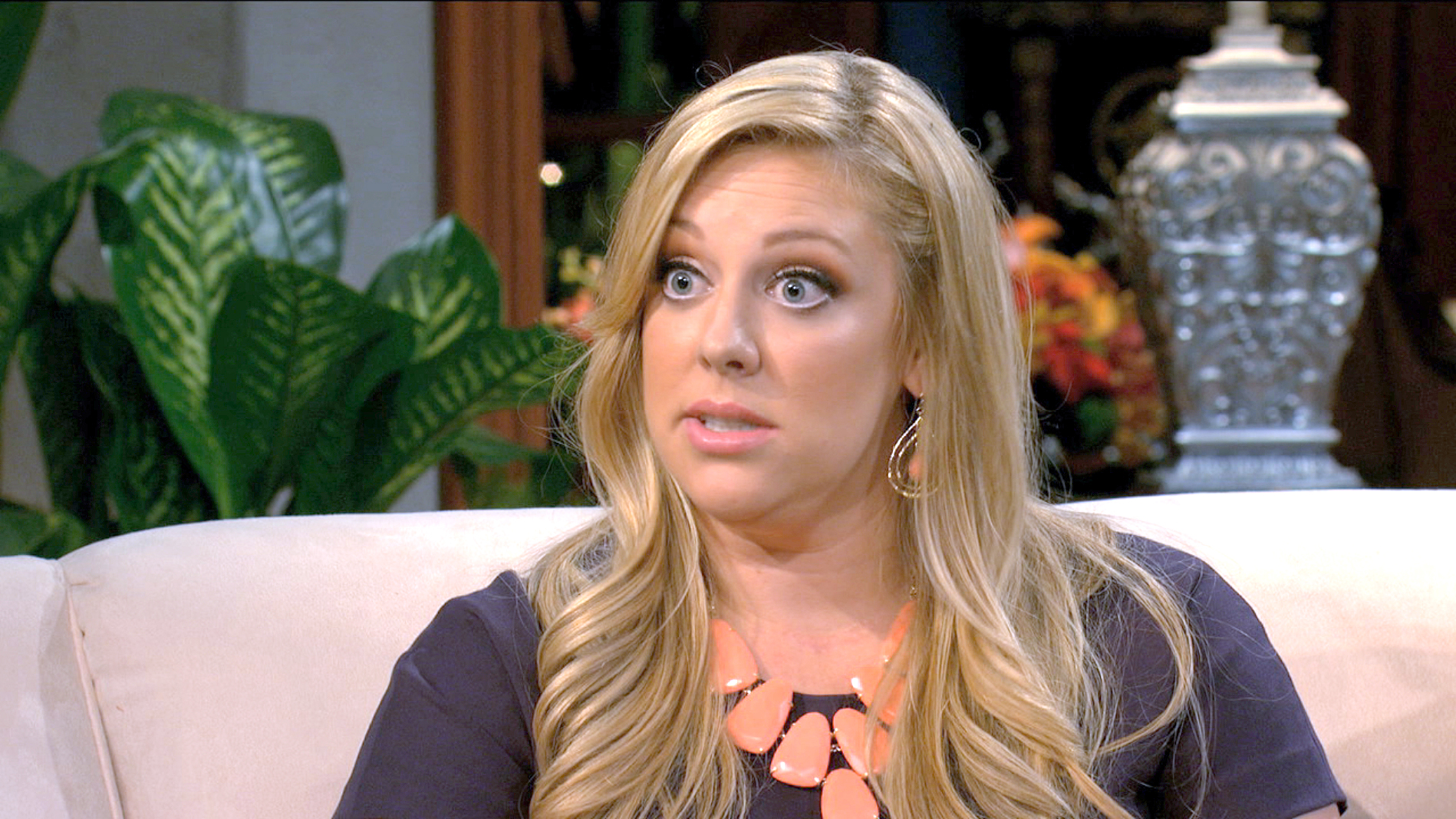 The RHOC Season 8 reunion went from zero to 100 real quick when Vicki Gunvalson's daughter, Briana, claimed that she did not like her mother's now ex-boyfriend Brooks because he told her husband to hit her to keep her in line. During the reunion, Brooks first denied the claims, but then later added, "I was drunk and angry, and yes, I'm sorry I said that."

3. Porsha Dragging Kenya By Her Hair

Sure, Kenya Moore was egging Porsha Williams on during the Real Housewives of Atlanta Season 6 reunion with her props and taunts, but Porsha took things to the next level when she pulled Kenya by her hair and dragged her across the stage. It was definitely the most violent thing to ever happen at a Real Housewives reunion — so far, anyway.

Cohen serves as the moderator on the reunion shows, so when he gets involved in the action, I am always taken aback. He physically tried to stop Teresa from coming after Danielle during RHONJ's second reunion, and Teresa shoved him down hard. I still cannot believe this one happened. Teresa is super strong!

The most iconic reunion quote ever came during Real Housewives of Atlanta Season 1. NeNe Leakes and Kim Zolciak were in a rocky place with their friendship, and NeNe decided to call her out for her relationship with the mysterious man known as Big Poppa. Housewives fans will never get over this quote.

There is just nothing like a Real Housewives reunion. The stakes are elevated. The women are looking their best. Andy Cohen is asking the tough questions. The reunions have all of the ingredients for iconic moments. I will never forget these top 12 moments, and I cannot wait to see what will go down on future episodes.