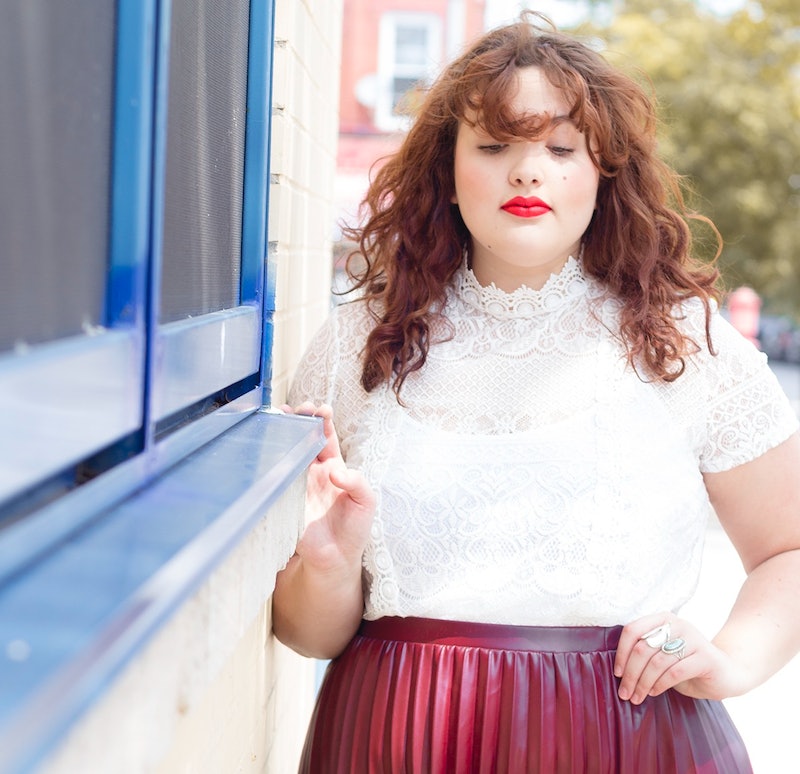 After several years of dedicating much of my time to protesting the inherent body shaming this world of ours produces, I woke up one morning recently and realized something: Fat shaming people on the Internet don't really bother me anymore. In fact, Internet trolls are actually pretty funny — if for no other reason than their total lack of individuality and creativity. If I had a dollar for every time I was called a "fat f*ck" or an orca, hell, I'd have enough money to go rogue, move to Europe, and dedicate my time to nothing but travel and writing (when the mood strikes, of course). OK: Maybe not quite that much. But certainly enough to fund a couple month's worth of Chipotle and buy myself a leopard-print faux fur coat.

It can obviously be pretty difficult to not feel insulted when someone is attacking you. People have feelings, those feelings get hurt, and that's a pretty normal occurrence. I would never suggest modifying the parts of your personality that are sensitive or vulnerable, but by learning to see the humor in potentially crummy situations, we can often come out of them feeling pretty damn empowered. When it comes to dealing with fat shamers on the World Wide Web, I'd definitely say this has been true for me.

Below are 13 types of comments I've personally received over the years, accompanied by some enjoyable imagery for effect. When you start realizing just how dull and lacking of any logical argument these words tend to be, you realize that the only thing they often are is funny.

Really? The most original insult someone can hurl at us is that we resemble a massive sea mammal? I mean, whales tend to weigh 200,000 to 300,000 pounds — basically the same as my 250, right? Whales are also pretty cute, and Free Willy was all the rage when I was a kid. In fact, let's re-watch it now. There's nothing like solidarity.

2. "Don't compare the fatties to whales! It's insulting to the majestic creature of the sea!"

Here are some fun whale facts, according to National Geographic:

Some trolls are more accurate at least. While I am pretty darn majestic in the water and could probably manage to consume four tons of crustacean in a day if Red Lobster was having a special, I would admittedly struggle to reach speeds of up to 20 miles per hour (even if agitated). As for how far my blowhole can spray... Let's not get into that.

Whales are incomparably spectacular — truly graceful and powerful. I am just a fat girl.

4. "No one wants to touch those gross, sweaty rolls!"

This is going to scare you trolls, but every night all over the world thousands of fat people are having their sweaty rolls rocked, their cellulite shaken, and their fat... fondled lovingly.

That heartbreaking moment when you realize you're never going to be able to go out with any of the kind, compassionate, courteous gentlemen of Reddit.

Yes, yes. Fat people never exercise. Never do I move from my bed. My hobbies include snoring, farting, and collecting pizza crust crumbs in my belly button. One day, I shall have enough to re-create an entire slice. Oh, what a glorious day it shall be.

7. "If she just stopped eating ice cream, she'd be able to lose the weight!"

8. "No one can make fat look beautiful!"

If someone says something like "fat is never sexy" and doesn't add "in my opinion" afterwards, then that is simply a false statement. There are as many different perceptions of beauty as there are people in the world.

Some people's perceptions are just a little more narrow. Unlike my ass.

9. "People in this world are starving! Have you no compassion?!"

If ever a troll is trying to take the moral high ground, just remember that they likely didn't think about children in need the last time they threw out some leftovers. Or the time they turned their nose up at an everything bagel because (ugh!) it just had so many calories.

This one's the Jillian Michaels trope. We don't share a hive mind à la Borg, so I couldn't possibly comment on the inherent joy of all my fellow fatties. As for me, I'm pretty happy with my lardy bits.

Oh, if only you knew the effort that's gone into making all of this...

In all seriousness, I normally see this comment on photos of fat women daring to be fat in the public eye. Personally, I think they have plenty to be proud of. Like:

Despite the fact that I think "obesity" is a BS term and BMI isn't a good indicator of health, I'll have to give this one to the trolls. Many size acceptance activists are, in fact, treating fatness as a more splendid and excellent characteristic than this body shaming universe of ours would have us believe it is. Ya got me!

Does that mean I think everyone should be fat? No. What a boring world it'd be if everyone wanted to look the same.

I don't know that fat shaming will ever cease to be a common practice in this world. But I do know that acknowledging just how dull and uninspired fat shamers' remarks tend to be is usually enough to make me remember that most of them aren't worth more than the two seconds it takes to LOL and close the tab.

More like this
I Have Eyebrow Alopecia – & Microblading Gave Me My Confidence Back
By Jessica Morgan
42 Black Owned Fashion & Beauty Brands To Support Today & Always
By Mekita Rivas, Shea Simmons, Kui Mwai and Dominique Norman
23 Times Meghan Markle Dressed Just Like Princess Diana
By Bustle UK
“The Door Is Always Open” For Another 'Breaking Bad' Spin-Off, Says AMC Boss
By El Hunt
Get Even More From Bustle — Sign Up For The Newsletter