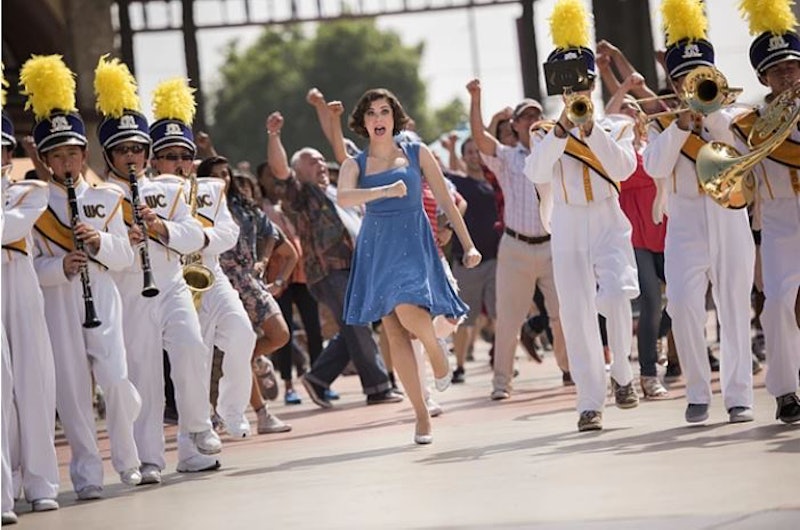 If Rebecca wasn't already completely hung up on Josh Chan, she sure is now. After Paula urges her to face her fears, she decides to throw a rager of a house party — forgetting the fact that she doesn't actually know enough people in town to pull it off. The bright side is that Josh shows up, skirting Valencia's rules with a pretty flimsy loophole that she probably won't mind his going since they won't actually be alone with one another. After last week's disastrous club outing Valencia is mad that Rebecca kissed her, and that the two lied about their relationship history together, so she has forbidden him from seeing her. The party starts off on a pathetic note with almost hardly anyone showing up, triggering Rebecca's childhood issues of abandonment. In one of his best moves since the show started Josh saved Rebecca's house party, inviting people over, and making sure everyone had a great time.

This lead to another musical number with Josh as an (amazing) five person boy band, singing Rebecca's troubles away. The two bond during the party and Josh decides to stand up to Valencia for their friendship. It's a sweet move, but ultimately doomed for failure: Rebecca wants a relationship with Josh, who is not about to dump his girlfriend for her. They can try this whole just friends thing but come on, we've all seen romantic comedies, we know how this goes. Meanwhile Greg and Rebecca kept up their "Sam and Diane" vibe until Greg realized that Rebecca is in love with Josh. He was pretty dunk when he makes the connection so we'll see if it lasts but it seemed to put a damper on his burgeoning feelings for her.

It looks like we are headed right for a love-square situation — who said West Covina was drama free?