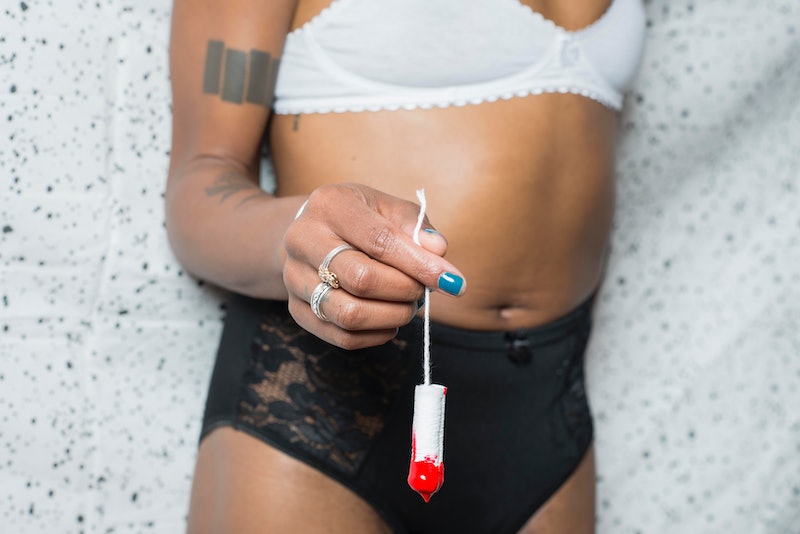 To have period sex, or not to have period sex — that is the question many women face every 28 days or so. For some, it's simply a no-brainer: Period sex is effing amazing. Forget the mess it may leave; period sex comes with extra (and natural) lube, heightened horniness, and a great excuse for hopping in the shower together. But for some women, it's uncomfortable or nerve-wracking, or the stigma around menstruation gets in the way, or they think their partner wouldn't be into it.

But is that really true? Is period sex that big of a deal to the people we're sleeping with? Of course, if having sex on your period is something you're just uncomfortable with, that's totally fine. But if you want to try it, but are afraid your partner would be grossed out, it may be time to reconsider. Have a chat with them, and see what they think.

To weigh in on the period sex pros and cons, I asked some guys who have had period sex to share their experiences about what it was really like. As you'll see, a lot of guys not only don't think it's a big deal, but some even think that it's more intimate. Read on for some true tales of period sex.

"The first time I had period sex with my now-girlfriend, neither of us even realized it was happening. It was only when we turned on the lights that we found it. It gave us a great excuse to go for round two while we were washing up in the shower."

"I actually had to talk the girl I was seeing into doing it. We were long-distance for a few months while I was training for my new job, and when I finally got to see her, she told me we couldn't have sex because she was on her period. It had been so long and I wanted her so bad that I didn't care."

"I was drunk in college, and my new girlfriend at the time and I slipped away from a small party into a dark bedroom. When we reemerged, my shirt and arms were bloody. I was swiftly escorted into a nearby bathroom. Periods really complicate sneaky party sex."

"I met a girl while I was on vacation who told me she had never had sex on her period — which she happened to have just as things were heating up. So I told her that I had never had sex in a hot tub. We both experienced some firsts that night."

"I actually lost my virginity with period sex. It was with my high school girlfriend after prom, and we had waited for so long that there was absolutely nothing that was going to stop me."

"As a young stud 20-something, my experience is that nothing will stop the march to completion. Once you are within range, it is onward and inward. The elasticity is lower, and the 'friction' is annoying, but the goal is the same. Everything is washable, and a warm washcloth managed by your partner can be an 'I'll love you forever' moment."

"I had an affair with a married woman. She would come to my house after dropping off her kids at school, and we would make love. One morning, she had a very strong flow, and while the blood acted as a lubricant, there was also a feeling of slight friction and some kind of fluid dynamics, which was very pleasurable and exciting. When we climaxed, we uncoupled and both of our bodies were drenched in blood. We just laid together, legs intertwined, and the blood ran down my thighs. I felt such intense love for her having shared that experience with me."

"When I started kissing down her body, and she stopped me and told me she was on her period. I jokingly said, 'It's OK, I'm into horror films.' She laughed and allowed me to proceed. She was able to finish, and later thanked me for getting her through that because she has her best sex while on her period."

"My wife and I have twin toddlers. When we have the time and energy to go at it, it's happening. If it happens to be that time of the month, fine by me."

"I grew up by the water, and my high school girlfriend and I had a tradition where when she was on her period: We'd sneak down and have sex on the beach. It was oddly pleasurable. The sand would get stuck to the blood on our bodies, and when we were finished, the blood would be this really sick reddish pink color. I don't know why this became a thing; it just did. I kind of miss it."

"The first time my current girlfriend and I had sex, she didn't realize that she had her period, and when we were done, there was blood all over my comforter. She was embarrassed, but I didn't care too much. I actually made a joke about painting the town red. When she sent a brand-new comforter to my apartment a few days later, I knew she was a keeper."