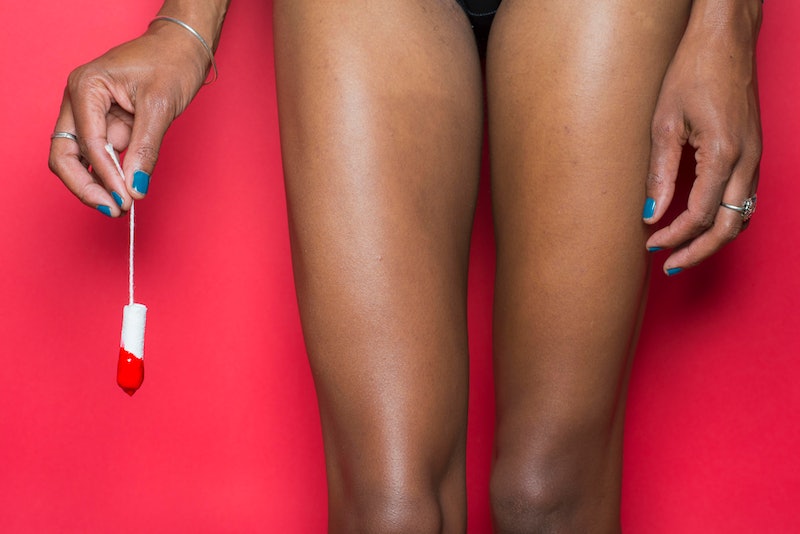 Menses, amirite? The headaches, the backaches, the cramps, the stains, the depression, THE WORST. A woman getting her period is a beautiful, natural bodily function that demonstrates reproductive health, but it can also be quite the drag. Plus, that time of the month isn't any easier when treatment from patriarchal family, friends, partners, and government (shout out to the tampon tax) reminds us that our bodies are a disgusting inconvenience in this society.

Additionally, despite menstruation being a normal part of life for approximately half of the population, it's so stigmatized that commercials for feminine hygiene products show dancing women in white spandex pouring blue liquids; they don't provide any actual medical information. It is no wonder, then, that so many shameful and blatantly inaccurate myths surround the idea of a woman having sex while on her period. These myths range from proclamations that a woman physically cannot engage in intercourse to it being too messy and bloody for anything to happen. So what is it really like to have sex when on your period?

According to many of the women that you'll hear from in this article, period sex is amazing. The mixture of hormones and extra lubrication works together to create a new, exciting experience that many women would deny themselves because it's "too messy." Though, as these ladies can also attest, that's nothing that a towel can't fix! And when it comes to self-consciousness, it appears that the menstruating partner is usually the one to cancel sex plans. A lot of their partners would be all for it!

Now, this isn't to say that all women enjoy sex while menstruating, which you'll learn more about as you continue reading. Whether they're just too uncomfortable or if they suffer from a disorder like Polycystic Ovary Syndrome (PCOS), period sex just may not be ideal. Regardless, menstruation must be destigmatized, which can happen through conversation. So let's hear what these women have to say:

"Generally, the experience is quite delightful and enjoyable if somewhat messy. Usually, sex whilst on my period involves communicating and coordinating adequate towel coverage on the bed or the carpet, frequent restroom breaks before and after sexy time, and I usually vacillate between super sensitive (everywhere) around my vulva and nipples, or I'm very tired and want to be held with an emphasis on cuddling."

"I honestly hated it. I have PCOS, so I have what I call 'apogalypse periods' once a year or so. They're so heavy, really clot-y, and I'm so sensitive and sore. I am zero percent interested in getting it on. As a sex educator, I encourage other people to try it and know there's nothing wrong with it — it can actually be really beneficial and more pleasurable for most people, actually. I am just feeling my least sexy while my body is pushing a year's worth of uterine lining out."

"I was pretty nervous at the beginning, mostly about the mess it would leave on my sheets! My boyfriend was completely unbothered by it, which helped put me at ease. Once we got into the swing of things, I noticed my body was significantly more sensitive and...tingly. The orgasm was stellar, top notch. I think if people can get over the ickiness society has associated with periods and period sex, the reward is well worth an extra load of laundry."

"I don't find it any different than regular sex, except that there's even more lubrication. I won't sleep with anyone who's squeamish about it. As long as the person you're with doesn't mind/is into it, it's all good."

"My favorite kind of sex. The blood acts as extra lubrication, which is awesome."

"Period sex is always a bit messier — but it can be a good thing. The wetness feels great and it's super intimate to be with your partner in such a vulnerable, un-perfect state."

"At first I was slightly apprehensive due to my fear of stains I can't remove. But my partner basically reacted like this. After the initial fear, I realized that it's ridiculous to feel that way and I refuse to let a natural occurrence bring me shame. In the end, I definitely felt like I was stepping into unknown territory which became really hot. No regrets and it hasn't stopped me from enjoying myself since."

"The first time I did it, I couldn't believe how amazing it felt considering how disgusting we assume it to be (thanks, society). Is it weird if it almost makes me look forward to my period?"

"Orgasms are the best cures for cramps!"

"My boyfriend always lets me know that he doesn't mind the blood at all, but my body just aches so terribly that I can't relax. Usually I'll end up wanting to stop."

"The best orgasm I've ever had happened during period sex."