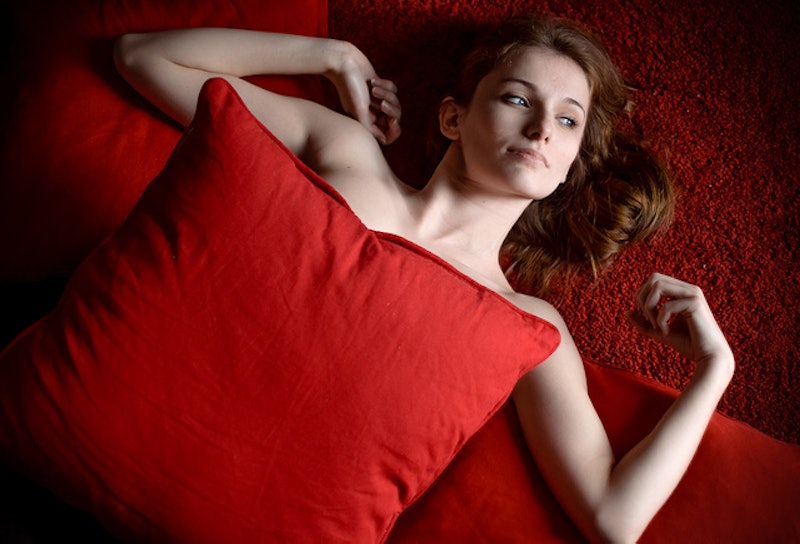 Fifty Shades of Grey had period sex in it, and blood hounds (people who aren't just OK with period sex, they seek it out) are now considered a thing, perhaps period sex isn't such a taboo any longer, but a type of sex that people shouldn't avoid, but embrace. I have to admit, without being TMI, I actually like period sex the best. And, there are tons of health benefits of having sex on your period. Is there a name for female blood hounds? Blood bitches? Flow-fan? Red-wing enthusiasts?

Before the practice of sending menstruating women away to a separate tent, and forbidding them from participating in the preparation of food for men (ok if you insist, I'll take a break from the non-ending work I have to do, and hang out with my ladies) women on their period were thought to be at the height of their power. Men who desired some of that power would drink a mixture of menstrual blood and red wine, which sounds like Eric of True Blood getting wasted. Ancient Greek spring festivals included the spreading on the earth of corn mixed with menstrual blood to increase fertility.

Menstrual blood was thought to heal, be holy, and have tremendous power; in other words, menstrual blood was magical. And as everybody knows great sex can be magical too, so why not have amazing, mind-blowing, magical period sex?

1. When you're on your period, you're ready for blast off.

When you're on your period you can feel constantly aroused. Elle Chase, Sex Educator and Coach says, "There are some women who love to have sex during their period, and no wonder, our estrogen is usually at its lowest at the begining of our period. During our flow our estrogen AND our testosterone rises making us feel more sexed up. Plus, increases in blood flow can make our vulva and vagina more sensitive while we're menstruating... so there's that. A heightened horniness and pleasure can become associated with period sex, intensifying sexual desire.

2. There's the thrill of doing something forbidden or unconventional which makes you even more excited.

The thought that period sex is considered to be dirty can add to the feeling of excitement for some women. Everybody enjoys being bad on occasion. And let's be honest, the blood aspect changes everything, and you can fool yourself into thinking that you're wilder and more adventurous than you really are.

3. No need for lube, you've got a natural lubricant.

Before having sex, make sure to put a dark towel on the bed, and keep a warm, wet washcloth where you can reach it, to make sure that where you get down doesn't end up looking like a crime-scene. Having sex in the shower is also great for easy clean-up.

4. Having period sex can be a natural pain reliever.

5. Not all positions are messy.

Elle Chase suggests having sex on your side, and in a modified missionary position with the woman's hips raised on a pillow or using a Liberator Wedge.

6. There are products to help keep the red tide back.

A female condom, sponge and menstrual cup will help to cut down on the red fluid, at least as long as your sex session.

Many people assume that their partners would be disgusted by P-sex and yet some think that a woman being on her period during sex adds to the intimacy, and some don't care, they just want sex, and are totally down for a threeway with Aunt Flo.

Keep in mind, you can still get pregnant when you're on your period since ovulation can overlap with menstruation. Also the cervix is more open during this time of the month(which allows blood to pass) so you have a slightly higher risk of infection and sexually transmitted diseases including HIV and hepatitis. A condom will also help with the mess, so that some of the blood that gets on him will easily be rolled off.

If period sex isn't for you, that's OK, you should just do whatever makes you feel better during your period and not limit yourself. Your period doesn't have to be a curse, it can be about fun, pleasure and the relief of pain.