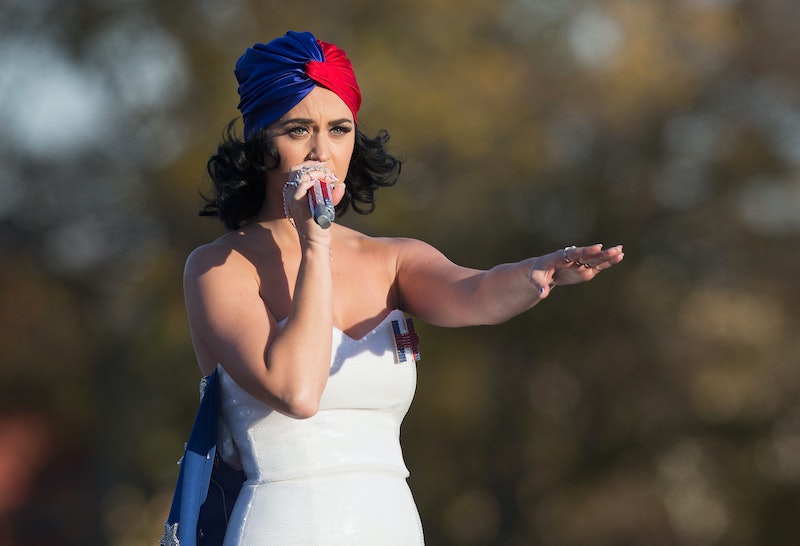 You know what they say about having an opinion: Don't, because thousands of angry Internet users will immediately jump down your throat. Or, you know, something like that. It's something that most celebrities are pretty used to, but one in particular got an especially brutal crash course in it this week. On Monday, Katy Perry wished Hillary Clinton a happy birthday on Instagram, along with a lengthy caption explaining exactly why Clinton has her support, and it didn't take long before her followers turned the comments section of her photo into pure criticism.

First of all, a birthday wish from Perry to Clinton? Her followers should have seen this coming. Over the weekend, the 31-year-old performed at Clinton's Iowa rally and gifted her a gold "POTUS" necklace. But it's not like Perry being a fan of the presidential candidate is news, either — and she's definitely done her homework. In her Instagram caption, she happily explained why, and in no uncertain terms. As the singer revealed, she and Maya Harris, one of Clinton's senior policy advisors, sat down for a three-hour conversation before her performance to answer the questions she had about what Clinton's vision for the future of America is, and after she was able to make a fully informed decision, it only enforced her support of the former Secretary of State.

"I was never raised with economic privilege and found money to be the main source of pain for my own family growing up, so I understand why there is a need for such change," Perry writes. "I am still learning and educating myself on the world of politics and searching for every strand of authenticity buried deep in it. What I heard and experienced this weekend empowers me to believe that real change is possible and on the way!" (You can read Perry's full caption here.)

I love that the "Firework" performer is willing to open up about her beliefs and stand up for what she thinks is right, but there are plenty of people who don't feel the same way. And although it's pretty much par for the course that followers would comment to disagree with Perry's opinion, there were even more who said that as a musician, she shouldn't have an opinion at all.

It's hard to understand why people would think that celebrities shouldn't be allowed to form political opinions and speak out about them. After all, they're living in this country and will be affected by the decisions made by future leaders, too. They should definitely have a say in that future by voting and talking about the opinions as much as they see fit. And if musicians like Perry want to use their voice to call attention to issues that are important to them — issues that also affect people whose voices won't be heard as loudly as Perry's will — then maybe that's exactly what we need, especially since we don't all have the option or the advantage of getting to sit down with Clinton's advisors and asking the hard questions.

I am totally here for any celebrities who want to use their voice and power for good. Perry, please continue.

More like this
Are John Legend & Kanye West Still Friends? The Singer’s Latest Update Is Candid
By Brad Witter
'Scream’s Courteney Cox Has Broken A Major Horror Record
By Sophie McEvoy
Kim Kardashian & Pete Davidson’s Reported Breakup Has Twitter Running Wild
By Brad Witter
Kim Kardashian & Pete Davidson’s Relationship Timeline From Start To Finish
By Jordyn Tilchen and Bustle Editors
Get Even More From Bustle — Sign Up For The Newsletter