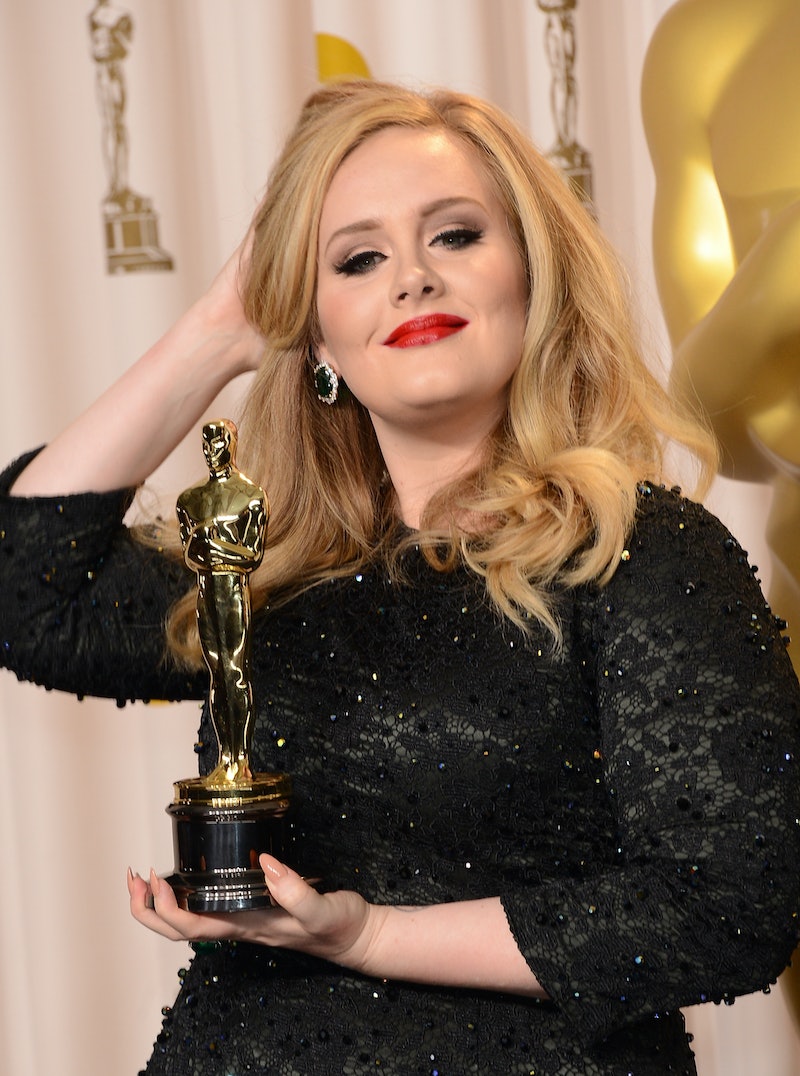 Adele isn’t only admirable for her soulful, bluesy voice or her ability to spin you into a dark, aching depression while singing in your car. She’s also a complete and total champion when it comes to body positivity. Adele's body positive quotes prove that she's one of a kind not only because of her ‘60s throwback beehive skills, but also because of her loud personality and her no-nonsense, sometimes brass responses when it comes to her body. The thing that is so admirable about Adele’s attitude towards her figure is perhaps that she sees it as a non-issue.

From my observations, Adele seems bored when talking about her body. When questioned in interviews about it, she shrugs the subject off, always bringing back the attention to her work. She doesn’t need to look a certain way to create a beautiful, powerful life, and knows that neither does anyone else.

When Adele talks body positivity, she stresses the fact that to conform is to lose your individuality. Everyone has something wonderful to offer, and how your exterior looks has nothing to do with what you can make of yourself. You already have the ability to be happy. Below are nine of the best Adele quotes on body positivity. Read them and see just why she’s such an inspiration.

1. "I like looking nice, but I always put comfort over fashion... Be happy and healthy. I’ve never had a problem with the way I look. I’d rather have lunch with my friends than go to a gym.”

One of my favorite things about Adele is that whenever she gets asked about her weight (and she gets asked about it a lot) she almost always looks bored, as though she's asking, "Why is this even an issue?" In 2009, she set the record straight with The Daily Mail and shared that she's never had a problem with the way she looks. She then expressed how most of us feel when it comes to lunch. Nom.

2. “I enjoy being me; I always have done. I’ve seen people where it rules their lives, you know, who want to be thinner or have bigger boobs, and it wears them down. And I don’t want that in my life."

Most of us have seen how women treat their reflections in the mirror, and it isn't often kind. What's worse is that we then see how negatively this actually affects women. It's a constant cycle of frustration and dislike, and, just like Adele told Vogue UK in 2011, it can wear us down. Why live life that way? Wouldn't it be better to choose happiness?

3. "I think no matter what you look like, the key is to first of all be happy with yourself. And then you know if you want to try to improve things that you don't like about yourself, then do it after you appreciate yourself."

Self-improvement isn't a bad thing, so long as you're doing it for the right reasons. In 2012, Adele told Mirror that as long as your need to improve comes from a productive, self-loving place, then you should feel free to go all in. However, if it's coming from a place where you hate who you are as a human, then that's arguably nothing but destructive.

4. “I’ve never wanted to look like models on the cover of magazines. I represent the majority of women and I’m very proud of that.”

This is always refreshing to hear. In 2012, Adele gave the readers of People a reminder that what we see in magazines is not what the majority of women look like. While models' bodies are beautiful, so are the rounder, pointier, softer figures of the women buying said magazines at the grocery stores.

5. “I’d lose weight if I was an actress and had to play a role where you’re supposed to be 40 pounds lighter, but weight has nothing to do with my career. Even when I was signing a contract, most of the industry knew if anyone ever dared say lose weight to me, they wouldn’t be working with me.”

While the beginning of this quote is somewhat problematic, you have to love that steely determination to not let anyone try to change her in her field. Adele is a body positivity champion because she always comes off as such a no-nonsense human when it comes to body image. Just like this 2012 quote from People shows, if anyone tried to tell her to change or to feel ashamed of her body, she'd simply not deal with them and find someone else to work with. Because who needs people like that in their corner?

6. “I have never been insecure, ever, about how I look, about what I want to do with myself. My mom told me to only ever do things for myself, not for others.”

In 2009, Adele told The Daily Mail where she got that unshakable self-confidence from: Her mom. When you keep your best interests at the front of your mind (and don't listen to the outside suggestions regarding how you should change), it seems like you can accomplish big, beautiful things. And most importantly, you can let yourself feel happy about it.

7. "My life is full of drama, and I don't have time to worry about something as petty as what I look like."

Adele puts things into perspective in a 2011 interview with Rolling Stone. There's so much wonderful, intimidating, scary new stuff happening in most of our lives on a daily basis, so our appearances shouldn't be at the top of the list of things to think about. Imagine what you could accomplish if you put all that energy into something else?

8. “I’ve never seen magazine covers or music videos and been like, ‘I need to look like that to be a success.'"

In a 2013 interview with Anderson Cooper on 60 Minutes, Adele reminded us that we don't need to look any certain way in order to be successful. We also don't need to look a certain way to be happy, find love, follow our dreams, or do something unexpected. Don't buy into the idea that to be a certain body type will promise you happiness. You already have all the tools you need to go after what you want.

9. "Being told how to look is about being a product, and I don't want to be a product."

In Adele: The Biography , Adele pointed out something many of us likely don't think about often: To subscribe to what society deems "acceptable" even if it makes us feel bad about ourselves means we're just letting a culture turn us into products. We're each special, interesting, individual people, though, and if we listen to the rules society cranks out about what we should look like, then we just might be giving up a big part of what we can offer the world: Our uniqueness.