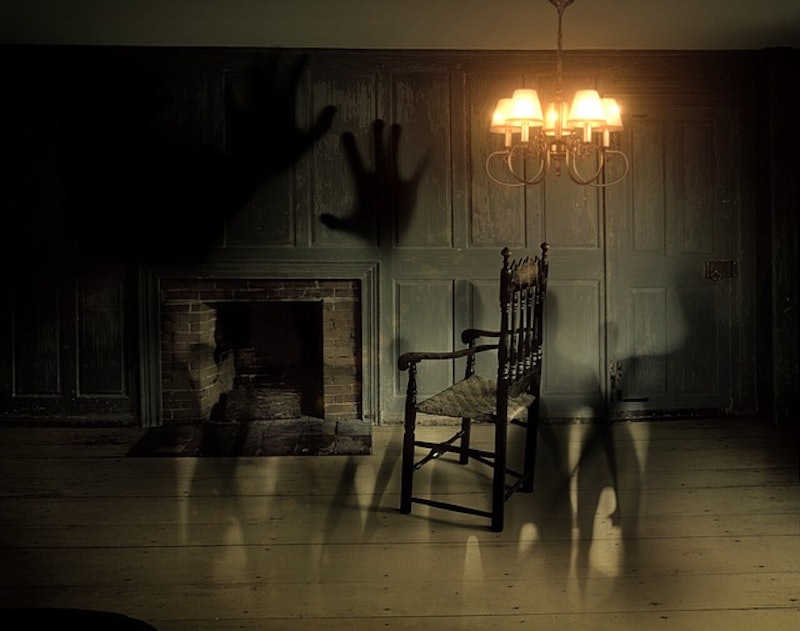 Halloween is the most festive holiday, next to Christmas. Sure, Thanksgiving is an institution, but you probably won't be invited to four or five different turkey-gobbling parties, will you? No, it's Halloween that people want to spend with their friends, family, and even loads of total strangers. But, sadly, some folks just can't get into the scary holiday spirit.

These are the people who scoff at dressing up and pumpkin carving, but they will certainly take whatever candy you have to offer, thanks. They're the Scrooges of Halloween — is there a name for that? But maybe I'm being overly critical. I'm sure some people come by their grump status honestly. After all, I don't know how festive I'd feel after wrestling toddlers into itchy costumes, toting them around the neighborhood, and sorting out their candy stashes to avoid in-fighting.

Whatever the reason may be, if you just aren't feeling Halloween this year, the 20 ghost stories on this list will have you ready to dress yourself in pumpkin guts and hit up the closest haunted wagon ride. Pick out a few of these titles and have yourself a pre-Halloween reading fest, you spoopy person, you. And before you lament, But I don't even have a costume!, trust me: you do.

Shirley Jackson's classic horror story, The Haunting of Hill House, focuses on a group of four individuals determined to unravel the mysteries of the titular manor. But the house has other plans...

The latest installment in the grand tradition of haunted house stories, David Mitchell's short novel, Slade House, follows a series of curious travelers who make it to the strange, hidden mansion, but never manage to make it out.

Worlds of Ink and Shadow by Lena Coakley

For me, the Brontës are the undisputed mistresses of the Gothic novel. Lena Coakley based her upcoming novel, Worlds of Ink and Shadow, on the sisters' juvenilia, but she's added her own twist by turning the girls' writing into alternate realities that threaten to consume their human visitors with madness.

In this Stephen King classic, a struggling writer moves his wife and son to the remote hotel that has hired him on as an off-season caretaker. When snow isolates the family further, it becomes clear that the hotel wants to claim one of the family for its own gains.

White Is for Witching by Helen Oyeyemi

With her mother dead, Minerva Silver returns to her childhood home to spend time with her twin brother and father. But she might have made a mistake in coming back, because the house has a habit of consuming its female inhabitants.

The Graveyard Book by Neil Gaiman

The Graveyard Book centers on Bod, a boy raised by graveyard residents after his family is murdered. Their protections only extend to the cemetery's boundaries, however. One step out, and Bod may fall victim to the killer who orphaned him.

Toni Morrison's Beloved might not strike you as a Halloweeny novel, but it's still a fantastic — and, at times, terrifying — ghost story. Sethe is haunted by the memory of the child she killed to spare the horrors of slavery. When that memory manifests itself as flesh, however, nothing is ever the same.

The eponymous Hell House doesn't like investigators; it's killed two groups of them already. Now a third batch has stepped up to try their luck, but the odds don't look good.

The Woman in Black by Susan Hill

A young solicitor journeys to the moors to oversee the posthumous affairs of an elderly widow. But after seeing a dark apparition in the marshes, he's set to uncover more than a fair share of family secrets.

In House of Leaves, a dead man leaves behind a manuscript concerning a documentary that cannot be proven to exist. Another man finds the papers and tries to track down the film, taking on the difficult task of editing the self-contradictory text. Mark Z. Danielewski's debut novel isn't easy to summarize, and reading it can be a challenge, but it's Kubrick-meets-Blair Witch and you don't want to miss it.

The Lifted Veil by George Eliot

Self-professed psychic Latimer knows how he — and many others — will die, and that's what makes his new sister-in-law so fascinating: He cannot tell her future or read her thoughts.

"I Have No Mouth, and I Must Scream" by Harlan Ellison

This post-apocalyptic horror masterpiece centers on the last five humans in existence. It's been more than 100 years since humanity destroyed itself with supercomputers built for war. Now one of those machines deals out systematic revenge on the last dregs of humankind.

A woman and her two children inherit their estranged ex-husband and father's country home. Little do they know that the house is haunted by two ghosts, who serve as narrators in Lauren Oliver's Rooms.

"The Dune" by Stephen King

Originally published in Granta and now part of Stephen King's forthcoming short story collection, The Bazaar of Bad Dreams, "The Dune" tells the tale of an elderly man obsessed with the mysteries of a deserted island.

There's nothing for Jack in London, so, when the opportunity arises, he doesn't hesitate to hop on-board an Arctic expedition. But he soon finds himself trapped among the ice floes, the only man left — but not alone.

What if your local Ikea was haunted? That's the question driving Horrorstör, a ghost story for the modern era. Employees at an Orsk furniture store get more than they bargain for when they attempt to investigate a series of wares-trashings that only seem to happen at night.

In Dolly, two young siblings are shuffled off to live with an aging aunt and her horrid housekeeper. The outlook is bleak from the start, but when one of the children doesn't get the gift she wants, she throws a fit for the horror annals.

Henry James' The Turn of the Screw follows a young woman to her new position as governess to two small children. She soon fears the tykes may be engaging the evil ghosts of former servants, and grows increasingly wary of her situation.

We Have Always Lived in the Castle by Shirley Jackson

Years after their number is greatly reduced by a grisly massacre, a reclusive family welcomes a cousin to stay. But he may turn out to be more horrific than anything they have yet to encounter.

Barely more than a year after it was the scene of a gruesome mass-murder, a Dutch Colonial house in Amityville, NY gets a new family to terrorize. It may not be a true account — as it was marketed upon publication in the 1970s — but The Amityville Horror still makes for a bone-chilling read.

More like this
16 Novels That Paint A Realistic Portrait Of Abortion
By K.W. Colyard
13 Summer Solstice Quotes To Celebrate The Longest Day Of The Year
By Sadie Trombetta
10 Must-Read New Books Out This Week
By K.W. Colyard
Ottessa Moshfegh Is Happy To Be Your “It” Girl
By Arya Roshanian
Get Even More From Bustle — Sign Up For The Newsletter