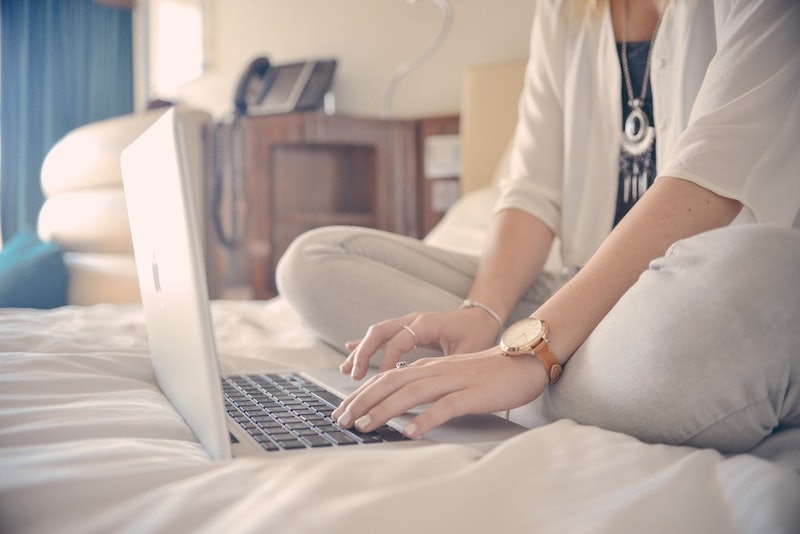 If every headache or twinge in your toe sends you into a panic, then you may have already wondered how to know if you're a hypochondriac. We can all relate to the desire to Google our weird bodily symptoms, and doing so occasionally is totally normal. But it can become a bit of a problem if your health is all you ever think about and the worry is overwhelming you.

Hypochondria, which is now called illness anxiety disorder, is defined as the excessive worry that you are or may become seriously ill, according to the Mayo Clinic. It's not just the occasional worry over a true problem, but an all-consuming anxiety that causes you to constantly monitor your body, and often sends you running to the doctor.

Illness anxiety disorder needs to be persistent for at least six months before it's considered a problem. And it can be triggered in a variety of ways, including a stressful life event, the threat of a serious illness (that turns out to not be serious), a childhood illness, having a parent with an illness, and excessive health-related Internet use, according to the Mayo Clinic.

Constantly worrying about your health can put a strain on your emotional well-being. After all, who wants to be fearing the worst all day long? But it can also affect other areas of your life. Relationships may suffer due to people getting fed up with your constant worry. It can cause problems at work, if you are constantly calling out or taking days off to go to the doctor. And it can create financial problems, since we all know doctor's appointments, tests, and scans are far from free.

Before you convince yourself that you should add "hypochondriasis" to your list of ailments, take a moment to read the list below for some true signs that this may be a problem worth looking into.

1. You Google Every Symptom You Have

Occasionally researching a few weird bodily symptoms is fine, but running to the computer every five seconds is not healthy. Hypochondriacs often cross the line from being prudent to being down right obsessive, according to Robert L. Leahy, PhD in Psychology Today. Think of the last time you went on a Googling spree. You probably sent yourself down a rabbit hole of symptom checkers and Wiki pages about cancer, only to end up convinced you had the most serious tropical disease. While it’s important to be informed when it comes to your health, remind yourself of the needless anxiety you are creating, and try to save your questions for your next doctor’s appointment.

2. You Are Convinced Minor Ailments Are Actually Horrible Diseases

People with an illness anxiety disorder are very tuned into their bodies, and that can be a bad thing. It’s normal to feel little aches and pains throughout the day, but hypochondriacs will immediately assume the worst. “Rather than viewing your body functions as variable and involving occasional discomfort (aches, pains, headaches, nausea, dizziness), you believe that anything less than perfect functioning or feeling is a sign that you have a serious illness,” Dr. Leahy said. “But bodies and functions are not perfect. A headache is likely to be a sign of nothing special. But you may jump to conclusions because your default is death.”

3. You Feel Fine, But Constantly Worry About Getting Sick

If you feel fine, the dread that something may befall you at any moment can be just as sickening as the real thing. Perhaps your friend just came down with an illness, and even though you haven't seen them in weeks, you're now convinced you'll catch it, too. In fact, it's possible to become so distressed over a possible illness, that it can become difficult to function, according to the Mayo Clinic.

4. You Keep Worrying, Even After A Doctor Says You’re OK

So you just got home from the doctor, and he gave you a clean bill of health, but it's done nothing to shake your anxiety. Hypochondria includes the persistent fear of illness, despite reassurance from a health care provider, according to the University of Maryland Medical Center. Those with illness anxiety disorder require near constant reassurance that they are healthy, so they may take their worries straight from their doctor's appointment to lunch with friends. Their health may be the only thing they ever talk about, because the fear is constant and all-consuming.

Since hypochondriacs are never quite convinced that they aren't ill, they may go for second, third, or even fourth doctor's opinions. They may be convinced the doctor missed something, or that another test or scan is necessary to prove they aren't sick. Some people even shop around for different doctors until they find one that agrees they are seriously ill, according to WebMD. These constant doctor's appointments can start to interfere with a person's work, family, and social life. Oftentimes illness anxiety disorder will cause people to pull away from you, because they are tired of hearing you talk about your health. It can also cause financial problems, since the costs of exams and time off from work can add up quickly.

6. You Are Convinced An Illness Will Progress

Generally a hypochondriac's fear is disproportionate to what is actually going on, even if they are truly sick, according to the Cleveland Clinic. You may think something is life threatening when it's not, or feel the need to constantly monitor yourself for signs of progression. This desire to "stand guard" 24/7 is a way of feeling like you are protecting yourself. "If you have a long history of false predictions, doctor shopping, reassurance-seeking, and miserable worry, then you are not protecting yourself — you are harming yourself," Dr. Leahy said.

The symptoms of hypochondriasis go on and on, but the main points are: a preoccupation with your health, excessive worry that you are or may become sick, and the desire to constantly check yourself for illness. It can become quite a serious problem in and of itself. So if this sounds like you, be sure to ask your doctor for ways to alleviate your anxiety.

More like this
These 4 Signs Are The Sarcastic Jokesters Of The Zodiac
By Brittany Beringer
These 4 Signs Are The Seductive Sirens Of The Zodiac
By Brittany Beringer
The 3 Most Family-Oriented Zodiac Signs, According To An Astrologer
By Nina Kahn
Here’s Why Sagittarians Should Pursue A Career In Academia
By Nina Kahn
Get Even More From Bustle — Sign Up For The Newsletter