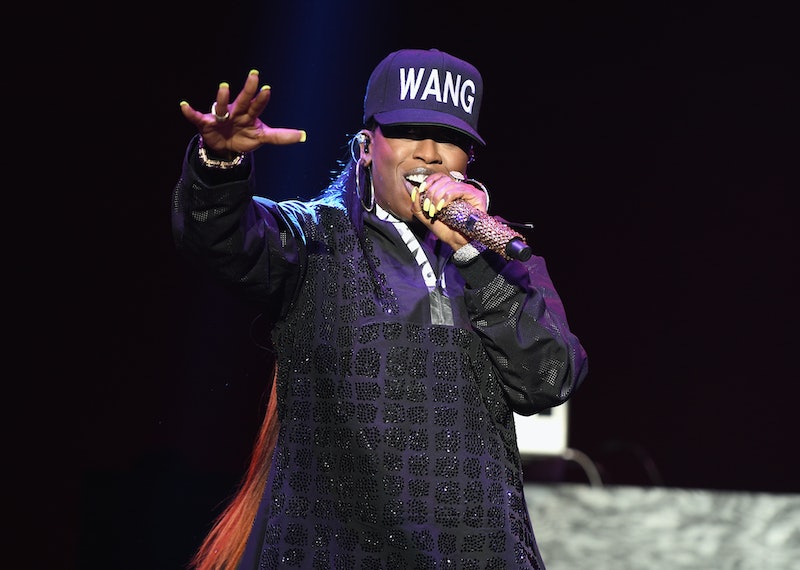 The internet got very excited on Tuesday when the first snippet from Missy Elliott's new song previewed on ESPN during Monday Night Football's halftime show. "WTF (Where They From)" is a collaboration with Pharrell, and will apparently be featured during ESPN's NBA game and studio coverage throughout the start of the season. A music video for Missy Elliott's new song has already been filmed, and it's great to get a sneak peak of what Elliott's been working on, as we've been looking forward to it for a very long time.

Talk of a comeback from Missy Elliott has been swirling since she performed with Katy Perry at the Super Bowl halftime show in February 2015. It was super exciting to watch Elliott perform with Perry, who couldn't have looked happier to have such a legend performing alongside her. In September 2015, Elliott headlined the Bestival, a music festival in the UK which attracts up to 80,000 people every year. Elliott's last album, The Cookbook, was released in 2005. Since then, she's steadily recorded collaborations with artists such as Demi Lovato, Timbaland, and Justin Timberlake, as well as often working on remixes for other artists. Elliott is also a prolific writer and producer.

Hopefully the full video will be here soon. But for now, enjoy the snippet of "WTF (Where They From)" below.

More like this
Rihanna Tells Us To Shush About New Music In Super Bowl Halftime Show Trailer
By Jake Viswanath
'Breaking Bad' Duo Walt & Jesse Are Back — In This Super Bowl Commercial
By Jake Viswanath
Twitter Is In Awe Of Taylor Swift’s “Lavender Haze” Music Video
By Jake Viswanath
Twitter Wants To Dance With Anne Hathaway At Paris Fashion Week
By Alyssa Lapid
Get Even More From Bustle — Sign Up For The Newsletter
From hair trends to relationship advice, our daily newsletter has everything you need to sound like a person who’s on TikTok, even if you aren’t.