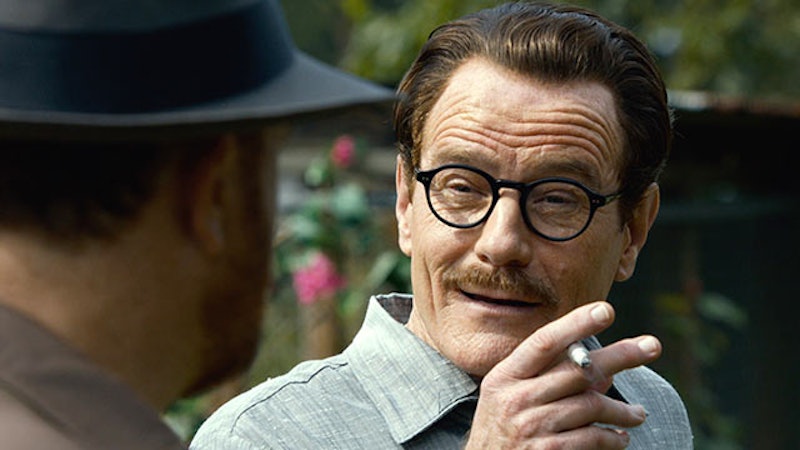 In the new film from director Jay Roach, Trumbo, Bryan Cranston portrays the title character, Dalton Trumbo, in 1947 Hollywood. Trumbo is considered one of Tinseltown's top screenwriters until he and others like him are blacklisted and jailed for their involvement with the Communist Party. While banned from working in the film industry, Trumbo continues to write movies in secret, using other people's names to get his movies made. It's a fascinating story about an regretful time in American history, and in the the movie industry, but did it actually happen? Is Trumbo based on a true story?

Yes, Trumbo is a biographical film about Dalton Trumbo, who really was a successful Hollywood screenwriter blacklisted in 1947 for being a Communist. Trumbo was a member of the Hollywood Ten, a group of blacklisted creatives who were jailed for contempt after refusing to testify before Congress's House Un-American Activities Committee. He really did continue writing after being blacklisted, too, using pseudonyms or collaborating with other screenwriters to front for him on an estimated 17 scripts. And these were not insignificant movies Trumbo was writing, either. He penned blockbusters like Exodus and Spartacus while blacklisted, though they each received proper billing by the time they were released, and two of his scripts were awarded Oscars, unbeknownst to the Academy of Motion Picture Arts and Sciences: Roman Holiday, which was fronted by Ian McClellan Hunter, and The Brave One, written under the pseudonym Robert Rich. Trumbo began restoring his image in the 1960s when blacklisting fell out of style, and he was fully exonerated (though posthumously) in 2011 when he was given credit for writing Roman Holiday .

The blacklist scandal was a dark time for the film industry, and it's refreshing to see modern Hollywood call out its prior faults so bluntly in a film. But Trumbo isn't the first time Hollywood has been critical of its own past. Here are five other times the film industry has shone a light on its darker times.

George Reeves became a star playing Superman on the 1950s television show The Adventures of Superman, but allegedly, his frustration with being typecast in the role combined with the shady Hollywood pay scale of the day left him broke and out of work. He died of a gunshot wound to the head, originally ruled a suicide but later suspected to be a murder. This film, starring Adrien Brody, provides a fictionalized account of the investigation surrounding his death.

Joan Crawford was one of the most popular actresses of her day, and that privilege allowed the film industry to turn a blind eye to her allegedly abusive behavior toward her adopted children. Those claims of abuse are depicted in this film, produced by Paramount Pictures, the only major studio for whom Crawford never appeared in a movie.

Director Melvin Van Peebles' 1971 film Sweet Sweetback's Baadasssss Song is largely credited with proving to Hollywood that black audiences existed and would see movies, too, but getting the film made was no easy task in the racist Hollywood environment of the time. This film, which is written by, directed by, and stars Van Peebles' son Mario, shows the director's struggle against the status quo.

The all too familiar story of Hollywood excess leading to a actor's downfall, Hogan's Heroes star Bob Crane appeared to be the consummate family man, but he was allegedly a rampant sex addict with a penchant for videotaping his conquests. He was reportedly enabled by those around him thanks to his star quality, and wound up murdered in a case that has never been solved.

The rich and powerful have always had an influence on Hollywood, and that's put on full display in this movie as publishing magnate William Randolph Hearst uses his wealth and power in an attempt to stop the production of Orson Welles' Citizen Kane. Hearst obviously failed, as Citizen Kane is considered one of the greatest movies ever made, but the film still shows the powerful outside forces that can sometimes work against Hollywood creatives.

Hollywood can take itself too seriously sometimes, so it's comforting to know that the film industry seems to be aware that it is not infallible. Trumbo looks to be another example of that belief, and is proudly righting a wrong from Hollywood's past.

More like this
Everything To Know About Marvel’s 'Thor: Love And Thunder'
By Grace Wehniainen
Sadly, 'Fantastic Beasts: The Secrets Of Dumbledore' Isn’t Streaming — Yet
By Arya Roshanian
Laura Dern Said “Cultural Awareness” Made Her Rethink This 'Jurassic Park' Fact
By Grace Wehniainen
Colin Firth Revealed His Favourite Mr. Darcy (& No, It's Not Himself)
By Sophie McEvoy
Get Even More From Bustle — Sign Up For The Newsletter