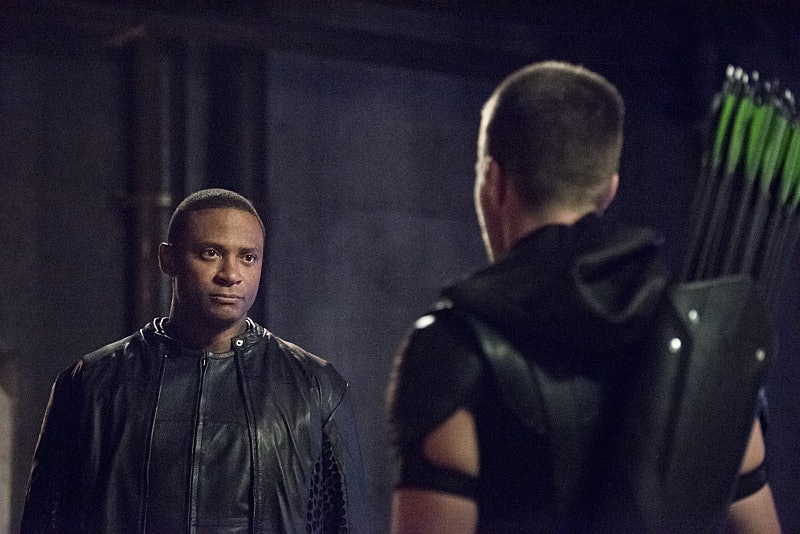 Damien Darhk is ensconced in Star City, and Team Arrow is knee-deep in missions, doing their best to protect its citizens. And while the season has been exciting so far, I can't stop wishing I could fast-forward to the end to find out who Oliver and Barry are paying their respects to in the flash-forward. Who will die on Arrow, filling that grave we saw in the season premiere, and how did that person end up there? Some fans have guessed that Oliver's emotionally estranged partner John Diggle will be killed off by season's end, and that's forcing me to consider one of the worst possible outcomes of this particular battle. But after some consideration, I've decided that I don't think this is his time. Diggle won't die on Arrow Season 4, because that's just not the arc the show is building.

Season 3 ended with Diggle and Oliver on opposite sides of a rift. Oliver kidnapped Diggle's wife Lyla during his brief stint as Al Sah-Him, in a string of reckless acts designed to bring down Ra's al Ghul. Your best friend endangering the life of your wife would be harder to get over than, say, that time he remembered to invite everyone but you to see The Hunger Games: Mockingjay - Part 1 at midnight. So it's been slow-going this season as the two try to reconnect both as partners and friends. David Ramsey told Access Hollywood (as reported by Yahoo News) that Diggle's issues with Oliver are more character than personality based, however. They use different methods to tackle the same problems, and it inevitably causes them to butt heads.

Well...I don't know if he's mad at Oliver. He's at a place where he understands that Oliver is a person that doesn't work well with a team and [Diggle] is a military guy, right? Special forces, Army Ranger, he's all about [the unit], he's all logistics and sharing with the squad and you're only as good as your weakest link. This is Diggle's background. This is who he is, so Oliver learned just the opposite on the island.

Since Felicity and Oliver have returned from their suburban sabbatical, Team Arrow has been seeking a new equilibrium. Ramsey also told Access Hollywood that Diggle and Oliver "have needed each other a great deal;" their differences can't be insurmountable, because they both serve distinct purposes in their missions. It's why they work well together. Diggle's name can't be on that tombstone at the end of the season, because it will disrupt the narrative of partnership and compromise that Arrow has been constructing. Plus, Barry and Oliver are quietly mournful in the flash-forward, but their mannerisms don't read as the loss of a good friend and comrade to me. Diggle's death would provoke a more emotional response, and surely Oliver would be standing there with Felicity when Barry walked up, instead of alone. They're the originals, after all.

Arrow just pulled Oliver Queen out of the darkness that made for a disjointed and dour Season 3. The death of John Diggle would throw him right back into that place, to the detriment of the show. Diggle just can't die this year, or hopefully ever.