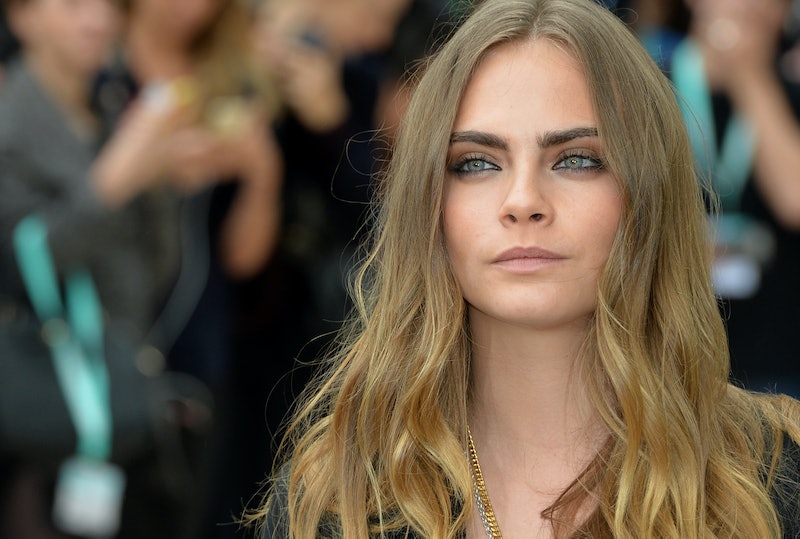 Who is this raven-haired, soot-covered, chain bikini-wearing warrior goddess posing for a magazine cover? Oh, that's just a completely unrecognizable Cara Delevingne covers Empire as Enchantress. The supermodel is in character and promoting her role as a sorceress in the upcoming Suicide Squad film. She looks nothing like her familiar, bold-browed, beachy waves-havin', and beautiful self.

I only know that this is Delevingne because she Instagrammed the photo on her official feed. Well, that and the fact that I am aware that she has a part in this much-discussed, hugely anticipated movie that I cannot wait to see.

Other than that, I'd totally think you were yanking my chain if you showed me this and told me it was the British beauty without any context clues or prior knowledge of her acting gigs!

For Delevingne's Empire cover, she is as badass as she has ever been and likely ever will be! That's saying something, too, since the model is a bit of a rebel and isn't a conventional, play-it-safe runway strutter with acting aspirations.

Delevingne rocks a thicket of black hair and dark-rimmed, smoky, and smudgy eyes. There's nary a trace of her signature, bushy brows in this image. In fact, it's all about those demonic eyes and the fierce stare.

Cara, are you in there? This is a true case of an actress transforming physically for a role. It appears that Delevingne went all in to play June Moone and her Enchantress alter ego.

Delevingne told Empire that her character is "an ancient sorceress. A feral being. She's been trapped for so long and now she's finally let out." Lookout!

Enchantress may be ancient and she may be feral. But she's also a whole different kind of breathtaking. Judging by her stare and her ensemble, would you mess with her? I think not.

Delevingne has some unusual and fun mag covers in her repertoire. She rocked '60s bouffant hair and mega mod lashes for Look. It was a throwback from another era. Not from an ancient era, like Enchantress, but from the past nonetheless.

Her face was framed by a cascade of '80s-approved, golden curls for Allure in 2014. But something tells me her Empire cover might be the most memorable, even if she is unrecognizable on it.