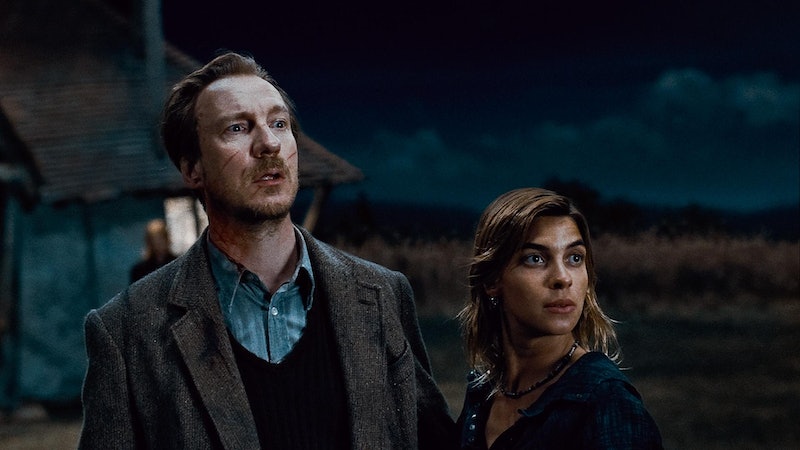 I get it. I am a mere mortal, and I do not get to play Harry Potter god. And while I will forever give my respects at the altar of J.K. Rowling, both my hero and my religion, there were a fair number of things that Harry Potter fans wished were different in the books — even while acknowledging that some of those things had no chance of making it into the books in the first place, or were even vaguely appropriate for them.

It is from this restless seed that the new dawn of fan fiction was reborn in the late '90s and early millennium, resurrected from its early Star Trek-inspired origins. Like many a fan, this is where I got my start; my first fan fiction was the same Harry Potter prequel we all decided to write in fifth grade. (Erm, right?) I was never as existentially fraught as the rest of my friends were when major happenings went down in the books, because anything I didn't want to accept as canon I could just rewrite myself, or read from other fan fiction authors. Sweet deal, right?

But enough time has passed since the series ended that it's time to Get Real — out in the big wide open, and not just under an anonymous pet name with an icon of someone else's fan art posted to it. Here are all the things that Harry Potter fans would change about the books, if they had a Time Turner of their very own:

Say what you want about Durmstrang, but none of them ever hexed each other in a hallway over lost House points. I thought a huge point of the series was emphasizing just how wrong it was to separate people based on their differences, and how it was breeding unnecessary hostility that clearly continued well on into adulthood. Seriously, give me one reason why they should keep the Houses after all the trouble it's caused. (Maybe I'm just too much of a Hufflepuff for my own good.)

There Would Have Been Some Mention Of Sex — Seriously, Anywhere At All

Don’t tell me those wizards weren’t down to clown because of Voldemort. Dark times bring people together, and I find it statistically impossible to believe that not one of the members of Dumbledore’s Army would have gotten caught having hot, steamy, pubescent sex in the Room of Requirement. The only evidence we have that any wizards had sex in the course of those books was Most Awesome Accident Ever, aka Teddy Lupin, and if Remus “Don’t Touch Me I’m A Werewolf” Lupin forgot to use wizard birth control then TELL ME THAT SOME SIXTH YEAR WOULDN’T HAVE ALSO MADE THE SAME MISTAKE.

I understand that it was originally intended to be a children's book, but if the books were willing to get as dark as they did, mentions of sex, even in the artful "..." way, wouldn't have been a huge stretch. It could have been a platform for normalizing sex for a generation that grew up not always sure of themselves, and it would have made the characters a lot more realistic. Not that I think it's weird that they weren't having crazy hot sex at 16 and 17, but it's definitely weird that thoughts about it are never mentioned, when that is an age fraught with sexual confusion — no matter how many horcruxes you're trying to destroy.

Draco Malfoy Would Have Been Redeemed

I don't even like Malfoy, so this isn't coming from a place of "OMG my faaaaave". And I fully acknowledge that J.K. Rowling shows him in the epilogue as relatively unchanged because that is a realistic fact of life, that terrible people are generally that way for the long haul. But ugh, it would have been so satisfying. Rose and Scorpius and Albus as #SquadGoals. Malfoy realizing the error of his ways and apologizing to Hermione. I've been conditioned for so long to expect plot lines where the villain confesses their sins and helps to make the world a better place by acknowledging them — and to be fair, we got that with Snape. But Snape's dead. It's Malfoy who is still alive, perpetuating his suckage, and it just seems so defeatist after everything they all went through, even if it is highly realistic of the situation.

I know, I know. There's this beautifully poetic moment when it comes full circle, and Harry's life is spared because of his earlier mercy, and we learn a lot about him as a person that he refuses to kill Peter outright. But would he have even needed his life to be spared if Peter hadn't helped Voldemort return to power in the first place? I acknowledge that Voldemort is a tricky little bastard and would undoubtedly have found some other way, but this is "things we wished had happened," not "things that would logically have made no sense in the books," and I hated Pettigrew and wanted him hella dead. Anybody who is willing to kill his best friends and murder their baby is beyond redemption.

All Of Our Faves Would Have Lived

My grief for these characters is basically on rotation. On Mondays I'm sad about Fred. On Tuesdays I'm bawling on the subway over Tonks and Lupin. By Saturday I'm dead inside thinking of Dobby. And I understand that they had to die. I understand that this was a realistic, brutal, unflinching depiction of what it is like in a time of war, and that life isn't fair, and that there aren't any happy endings untinged with sadness. But. But. But.

Oh, hey, sorry. I didn't see you there. I was just busy listing off all the names that would be less mean than NAMING YOUR SON ALBUS SEVERUS. But hey, at least it gives us some pretty ripe plot material for Harry Potter and the Cursed Child, if I ever get around to selling my left kidney to see it.