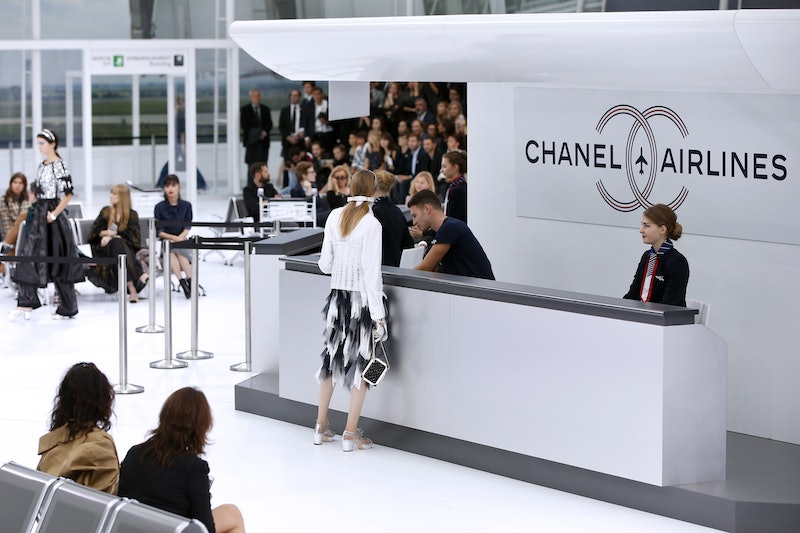 Looks like that elaborate "Chanel Airlines" set at Paris Fashion Week was foreshadowing some major news for the label. Two of my bucket list items — a certain Caribbean island nation and a certain French fashion house — are about to collide. Chanel announced plans to present its Resort 2017 collection in Cuba, according to Vogue, and visions of ruffles, embroidery, and antique cars — all with a distinctly Lagerfeld-ian touch — are dancing in my head.

The show is set for sometime in May 2016, although the brand will have a layover in Rome in December for the Metiers D'Art collection, which last year was held in Salzburg, Austria.

Besides the two most recent Metiers D'Art destination, Lagerfeld, and his legion of loyal fans and gaggles of models, have been tattooing their passports for Resort shows in Seoul and Dubai, although the Havana show will be the house's first in Latin America. Lagerfeld also famously turned the Great Wall Of China into a runway for Fendi in 2007, and other designers followed suit with destination fashion shows; Dolce & Gabbana took to Taormina in Sicily for a standout couture presentation in 2012, and Louis Vuitton made waves in Palm Springs, drawing crowds of chic spectators to the desert (post-Coachella!) just last May.

Fashion often doesn't get enough credit for how closely it's aligned with politics, current events and culture in general. Chanel's big announcement, which comes on the heels of newly reinforced relations between the U.S. and Cuba, is proof positive that fashion is anything but simply frivolous.

And, although there are a handful of Cuban fashion designers that are respected players within the industry (Narcisso Rodriguez, Isabel Toledo and Alejandro Ingelmo among them) Chanel is a household name globally, and any move Lagerfeld makes draws international eyes.

Translation: this could be more than a fashion show. Whether this is a conscious move on the brand's part or not, it could be read as a political statement about the the re-opening of Cuba to the US and Cuba's place in global affairs. A nod from the prestigious fashion house is a huge endorsement that, IMO, could have major effects on tourism to Cuba, trends within the industry, and, on a more general level, is sure to spur awareness and conversation about Cuba.

That said, I still cannot wait to see all the street style and front row pics from the fashion show, which are sure to be absolutely incredible. Side note: There aren't many photographs of Cuba in general, so this show will definitely be an important photo op for giving the world a peek into Cuba, even down to the easily-accessible social media level. Is it May yet?