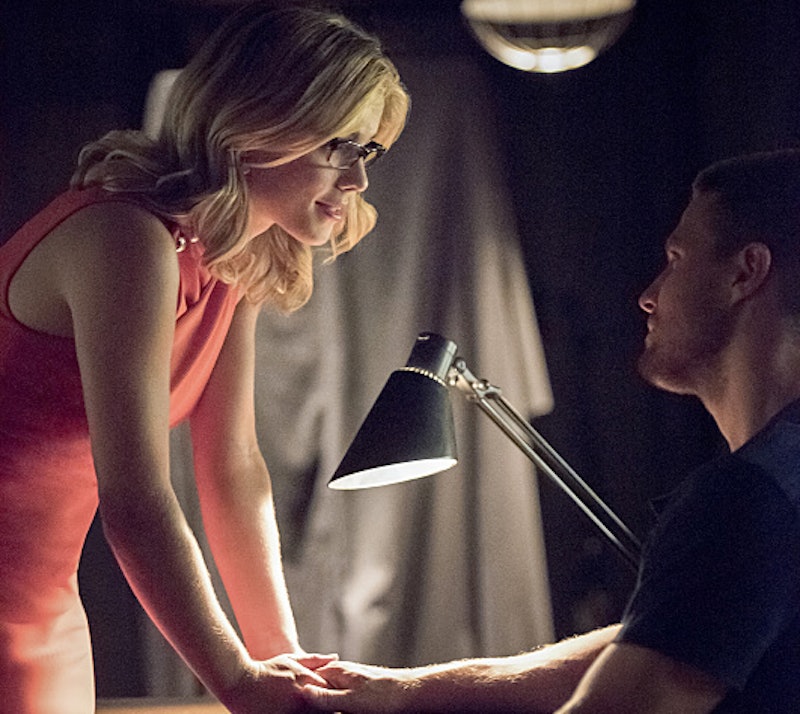 We may only be a few episodes into the season, but Arrow Season 4 has already given us several burning questions to obsess over. For starters, there's that whole mystery grave ordeal, which will inevitably lead to me weeping in a corner somewhere, regardless of whose death it ends up being. But then there's also the more light-hearted questions to ponder — like whether or not Oliver and Felicity will get engaged on Arrow at some point in the near future. We know that Oliver has the ring and that it's currently hiding in their living room, so it's only a matter of time before either a.) Felicity discovers it herself, or b.) Oliver decides to gather up his courage and pop the question. And while I'm so rooting for the continued success of this amazing romance, I can't help but wonder if an engagement is the right move for the show at this point in time.

Now please don't misunderstand me. I'm a hardcore Olicity 'shipper through and through. In fact, I've hoped for this relationship to come to fruition since Day 1. So it's not a matter of whether I want them to be together because I totally do. It has more to do with bringing marriage into the equation. Because while I certainly don't hate the idea (an Olicity wedding would be downright adorable), I'm willing to admit that this decision could change the show and not necessarily all for the better. Which is why I've come up with a helpful pros and cons list to help figure out if now is the time for these two crazy kids to say "I do."

PRO: It Would Mean Seeing Oliver In A Tux

Which is almost as good as seeing Oliver shirtless. Almost.

CON: It's Still Really Early In Their Relationship

Granted, they've known each other for quite some time now, but that doesn't mean they have to shift their romance into full throttle mode. Things are going great as they are right now, so why rush it?

PRO: Felicity Brings Out The Best In Oliver

Seriously, I have never seen him smile as much as he has already this season and I gotta admit, I'm a fan. There are times when I enjoy a good manly brooding session, but it's also nice to see this lighter side to our vigilante. Happiness looks good on him and it's all in thanks to Felicity's positive influence. So getting married would only help to enhance that aspect.

CON: It Could Put Felicity's Life In Greater Risk

Many viewers (myself included) are already worried that the person who dies in that flash forward is Felicity. If she becomes the Green Arrow's wife, that could place an even bigger target on her back and turn that dreadful prediction into a reality.

PRO: They're Meant To Be

And in the end, that's all that really matters, isn't it? You can't fight a show's OTP. Plus, did I mention that whole Oliver-in-a-tux thing? Because I really can't stress that point enough.