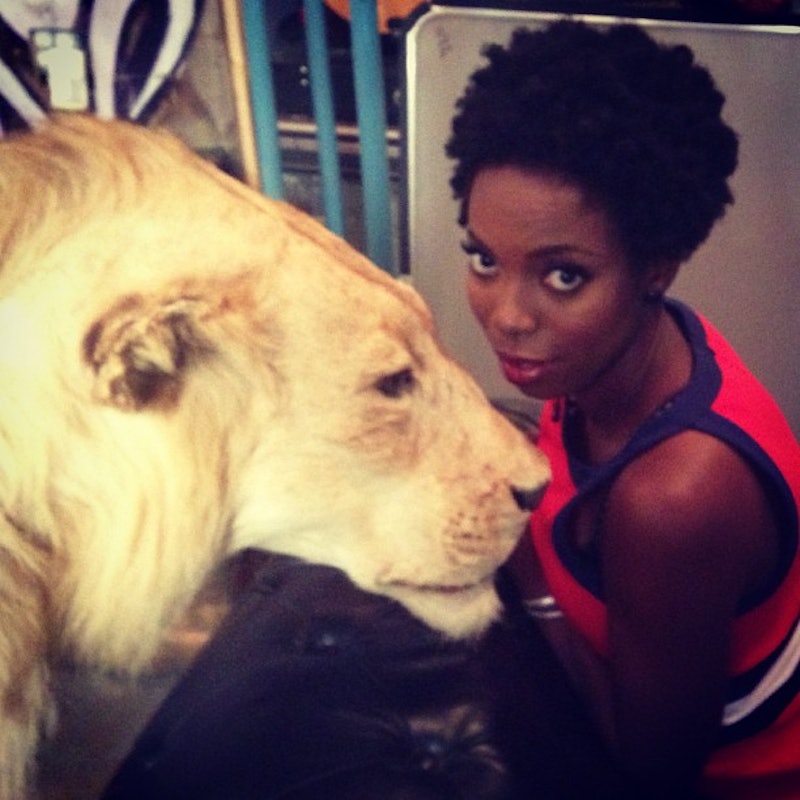 This week in "It's About Goddamn Time:" Saturday Night Live finally scraped their shit together marginally enough to add the amazing and talented Sasheer Zamata to the SNL cast. Zamata, 27, will be the show's first black female cast member in five years, after the departure of Maya Rudolph. Her first appearance on SNL will be on Jan. 18, the first episode after the show's winter hiatus, with Drake as host.

It's a promising start for NBC's long-running sketch show in the new year, especially after 2013, which we can dub The Year People Finally Got Fed Up With SNL's Conspicuous Whiteness. After adding five new players earlier this fall, four of whom were men and one of whom was a white woman, Lorne Michaels found himself knee-deep in criticism for not diversifying the cast when he not only had the chance, but the responsibility to. So Michaels quickly slopped together some late-in-the-game auditions to add a black woman to the cast, both in Los Angeles and New York, and had this nonsense about quotas to tell the New York Times regarding the incredible roster of talent that showed up (which include final-rounders Natasha Rothwell and Kerry Coddett): He believed that as many as two performers could potentially be considered, but he did not want to add too many women at this time because the cast already includes five.

Good god, man. Your New Year's Resolution should be to just be quiet.

Here's an interesting thing to note about Zamata: she has been an outspoken critic of SNL's bigoted blunders this year. After Kenan Thompson shot his own foot by saying there just AREN'T any funny black girls out there, Sasheer posted a link on her Tumblr to her own web series as proof that there damn well ARE funny, smart black female comedians doing work. Come to think of it, that might cause some workplace awkwardness for Kenan, who should still be ashamed of himself.

Hiring Zamata doesn't necessarily mean SNL has solved much, though. Zamata is joining a show that already has hella problems (that are not her responsibility to fix, I might add) and while she will be an incredible addition to the cast, I hope Lorne Michaels is not of the mind that hiring ONE black woman absolves him from past discrimination, or — god forbid, but it's likely — future racist missteps.

Featured players on the show rarely get airtime in their first year, so that's already cause for concern. But more pressing, Zamata — while a phenomenal actress — is also a stellar writer, and her content focuses on her experience as a woman of color. She's been hired on SNL to act, but it would be a damn shame if she did not also get a chance to contribute in the writers' room.

To be blunt, Zamata is a wild card for the timid white dude club that SNL has become. In October of this year she wrote a sketch called "Be Blacker," performed by her friend Byer. In it, Byer goes to an audition where a condescending casting agent (a white woman) goads her to "be more urban," aka "be blacker," aka minstrel it up. It's hilarious and gross and un-fucking-comfortable, and kiiiiiiiind of the exact crap that SNL itself has perpetuated:

Hiring Zamata was definitely the right move, but it doesn't end there. She will have a presence on the show, but hopefully they will have the sense to allow her voice and her input to shine, as well. Hey, at least now we have a solid reason to tune in to SNL weekly!

And here's some nice news, for you. Kerry Washington was one of the first to congratulate Zamata via Twitter:

Washington hosted SNL earlier this year and probably had to act like she was "in on the joke" that SNL had a diversity problem.

More like this
Who Is Pete Davidson Dating? He "Courted" Emily Ratajkowski At A Knicks Game
By Jake Viswanath
Amanda Gorman Shared A Powerful Message On Meghan Markle’s Penultimate Podcast
By Darshita Goyal
MOBO Awards Found Kanya King On The Woman Whose Grit & Determination Spur Her On
By Kanya King
Here's The Role Lady Susan Hussey Played At Buckingham Palace
By El Hunt
Get Even More From Bustle — Sign Up For The Newsletter