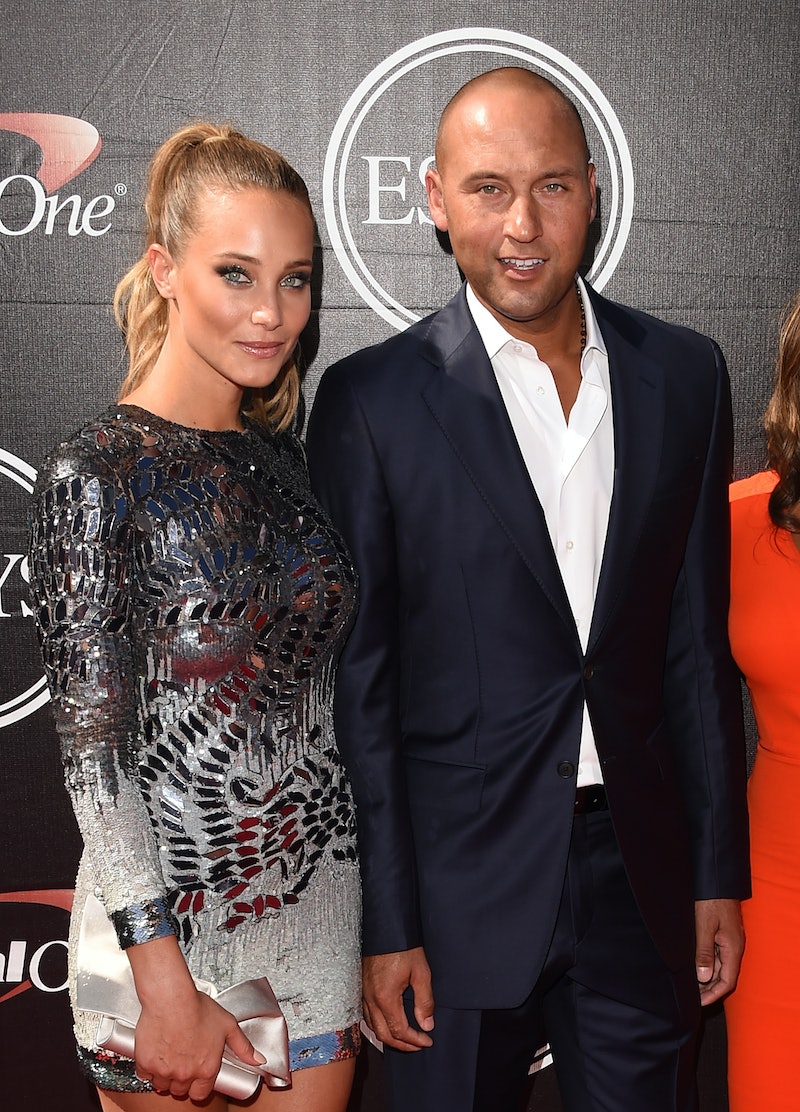 If you're interested in the personal lives of celebrities, especially when it comes to a certain baseball player and model, then you're going to probably enjoy this news. On Wednesday, Page Six reported that Derek Jeter and Hannah Davis are engaged. Per a source, "He proposed on Sunday. It was for their [three-year] anniversary." Reportedly, the former New York Yankees shortstop has been planning on proposing to Davis for quite some time now. Page Six even reports that he asked Davis' parents for her hand in marriage "a few months ago." Neither has commented on the engagement rumors, but until then, let's get to know them a bit better. So, how did Derek Jeter and Hannah Davis meet?

(Update: Jeter confirmed his engagement on his website by referring to Davis as his fiancée.)

Well, I wish I could give you all the juicy details about their first encounter, but I can't. For the past three years, both have been very secretive about their relationship. Who can blame them? When you're constantly in the spotlight, I'm sure you want your personal life to remain at least somewhat private. Anyways, even though I can't dish about exactly how they met, I can tell you when they were first spotted together and made headlines as a couple.

According to a 2012 Page Six report, the 41-year-old athlete and 25-year-old Sports Illustrated Swimsuit cover model were first seen in March 2012 at a Tampa, Florida restaurant. Then, in August 2012, Jeter and Davis were spotted in New York at The Double Seven lounge, where a witness said, "They were flirting, having a great time, and were sitting close together." Another source added, "They are an item on the quiet."

There's no doubt about that. They've reportedly been on and off for the three years they've been linked, in addition to keeping their relationship on the down low. As E! News reported in May 2015, Jeter and Davis made their red carpet debut at the Met Gala (above). That's right, after three years of dating, this was the first time they ever walked a red carpet side by side. I guess they like to keep everyone no their toes, all while not conforming to Hollywood when it comes to letting their relationship be put under a microscope.

If their engagement is anything like their relationship and learning anything about how they met, fans of Jeter and Davis are probably going to be waiting a long time for details and some type of confirmation. At this rate, they will probably get married before commenting about their rumored engagement.

More like this
Is Megan Fox Pregnant? MGK Gave A Shout-Out To Their “Unborn Child” Onstage
By Hugh McIntyre
Kelly Osbourne Found Love In Her Best Friend & Now They're Expecting
By Vivian Iroanya and Rachel Mantock
Sasha Lane’s Greatest Love Of All Is Her Daughter
By Sophie McEvoy
20 Celebrity Couples Who You Forgot Dated In 2002
By Jake Viswanath
Get Even More From Bustle — Sign Up For The Newsletter