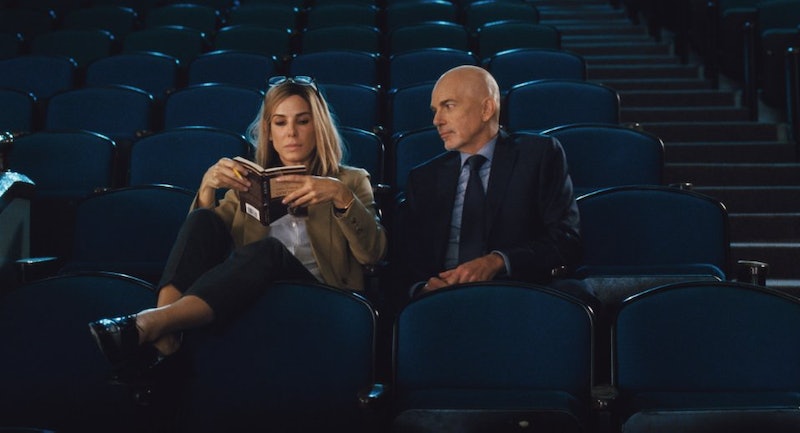 If one were to Google "women reading," among the first results would be an image of Lucille Ball and Vivian Vance — Lucy and Ethel of I Love Lucy — reading How to Speak French and Italian, respectively. They have bemused looks on their faces because, ladies, we know how tough those past participles can be. There's also a black-and-white shot of two women stealing glances at the once-banned book Lady Chatterley's Lover, and several stock images of women reading in their undergarments. In most of these Victorian-era souvenirs, it's amazing the women depicted can focus on the words while posing seductively and not even looking at the page. Womenreading.tumblr.com exists; BuzzFeed published a list entitled "28 Women Reading While Sexy" last summer. So yes, women read, and they've been photographed doing so. But rarely is a woman's erudition caught on camera as both a humorous aside and a political plot, as Sandra Bullock's literary references in Our Brand Is Crisis are.

Bullock's character "Calamity" Jane Bodine possesses a vast trove of allusions to writers and thinkers spanning antiquity through the 20th century. She summons quotes from Sun Tzu in the same breath as she flashes her "great ass" out a bus window at the rival political team. At times, her peers grow exhausted of her grandiose speeches peppered with big ideas by way of Muhammad Ali, but then she turns around and uses her encyclopedic knowledge to trounce the opposition.

Not all literary and historical references in Our Brand Is Crisis are used to advance a subplot; some are just fun Easter eggs designed to test how much we're paying attention, and to make it that much more plausible when they do serve a narrative purpose. So here they are: all the references Jane makes throughout Our Brand Is Crisis.

One of her first rallying cries is a quote from The Art of War by Sun Tzu. When Jane's candidate Pedro Ignacio Castillo is egged by an irate Bolivian, Castillo strikes back, punching out the man. (A definite no-no for a presidential hopeful.) Jane storms into the office where his team is drafting an apology and cries, "If your opponent is of choleric temper, seek to irritate him. Pretend to be weak, that he may grow arrogant." Basically, the egging was a scheme by the opposition designed to make Castillo look bull-headed, knowing that he wouldn't be able to resist the provocation.

Jane cites Sun Tzu periodically over the course of the film — later, she says, "If his forces are united, separate them." It's basically her mantra for her political strategy, and, spoiler alert, it works.

2. Beyond Good And Evil By Friedrich Nietzsche

The most frequently quoted segment of Beyond Good and Evil is the ubiquitous "abyss" reference — "When you gaze long into an abyss the abyss also gazes into you." But what precedes it is perhaps even more apt in the context of Our Brand Is Crisis: "He who fights with monsters should look to it that he himself does not become a monster." If Sun Tzu's Art of War is Jane's modus operandi, Nietzsche's Beyond Good and Evil is the little demon looking over her shoulder. She's haunted by the tragic suicide of the daughter of an opponent politician, the cause of which remains pretty ambiguous over the course of the movie.

3. Enter The Dragon With Bruce Lee

Scrawled in my notes from watching the movie is the incomplete quote, "A man's strengths flow..." But much as it might sound like a great thinker of antiquity, when you pop that in Google, it reveals that this quote is actually a fragment from the Bruce Lee martial arts film Enter the Dragon: "A man's strength can be measured by his appetites. Indeed, a man's strength flows from his appetites."

Machiavelli is both represented (in Jane and her nefarious foil Pat Candy, played by Billy Bob Thornton) and actually quoted. The 15th- and 16th-century Italian thinker is perhaps best known for The Prince, though he also wrote his very own Art of War.

He might be an unexpected figure to appear in Jane's arsenal of quotable figures, but director Warren Beatty has come up with gems like describing his directorial process as a "fascist dictatorship."

When Jane wants to go negative — though she's assured time and time again that Bolivian voters don't respond well to negativity — she references "Daisy." What she means is the infamous attack ad aired just once during the 1964 presidential elections, aired by Lyndon Johnson's campaign as an assault on Barry Goldwater. Goldwater proposed an aggressive nuclear stance, and in 60 seconds, the Daisy campaign alludes to the nuclear annihilation of little American girls while Johnson declares that "these are the stakes." Johnson won a landslide victory over Goldwater that year.

Jane quotes yet another influential figure, and Ben, one of the consultants on Castillo's campaign, finally tells her he's had enough of the Sun Tzu quotes. No, she tells him, that wasn't The Art of War — it was a different master fighter entirely. Muhammad Ali.

8. The Wealth of Nations By Adam Smith

Jane discusses the "invisible hand," a sociological and political concept first explored by Scottish philosopher Adam Smith in The Theory of Sentiments but then fully expanded in his key work, An Inquiry into the Nature and Causes of the Wealth of Nations. The invisible hand is a metaphor to theorize how indirect consequences of individual actions may have a greater benefit for society than projects designed expressly for the greater good.

Jane sits in a lecture hall where a presidential debate is scheduled to take place, and she's soon joined by the devious Pat Candy. He catches her reading Goethe's Faust, a dramatic account of the German myth. They talk Mephistopheles, the diabolical figure with whom Faust makes a wager for his soul, and Jane repeats a quote that has been translated as, "It may be alright to have a power that is based on guns; however, it is better and more gratifying to win the heart of a nation and keep it."

Except that quote that Jane told Candy was from Faust? Her mistake — it's Joseph Goebbels, Nazi propaganda guru. But she sufficiently deceived Candy, and he includes it in a speech for his candidate (who has already been accused of fraternizing with Nazi war criminal Klaus Barbie).

Anarchist and activist Emma Goldman is quoted at a moment when the film's tone shifts from optimism to cynicism: "If voting changed anything, they'd make it illegal." It might be apocryphal; Goldman actually wrote a related remark, "There is no hope even that woman, with her right to vote, will ever purify politics." Mark Twain has also been quoted similarly, stating "If voting made any difference, they wouldn't let us do it."

Like Emma Goldman, Parton isn't attributed, but she's quoted during the film's final act, when Jane takes leave of political campaigns and becomes an outreach coordinator for a grassroots association. "If you don't like the road you're on," she says, echoing Parton, "Start paving a new one."

Beyond the thinkers, writers, and historical figures directly referenced in Our Brand Is Crisis are a reserve arsenal of names dropped and cultural icons alluded to. Jane gifts Newman's Own steak sauce to a helpful volunteer named Eddie, and he doesn't recognize the actor's charming mug; a Bolivian folk band sings a German folk song; noteworthy political campaigns are referenced in abundance. So future Google searches of "women reading" should also yield Sandra Bullock's eyes peering out from behind a well-worn copy of Faust.