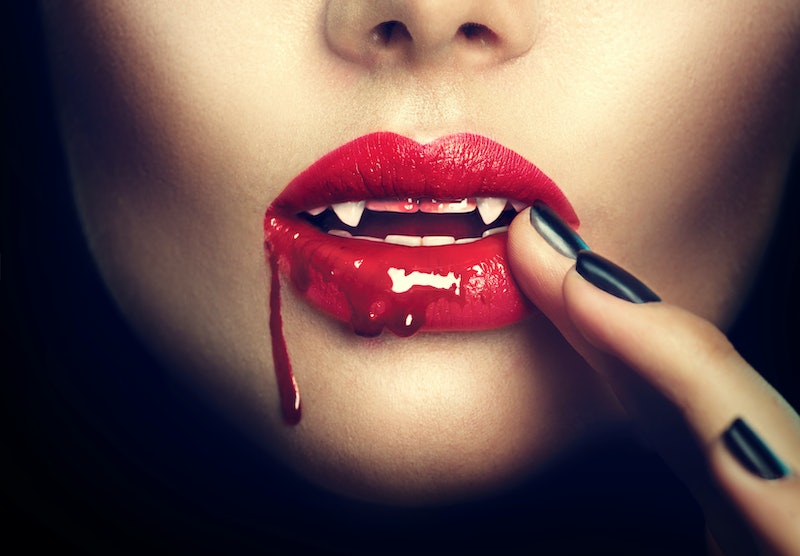 Guys, I am not trying to alarm you — but were you aware that at this very moment, as you are going about your normal day/ trying to figure out how to sneak out of work early to just a jump on your Halloween partying/ reading this on your phone while you poop, 5000 real-life vampires roam the streets of this fair country? OK, fine, I don't have any definitive proof that they're "roaming." They may also be sitting down. But regardless of their current level of physical activity, an organization called the Atlanta Vampire Alliance claims that 5000 people who "consume human and animal blood because they feel that they need it to survive" live among us.

But before you dismiss this with a thought like "There are 318.9 million people in the U.S.; you can probably find 5000 Americans to respond in the affirmative to literally any question, up to and including 'Are you Princess Bubblegum from Adventure Time?'" know that these modern bloodfeasters aren't insane — according to a Washington Post interview with John Edgar Browning, a postdoctoral fellow who studies American vampire communities, “After a short period of time, I realized that they weren’t crazy. At least, they weren’t any crazier than your Average Joe.” Browning says that his research led him to believe that self-identified real-life vampires are pretty normal people — just normal people who happen to also drink blood.

Curious about what the rest of the story is with real-world vampires? Read on for six real-life facts you can really sink your teeth into (sorry! I only have, like, 36 more hours this year when it's acceptable to make non-stop vampire puns, and I'm just really trying to ride this for all its worth).

1. There Are Probably A Few Vampires In Your Town

Browning found that people who identify as vampires defy a lot of stereotypes — they don't wear black capes or try to take Winona Ryder as their undead bride (or, again, not any more so than the rest of us). And according to his research, they don't all live in what you'd imagine to be vampire-heavy areas (i.e. New Orleans; Forks, Washington; inside that blood rave from Blade). Rather, most American cities are home to about 50 people who identify as vampires — and while they may be part of vampire-based communities called "vampire houses," they have regular jobs and maintain pretty typical American lifestyles outside of their blood drinking.

2. Modern Vampires Only Drink Blood From The Willing

American Horror Story: Hotel is a great resource for both Lady Gaga-based sex scenes and arguments against staying at non-chain hotels; however, it is not an accurate source for information about how modern-day vampires procure their blood. The vast majority of modern-day vampires are peaceful people who feel that drinking small amounts of blood from willing participants called "donors" helps sustain their energy and health. Some others eschew blood completely, and simply draw the psychic energy of others through touch. Even vampires who do drink blood — who refer to themselves as "sanguinarians" — don't subsist primarily on blood, though; they eat pasta and hoagies and jalapeno poppers, just like you. Oh yeah, they also don't have to avoid the sun, need sleep in coffins, grow fangs, or get to have sex with Matt Bomer (sorry).

3. Most Real-Life Vampires Figure It Out During Adolescence

So now that we've established that everything you know about vampires is wrong, and that modern vampires live in your town, aren't going to bite your neck in an alley, and don't just spend all night walking around in artfully distressed leather pants, you probably have a lot more questions — like, how the hell do you figure something like this out? According to Browning's research, most vampires realize that they want or need to drink blood in their teens — most of the people he interviewed reported going through a period of extremely low energy, then accidentally consuming some blood (say, after accidentally cutting their lip), feeling better, and deciding this meant that blood consumption helps sustain them.

Or Vlad the Impaler, or whatever else your gothest friend in middle school told you. The first vampire myths were found in ancient cultures in places like Greece and China, where stories about the dead coming back to life and harming the living circulated. Myths specifically about evil creatures who come back from the dead and kill the living were popularized in Eastern Europe from the 11th century onward, and the man often thought of as "the first vampire" lived in 18th century Serbia — his name was Petar Blagojevic (or Plogojowitz — the exact spelling of his name appears to have been lost to the sands of time).

In 1725, local news reports claimed that though Blagojevic was dead and buried, he rose from his grave at night and killed local villagers. An autopsy report on Blagojevic's body claimed "I did not detect the slightest odor that is otherwise characteristic of the dead, and the body…was completely fresh… Not without astonishment, I saw some fresh blood in his mouth.” These specifics are believed to have supplied many of the details of the vampire myths we know today.

But everything about vampires being suave, sexy, and prone to fine Victorian haberdashery comes from a short story called "The Vampyre," published in 1819 by John William Polidori. Prior to that, vampires were painted as kind of stinky, diseased ghouls. Am I turning you on yet, Twilight fans?

In 1732, an Austrian doctor rode out to the Serbian countryside with a small group of soldiers to investigate rumors that the undead prowled the area — and claimed to have witnessed one of these undead corpses scream and bleed after being stabbed with a stake. His report was the first to use the term "vampire," and the modern myth of the vampire got rolling from there.

Many people blamed outbreaks of contagious diseases on vampires in the 18th and 19th century, in both Europe and the U.S.— an outbreak of, say, tuberculosis or cholera was sometimes thought to mean a vampire was attacking a village. Why? Well, people who did not yet understand how germs or illness functioned would become panicked when a great number of villagers suddenly fell ill and died, one after another. Grasping for explanations, the survivors believed that the first victim had become a vampire, and had fed on the subsequent victims until they too died — an explanation that often supported by digging up the original victim and pointing to natural signs of physical decay (such as growth of hair and nails, or blood around the mouth) as signs that the victim was in fact undead and feeding on the still-living.

And early vampires weren't just impaled on stakes — other "precautionary measures" taken against a corpse suspected of being a vampire included decapitation, or cutting out their hearts and throwing them into a fire. In villages felt to be under vampire attack, the dead were sometimes buried with sickles placed inside their jaw, so that if they came back to life, they would decapitate themselves before they got too far. Classy and effective, right? Shockingly, recent historians who have uncovered these burials found that the sickles remained exactly where they were placed hundreds of years ago.

Of course, today's modern vampires don't feel like anyone "made" them become a vampire — they believe that they were simply born this way. But historically, the idea that vampires "make" new vampires by biting but not killing a human is pretty new. Centuries ago, people thought that you became a vampire from being born with a sinister mole or other "deformity" that meant you were in league with the Devil (or at least likely to eventually start hanging around him). It's not too different from the way that people identified witches during the witch trials in Europe, which, as I'm sure you all remember, was a very even-handed operation and ended totally well.

So there — now you have enough information about real vampires to converse with a real-life one, ruin a Tinder date, or potentially save Halloween. You're welcome!

More like this
Meet The Disney Imagineer Bringing 'Guardians Of The Galaxy' To Epcot
By Charlie Mock
4 Things To Do & 3 Things To Avoid This Gemini Season
By Brittany Beringer
Here's Your Daily Horoscope For May 19, 2022
By Mecca Woods
Rihanna & A$AP Rocky’s Astrological Compatibility Proves They'll Be Amazing Parents
By Nina Kahn
Get Even More From Bustle — Sign Up For The Newsletter