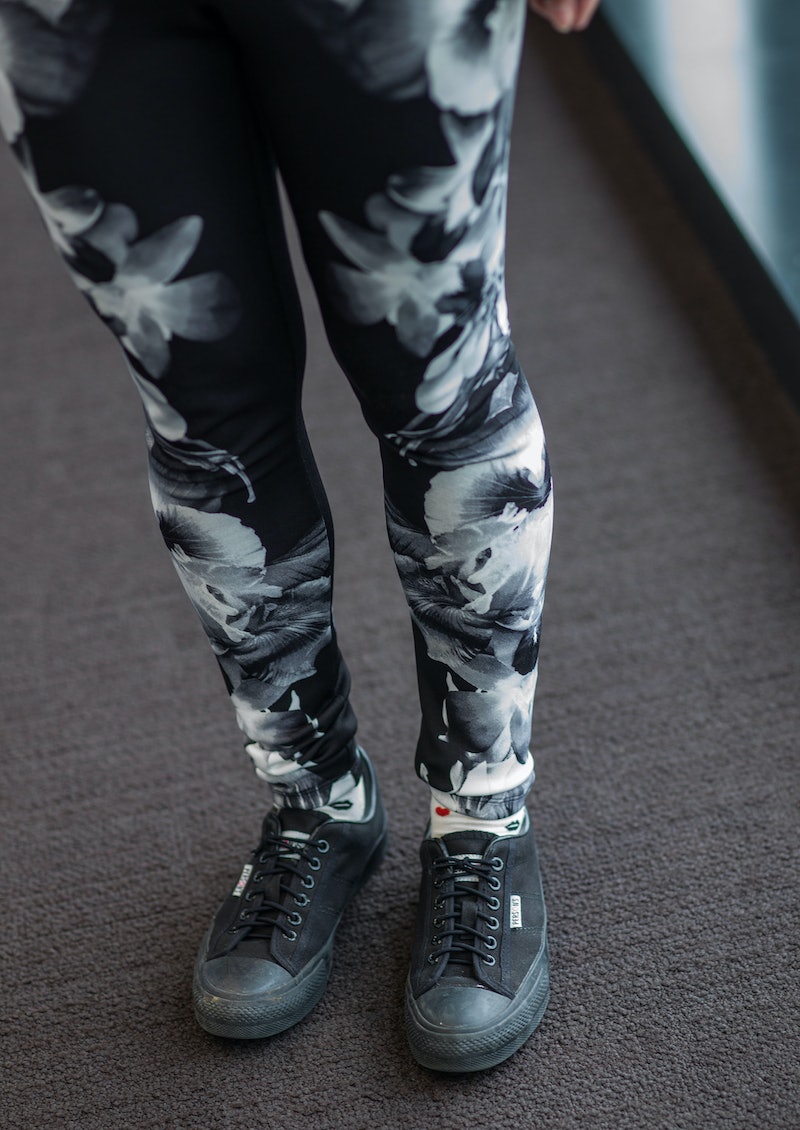 If there was ever a burning topic that we all absolutely needed a male take on, it's leggings — or at least, that's what Fox News seemed to believe when they asked a panel made up exclusively of men whether women should be able to wear leggings in public. What followed was predictably...pretty gross. And also pretty predictable.

It's clear from the outset that the Fox News segment wants the three fathers they've assembled to denounce the idea of leggings, based on the way that the host, Steve Doocy, initially frames the question as "Are you comfortable with the women in your life parading in public in leggings?" Unless these women are marching in an actual parade, I really don't see how wearing clothing out of the house counts as "parading."

To the fathers' credit, they don't all take the bait. Willy Robertson (of Duck Dynasty fame) explains that his daughters wear long shirts to "cover up the lady parts" and Andrew Sansone says that as his daughters are still in diapers, he'd just as soon not speculate. But Arthur Aidala says that his rule for his girls is, "If it's not worn in the monastery, it's not worn out on the street." Which I guess not only means no leggings, but that his daughters should be exercising in church clothes now. No running shoes or tee shirts for you, girls!

The segment then takes a turn for the worse, as several young women in leggings are brought out for the fathers to ogle on live national television. You can watch the whole uncomfortable segment here or below.

Asking men to be sole arbiters of women's clothing — or just about anything else to do with women's lives — is just plain ridiculous. Women are capable of making our own decisions, and believe it or not, we don't wear leggings to be sexual. We wear them because they're freaking comfortable. Seriously, you guys should try it. But sadly, this is not the first time an all-male panel has been asked to judge something to do with women without a single woman's input. In fact, despite the fact that all-male panels are incredibly statistically unlikely, they happen all the time. And sadly, many of the examples have way higher stakes than leggings.

Here are four all-male panels that never should have happened.

In 2012, Congress held hearings about the Obamacare birth control mandate, and seemed really only interested in hearing from an all-male line up. Not only did John Stewart make fun of the proceedings, but after the first all male panel, several Democrats walked out, asking "Where are the women?" A good question (and one we are apparently still asking).

According to the Washington Post, of the 150 events about Middle East policy presented by prominent Washington think tanks in 2014, not one included a single female speaker. Considering that the lack of rights and protections for women in many Middle Eastern countries is perhaps one of the greatest human rights issues in the region, that seems like a pretty heinous state of affairs.

3. All-Male Panel At the Global Summit Of Women

During the 2014 Global Summit on Women, Québécois commentator Marie-Andrée Paquet tweeted a photo with the caption, "Une image vaut mille mots, disent-ils" or "A picture is worth a thousand words." Because having a panel of six white, male CEOs talking about the need for gender equality in business, while not even sharing a stage with any women, sort of says it all.

That's right! This is far from the first time Fox has put a bunch of men together to talk about women, unburdened by the presence of any women who might speak for themselves. In 2013, a group of commenters lamented the rise of female breadwinners, a phenomenon which they seem to think goes against nature, and seem to be just generally confused as to which millennia they are living in.

More like this
Here’s How To Deal With Sexual Frustration If You Don’t Want Casual Sex
By Annakeara Stinson and Mackenzie Sylvester
10 Times Boris Johnson Got It Wrong On Trans Rights
By El Hunt and Sam Ramsden
Remember These Ancient Pieces Of '90s Tech?
By Lucia Peters and Emma Carey
Here's Your Daily Horoscope For May 24, 2022
By Mecca Woods
Get Even More From Bustle — Sign Up For The Newsletter