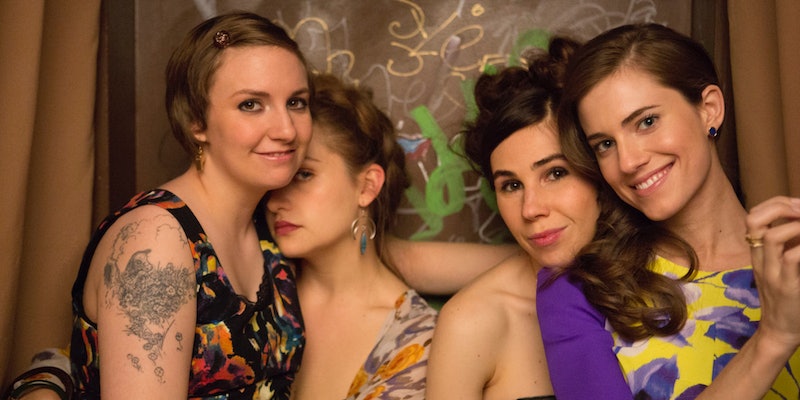 It's almost that time of year again. The time of year when we invite over our friends, set our DVRs, and throw back a few glasses of [insert alcholic beverage here] to get us in the mood for our favorite HBO offering. You know what I'm talking about, girls: Girls. A while ago, Bustle wrote about things to look forward to in season 3 of Girls and shared a couple of insights gathered from the trailers. Well now, we're closer than ever to the long-awaited premiere, which airs this Sunday, January 12th, on HBO with two back-to-back episodes.

Outside of the (usually) relatable plotlines and more outlandish episodes (*cough* Adam... ), the series is known for it's musical soundtrack. It practically launched Icona Pop into the musical sensation it is today. Though we got a few glimpses into the soundtrack for this season from the trailers, the songs haven't been released as they have in past years. But never fear! Here's our very own projected soundtrack based on everything from Hannah's budding success and Marnie's meltdown to Shosh's sudden promiscuity and Jessa's return.

Not About Love – Fiona Apple

Call It Fate, Call It Karma – The Strokes

Nothing Ever Changes – The Kooks

I Want it All - Arctic Monkeys

More like this
Kate Bush Revealed The Real Meaning Behind 'Running Up That Hill' Lyrics
By Darshita Goyal
Netflix Reveals First Look At Wednesday In The 'Addams Family' Spinoff Series
By Bustle Editors
Kenan & Kel Just Reunited At The 2022 Emmys & Twitter Is Overjoyed
By Grace Wehniainen
15 Offensive AF Jokes In 'Friends' That Really Aren't OK
By Tolly Wright, Bustle Editors and Meguire Hennes
Get Even More From Bustle — Sign Up For The Newsletter