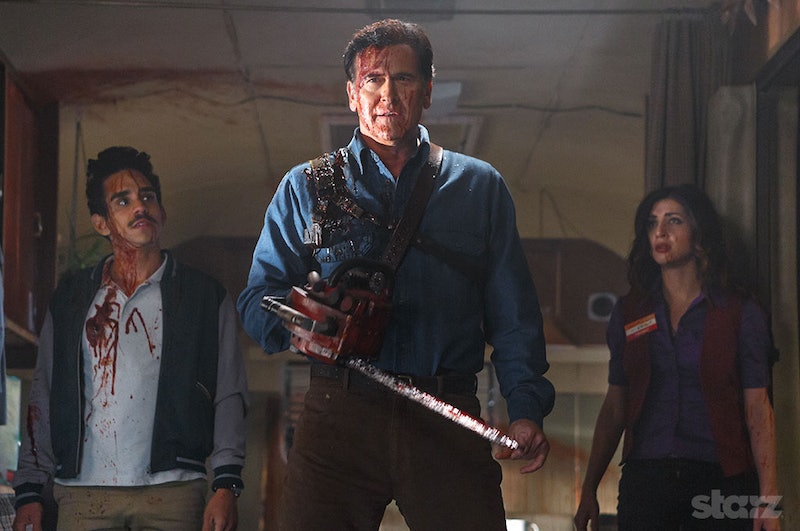 The Evil Dead films are all cult classics, but the series as a whole suffers from a bit of an identity crisis. The Evil Dead was straight horror, Evil Dead II mixed in some comedy, and Army of Darkness was primarily a comedy. Now the Starz series Ash vs Evil Dead brings it all together, re-creating a mix of comedic moments and genuinely frightening occurrences that made the original films so beloved. Ash vs Evil Dead falls closest to Evil Dead II, in that its horror is balanced out by dark comedy, but it's still set in a realistic present-day world — unlike Army of Darkness, which puts Ash in the middle ages (because why not?).

The TV series picks up 30 years after Ash Williams (Bruce Campbell, reprising his role from the original films) won his initial battles with the Evil Dead, which resulted in the death of his friends and the loss of his arm. Ash is still working in retail and spends his free-time hitting on women and going home to his trailer park abode. One day, the ever-flawed Ash tried to impress a prospective partner by reading to her from the Necronomicon Ex-Mortis — the book which caused the Evil Dead to rise in the first place — and unleashed the great evil back onto the world. However this time, the evil isn't secluded to a remote cabin in the woods. The Evil Dead are everywhere.

The show takes some narrative shortcuts to get the audience on board with the plot. Ash's new sidekick, co-worker Pablo played by Ray Santiago (In Time), seems pretty willing to accept not only that a great evil has taken the world hostage, but that the affable Ash is the hero the world needs. It's also a bit of a leap that a great evil has been resurrected after 30 years because Ash got high and decided to risk unleashing evil upon the world to impress a date, but Ash vs Evil Dead is more interested in getting to the fun of the show as quickly as possible. The clearest sign that the series is meant to be "fun" is the absurd amount of blood and gore the it throws onto the screen. It come across as downright cartoonish in tone, which is a lot of fun for horror fans, but makes it more difficult to take the show seriously when it is conveying more grounded, emotional moments.

There are a few times when Ash vs Evil Dead tries to tone down it's silliness, including when Amanda Fisher, played by Jill Marie Jones (Sleepy Hollow), is coping with having just seen her partner turned into a Deadite, or when Kelly Maxwell, played by Dana DeLorenzo, discovers her deceased mother is paying her living father a visit. These serious moments add weight to the proceedings, and give reason for the individual characters to pursue the Evil Dead instead of running from the hills, but they also slow down the madcap action that make up the show's strong points.

Ash vs Evil Dead is a show that wants to be a lot of things, and it does some of those things just well enough. Ash Williams is an entertaining and charming half-parody of modern male antiheroes, and it will be interesting to see if his laziness and womanizing is celebrated or demonized as the story progresses. But the show most succeeds when it tests the audience's willingness to accept and cheer for the absurdity of what is happening. That's why Ash vs Evil Dead is at its best when it features Ash fighting a box-cutter-wielding toy doll, or flying through the air to assemble his chainsaw-hand attachment.

In that sense, Ash vs Evil Dead is a perfect antithesis to other horror series like The Walking Dead, by showing that fighting evil monsters doesn't have to be gritty and dark. Sometimes, it can be silly, wacky, and the most fun you can have while covered in blood.