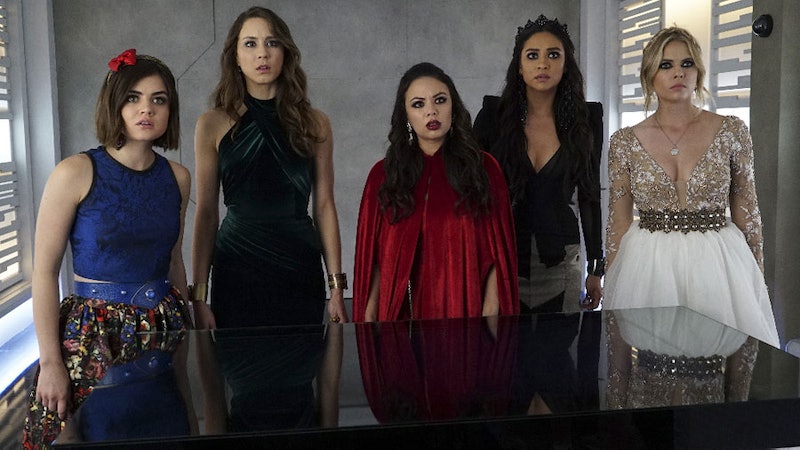 Say goodbye to the Pretty Little Liars that you know: Season 6B is bringing in an entirely different game, and this time, CeCe Drake won't be running it. The Season 6A finale of Pretty Little Liars revealed that Charlotte DiLaurentis, aka CeCe Drake, was the Big A that the girls were running from since Season 3. Now, CeCe is spending her days in a mental institution with way more credentials than Radley, and, five years later, the girls are running from a different villain — someone reportedly way more sinister than Cece ever was. According to showrunner I. Marlene King's interview with MTV News, Pretty Little Liars' new villain is motivated by the death of a yet-unknown character — and is seeking revenge. Could that be because the Liars killed someone during their five years away from Rosewood? If you ask me, the show could totally be including an homage to a twist from the book series it's based on.

(Warning: Spoilers for the Pretty Little Liars book series by Sara Shepard ahead.)

For those of you who haven't read the book series that came before the ABC Family show, things were almost more cray crazy for the Liars. In the book series, A is actually Alison, whom the Liars never were really friends with — they were friends with Ali's identical twin sister Courtney, who posed as Ali to get out of a mental hospital. Ali was a crazed killer who murdered her sister in an act of revenge, and then went after the Liars for being friends with the "other" Ali. This gets wrapped up in the eighth book, which is titled Wanted— but it doesn't end the mystery. In the ninth book, titled Twisted, the girls vacation in Jamaica where they see a girl who is eerily reminiscent of Ali. After an argument, the Liars push this girl off a cliff, where she falls to her death — and immediately after, they're tormented by A once again.

The television show doesn't follow the books very closely, but, from the sounds of things, it totally could be borrowing from this storyline for the new season. The biggest clue that the girls may have killed someone — or at the very least, are a catalyst for that person's death — has to do with the fact that A seems motivated by vengeance this time around. That wasn't the case for Charlotte's A game: Charlotte liked to toy with the girls in order to gain control over their lives, almost as if they were dolls. This A has much darker motivations.

The show's promos also seem to clue us into the fact that the Liars may have done something terrible during their time away from Rosewood. In the Season 6B promo, Caleb tells Spencer that she was "given an impossible choice," after which, Aria receives this text:

(Can we please talk about how much I am LOVING the new pop-up text messages they are doing this season?)

The girls have a new target on their backs, and this time around, they may be in even more trouble than when Charlotte was A. Could the girls have accidentally killed someone, like they did in the book series? Could a lie they told have cost someone their life?

Everything will be explored when Pretty Little Liars starts up again in January. No matter what the case, one things for certain: The girls really need to watch out this time around, because this A means business.