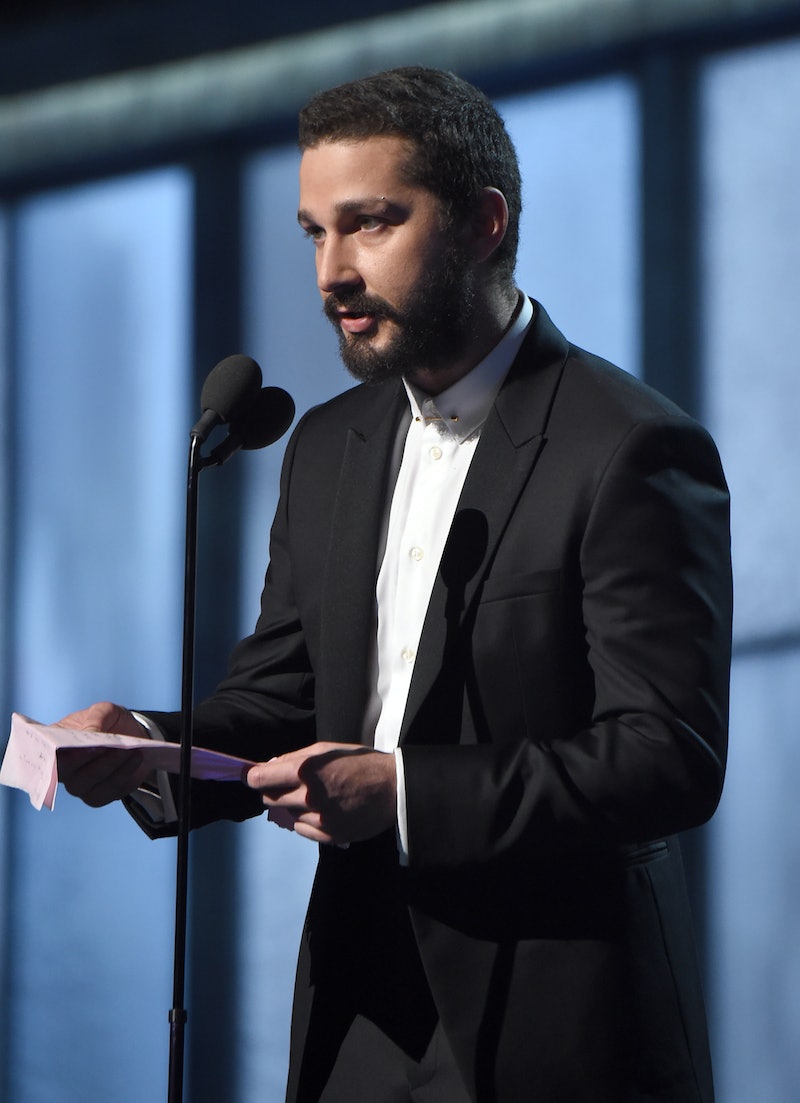 Shia LaBeouf has been in the news a lot lately for some pretty crazy things. He Twitter-battled Lena Dunham, plagiarized his short film, and then plagiarized his apology for said plagiarism. With all the negative LaBeouf news circulating, it's easy to turn him into the next Miranda Cosgrove or Nicolas Cage, both of whom are Internet jokes (for much less legitimate reasons, in my opinion). But LaBeouf isn't all LaBad. In fact, there's a lot you can learn from him.

Rupert Grint recently spoke of his The Necessary Death of Charlie Countryman costar's "method acting" in which Labeouf took actual LSD. "He smashed the place up, got naked and kept seeing this owl," said Grint. "If anything will make you not do drugs, it's watching that."

LaBeouf's intentional brush with acid was enough to put the former Harry Potter star off the hard stuff, and Grint's audience is vast (and full of young kids) which could mean that LaBeouf's taking one for the team may result in less LSD usage in kids. Or maybe not, but one can hope.

My high school teachers used to tell us not to plagiarize every year, but about half the kids in the classes never listened. They counted on teachers not having the time to check their made-up references, or to google chunks of their stolen text. But as anyone who has gone to college knows, plagiarism is a really big deal and will get you expelled.

Incidentally, LaBeouf did not go to college, so who knows! Maybe this is part of the problem. When the news broke that LaBeouf's short film had largely been plagiarized from Ghost World by Daniel Clowes, he said sorry on Twitter by stealing other people's apologies. So, as it's wont to do, the Internet jumped all over him. Even Lena Dunham got in on the action and I would just never want her mad at me. Hopefully this has taught people that if you plagiarize the Internet will write articles about your douchiness and no one wants that, right?

The viral video about actual cannibal Shia LaBeouf rightfully taught us to be afraid of cannibals, which is life knowledge everyone needs especially if bath salts ever make a comeback.

3. IF YOU MAKE CRAPPY SEQUELS ABOUT TRANSFORMERS YOU WILL MAKE ENOUGH MONEY TO WRITE IN THE SKY

Apologies if you liked Transformers 3, but props to LaBeouf for still being rich enough off franchise money to afford to write apologies in the sky. He posted this photo of an apology to Ghost World author Daniel Clowes:

Of course, the main lesson you should probably take from this is not to have to apologize via skywriting, and also that skywriting is frowned upon (Lena Dunham says so), but the other lesson you can learn is to milk what's working for all it's worth because when you can throw away money on cloud apologies, you've truly made it.

In any other scenario plagiarized apologies might be comical, but when you're trying to apologize for copying someone's work it's probably best to write your own words. But LaBeouf's plagiarized apologies weren't even sincere in themselves (gee, I'm so surprised) and he later revealed he was mocking everyone by stealing apologies. Nothing says sorry better than mocking, that's for sure. In a never-ending cycle LaBeouf apologized for apologizing poorly. He wrote on Twitter:

You have my apologies for offending you for thinking I was being serious instead of accurately realizing I was mocking you.— Shia LaBeouf (@thecampaignbook) December 31, 2013

But LaBeouf's struggles are our gains because we can learn from them. Ask yourself, "Have I apologized sincerely today? Have I stayed clear from cannibals? Did I avoid drugs?" If the answer to those questions is "yes" then congratulations, you've learned from LaBeouf the best lesson: don't be 2013 Labeouf.

Fortunately not even LaBeouf has so be his 2013 self anymore. 2014 brings a new year and a chance for him to learn from his mistakes as we have. Here's to LaBeouf figuring things out and having less people to apologize to in 2014.