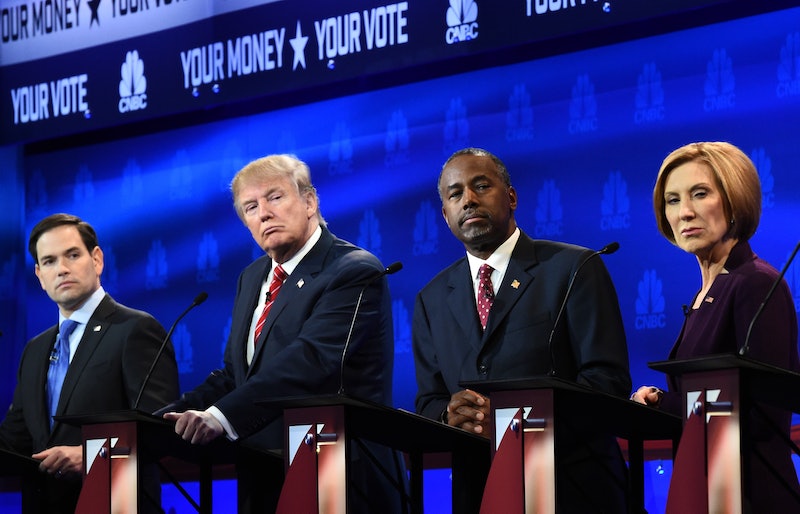 Wednesday evening's GOP primary debate focused on the U.S. economy, and the presidential hopefuls discussed a variety of issues, from social security to a flat tax rate, over the course of the evening. There was one issue, though, that got surprisingly little attention from the Republican candidates — and no, we're not talking about women's rights. The GOP candidates barely talked about the minimum wage during the debate, which is surprising, since they all displayed such passion about reforming the economy. Increasing the United States' federal minimum wage is also a point on which many Republicans and Democrats disagree on. With Obama's efforts to increase the federal minimum wage, you'd think they would have used it as fodder for CNBC's debate.

The one brief minimum wage shoutout came from former Hewlett-Packard CEO Carly Fiorina. When asked about a 401(k) program for businesses, Fiorina responded that the incentive could be a great idea, but the government doesn't necessarily need to be involved. That allowed her to segue into her next point, that "there is no constitutional role for the federal government to be setting minimum wages." Even if that's true, plenty of plenty, including those employed by the federal government, do rely on the minimum wage.

It would have been interesting to hear candidates talk about their positions on minimum wage (or other issues that speak to a broader audience) rather than making personal digs at one another during the debate. But who knows, maybe minimum wage will be on the topic discussion list at the next Republican debate. Maybe.