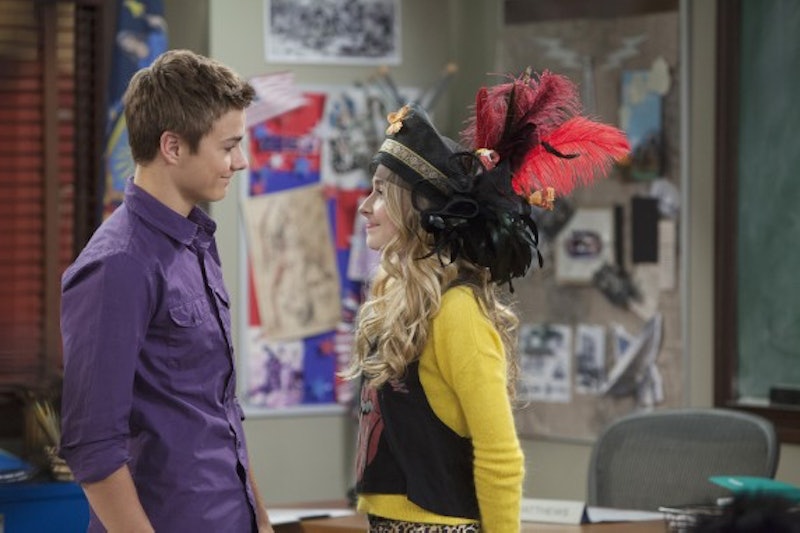 Girl Meets World is one of the few shows on the Disney Channel that both adults and children can enjoy. Not that there aren't multiple ones, honestly, but because Girl Meets World is the only one that features characters from a television show that might be considered "before this generation's time." The sequel series to Boy Meets World is growing with its characters, and it's one of the most emotionally nuanced shows that the Disney Channel has right now. One such emotional nuance is the love triangle that has developed between best friends Riley Matthews, Maya Hart, and Texas boy Lucas Friar. And I am here to be the one to stand up and say that Girl Meets World should make Lucas and Maya a couple.

Season 1 of the show built Lucas up as being Riley's Topanga, her first crush and eventual one true love that she would spend the series developing a relationship with just like her parents, Cory Matthews and Topanga Lawrence, did in the prequel series. However, Lucas had just as much chemistry with Maya as he did with Riley, and, in Season 2, Riley eventually discovered that not only did Maya have feelings for Lucas, but that she was also burying them because Riley was more important to her than any boy. Because Riley felt the same way about Maya, she broke her own heart by stepping back to give Maya and Lucas a chance to be together.

It's an emotional gut-punch that's hard to watch, but I think that Lucas and Maya should be the endgame couple of the show, and here are 23 reasons why.

1. They're Not Your Typical Bickering Couple

Maya doesn't just pick on a defenseless Lucas, and their fights are never really fights. They are actually bantering with each other, with even Lucas acknowledging that he's the only one who can "handle" Maya. The one time Lucas called Maya a name that genuinely hurt her, it hurt her because Riley took his side not because she thought Lucas was wrong to return her name-calling. The mutual respect is what makes them great.

Riley is the most important thing to Maya. Maya is the most important thing to Riley. They're aware that they like the same guy right now, and they are still determined that their friendship come before anything with Lucas. It's not breaking girl code if your girl is practically shoving you at the boy, and it's just proof that, one day, Riley will be OK with Maya and Lucas dating, even if she's not right now.

3. She Brings Out The Fun In Him

Lucas was kind of a generic good boy and voice of reason before Maya started bantering with him. Suddenly, he displayed a mischievous sense of humor. Suddenly, he smirked. Suddenly, he had a quip ready for her every snide remark. Suddenly, he had more depth than just being "the good guy from the train that Riley has a crush on." And his character development only snowballed from there.

4. He Brings Out The Best In Her

5. They Work Really Well Together

They finish each other's snide remarks. Need I say more?

6. He Puts A Lot Of Thought Into Their Little Game

Lucas may have been dancing with Riley at homecoming, but not only was he dressed as the cowboy Maya always mocks him for being, but he was also hiding a rose in his hat for Maya the whole time. And this was just in Season 1.

7. She's Met Most Of His Family

When Maya and Lucas had to do a project together, Maya spent the whole day at his house with his mother. Then, when Maya, Riley, and Farkle went with Lucas and Zay back to Texas, she got to meet the rest of his relatives, his father excluded. And Lucas is already quite familiar with her mother. They've already gotten the meet the parents out of the way.

How did he even know where her house was?

9. She Gives Him All These Pet Names

And Bucky McBoingBoing and Sundance and Huckleberry. And he lets her.

Still waiting on Lucas to tell us why he lets the short stack of pancakes call him all these names, tbh.

11. But She Does Know His Name

Because she likes him very much. And we know that now.

12. She Writes Songs About Him

Any time Sabrina Carpenter gets to show off her singing skills on the show is a plus, but when she gets to show them off because Maya is singing a song about Lucas? I will go down with this 'ship.

On the harmonica, guys. She's making fun of him, and he's playing the harmonica to help her out. I can't with these two.

14. They Compliment Each Other Well

Lucas and Maya are a curious blend of opposites and similarities. We know that Lucas got expelled from his old school for fighting and his inability to control his temper, and that he tries very hard to be good but doesn't always manage. We know that Maya prides herself on being trouble, while also being insecure about how often she breaks things, and needs Riley to keep her on the straight and narrow. Maya lets Lucas know that you can get in trouble and still be a good person, and Lucas lets Maya know that there's a line that she should avoid crossing unless she wants to end up like he used to be. The way they compliment each other brings out the best in both of them.

I'm sorry, but it's just cute.

Nevermind the fact that they got voted Best Couple in the yearbook because the whole class thinks they're "like fi-yah."

18. But Also Stops Him From Making Mistakes

However, she also knows that Texas Lucas isn't all that Lucas is. When he was about to beat up a bully and get himself in trouble at his new school where he came to make a fresh start, Maya literally jumped on his back to stop him. He had tried to stop her from doing that same thing earlier, and she knew he didn't want to be that guy anymore. She might like that guy, but she also likes the guy Lucas is now.

There's no context that would explain this.

And, at the end of the day, that's what's most important. Maya and Lucas are actually friends. They spent time together even when Riley, Farkle, and Zay aren't there. They talk about real things, they trust each other, and they support each other. Maya might like to take Lucas down a few notches, but she also keeps him in check and never wants to see him get hurt. In return, Lucas fights for her and her interest in art. The greatest part of their relationship is that it has a strong foundation of friendship behind it, and no love triangle can change that.

Please, please, please, Girl Meets World, give Maya and Lucas a chance. They might not be right for each other right now, not with so many feelings still lingering between Lucas and Riley, but Maya has spent too long being someone's second choice, or the girl that wants the guy who doesn't want her back. (Looking at you, Josh.) She and Lucas have real potential to succeed as a couple, and I'd love to see it happen.