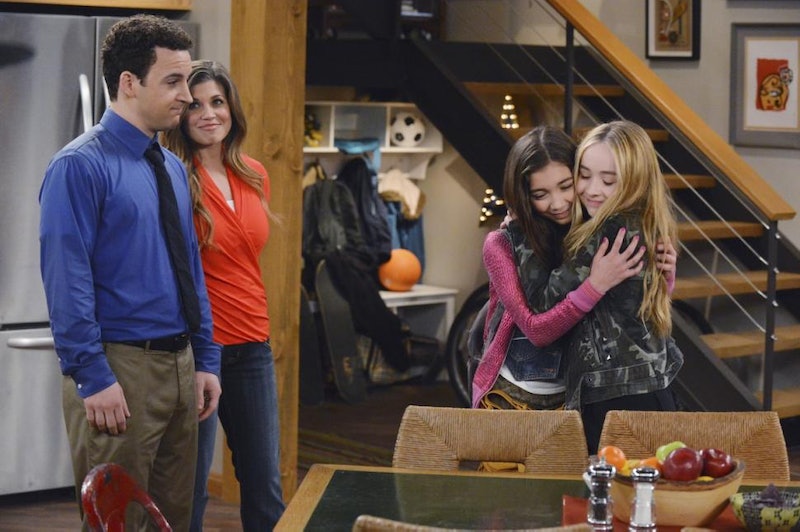 In Season 1, there was a fluffy, modern Disney feel to most of what Girl Meets World was doing. The show was glossy and the stories were simplistic (albeit always entertaining). There was nothing wrong with that version of the show. Thanks to the Boy Meets World nostalgia and its talented young cast, Girl Meets World was a fun diversion no matter what your age. That was then; now Girl Meets World is growing up right before my eyes and in the process turning into a show worthy of carrying on Boy Meets World's legacy.

Recent episodes have emphasized that the core group — Riley, Maya, Lucas, Zay and Farkle — are getting older. Where once entire episodes could be built around Farkle's fear of gym class or the politics of a class election, the gang's problems go much deeper than they did at first. Cyber bullying, autism, and the heartbreak that comes when crushes get complicated have all been tackled with maturity and grace by the show. Girl Meets World isn't always funny these days; sometimes it refrains from going for the laugh. It is still very much a show aimed at tweens, but it is one that is refusing to be frozen in time. On Twitter, the writers themselves have declared the "simple stories" are over.

It's easy to forget that Boy Meets World went through a similar evolution. Before Shawn lost his father, before Topanga (temporarily) moved away, and before the cult episode, Cory confused puberty with lycanthropy and struggled with breaking family traditions — something Riley also dealt with. Now it is Riley and Maya's turn to face the trials of high school and an uncertain future full of feelings, heartbreak, and challenges to the safe status quo that supported them throughout junior high school.

Most modern Disney shows leave their characters in stasis until the show ends. Their lives reset at the end of each half hour and even as they age physically, they remain childlike in the lovable way of a classic sitcom character. Real kids don't work that way, though. They grow in maturity as their lives become more complex. Where Disney has seemed content in letting audiences age out of their programming, knowing another group of youngsters will be right behind them, Girl Meets World is prepared to keep its audience by not shying away from issues, social or personal.

To fully understand why this is so important you have to look no further than star Rowan Blanchard. The actress is 14, just like her character, and she is already more engaged in feminism, intersectionality, and the importance of kindness than most adults. I doubt a young woman as smart as Blanchard wants to be talked down to, and neither does the audience that watches her and the rest of the cast.

There's not a lot of programming aimed at junior high aged kids that actually stars young actors and focuses in on issues specific to them. I know when I was younger, Boy Meets World was a port in the storm that was my early teen years. It wasn't too edgy, but it dealt with actual issues I encountered: bullying, the desire to fit in, the ups and downs of friendship. I have no idea where I would be without Topanga and the eloquent way she dispensed feminist ideals.

I know many fans are currently distraught over the Maya, Riley, and Lucas triangle, but this story is just a natural part of growing up. The pain of crushing on the same boy, the confusion, and the heartache of facing change are all relevant to the young audience and bittersweet to the older fans. Girl Meets World wants you to forget all the Disney hangups you have, and embrace the series for what it is: a coming of age tale.

Riley, Maya, Lucas, and Farkle are all being allowed to grow up. Their lives won't reset back to simpler times. This truly is their world now, and I cannot wait to see what kind of adults these amazing kids turn out to be. If Boy Meets World is any indication, the show will stick around long enough for me to see that happen. I have a feeling that as emotional as the journey will be for me, the young adults in the audience are in for something even more special — a show they can grow up with.