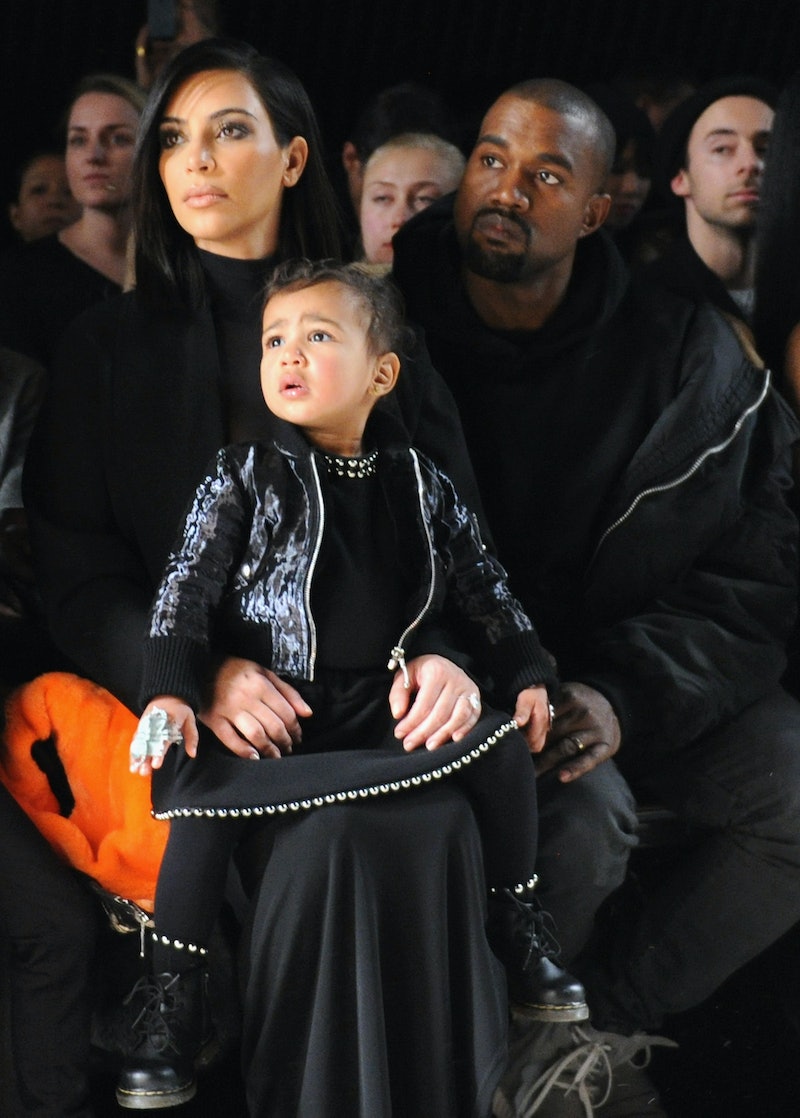 When it comes to being chased by the paparazzi, the Kardashian family knows a thing or two. Unfortunately, since the Keeping Up With the Kardashians stars are famous and constantly being photographed that means so are their kids. For example, on Wednesday, a video surfaced of Kim Kardashian and Kanye West's daughter North West shutting down the paparazzi on her way to ballet class with a woman who I assume is her nanny. A group of photogs were waiting for her like a pack of wolves on the hunt, because they clearly couldn't wait to get a picture of a 2-year-old. Clearly taking cues from her parents, North said to the paparazzi, "I said no pictures," in the sweetest voice ever.

After watching the video for the first time, there's a good chance you might think, "Oh my gosh, that is the cutest thing." Yes, it is adorable, because North is stinking cute in her ballet gear. However, let it all sink in for a moment. As cute as it might be, her paparazzi encounter is extremely sad. Shouldn't there be a line drawn somewhere when it comes to photographers camping out to take pictures of a child, especially if that child's parents aren't even with her?

The video is included below to not so others can gawk over North, but to show just how many paparazzi were there and how intense the situation was:

North probably doesn't understand what's happening and why all these people are flashing cameras in her face, but she is probably used it because of who her parents are. She also doesn't seem to be that phased by the situation or scared, like most children would be. It's kind of disturbing. However, when you are growing up with Kim Kardashian and Kanye West as your parents, paparazzi being everywhere you turn becomes the norm — and unfortunately at such a young age.

So, where is the line drawn? This moment might not have garnered as much attention if either of North's parents were present, because then, one could assume, that the photographers were there for Kardashian or West, rather than a toddler. Obviously, there is a huge difference when it comes to snapping a child's photo without her parents versus taking photos with her A-list celebrity mom and dad there. But does that make it OK? If anything, seeing how much the paparazzi want to get photos of North by herself, makes it clear that when we do see her snapped with her parents, mom and dad aren't the only targets.

Even though North spoke up and said something to the paps, she is still a little girl who can't defend herself. Where are the boundaries when it comes to the paparazzi and children? They aren't taking photos out of the goodness of their hearts, but to sell and make money.

Thankfully, there are some famous faces stepping up to protect their own and other celebrities' children from paparazzi. In March 2014, Kristen Bell and Dax Shepard started the #NoKidsPolicy campaign in hopes that media would stop publishing unsolicited photos of celebs' children. While chatting with Bustle in August 2014, Bell said, "They’re [kids] too little for all this judgment. They don’t understand any of it, they don’t understand that they’re a cog in the machine. All they feel is a predatory sense of oppression when the paparazzi follow them, and that’s intolerable."

Several celebrity parents, like Jennifer Garner and Halle Berry backed the actress in changing the California paparazzi law. Even many entertainment outlets, including People, Us Weekly, and Entertainment Tonight, got on board with Bell and Shepard. Fortunately, in 2013, California Gov. Jerry Brown signed the Paparazzi Harassment Deterrent Bill. The bill increased penalties for paparazzi harassment by making it a misdemeanor to try to photograph or video a child in a harassing way, if the image is being taken because the parent of the child is a celebrity or a public official. Such penalties include up to one year in jail a fine of $1,000. Obviously, North is proof there is still a long way to go in protecting children from paparazzi.

This moment definitely speaks volumes and something needs to change, because making a child the target of a paparazzi infestation isn't OK.