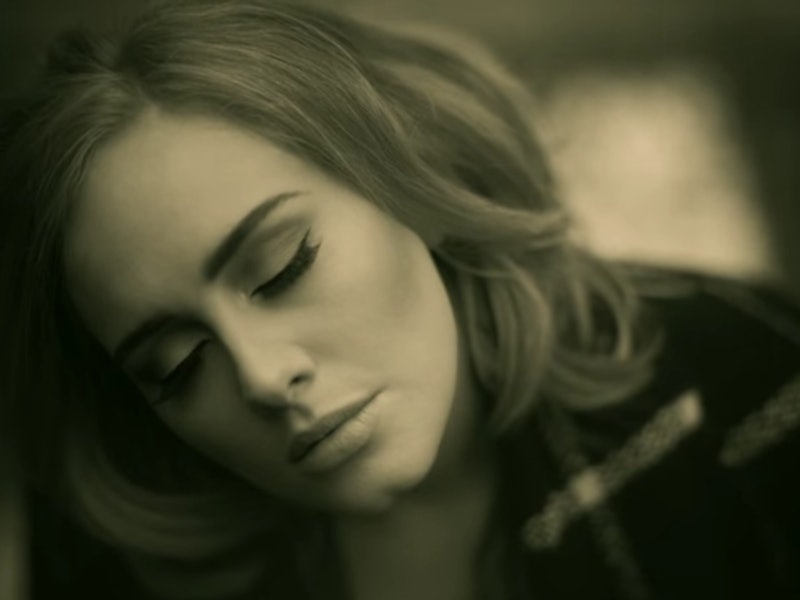 We've had almost a week to get over — or at least begin to process — Adele's return to the music world with her beautiful new song, "Hello". By now, we've all sang at the top of our lungs as it played on repeat, cried our eyes out while racking up the YouTube Hits, and basically just let our hearts break over and over in the best possible way. It's been a nice warm up prior to the release of her first new album in four years, that's for sure. With the release of Adele's 25 only about three weeks away, we're getting inevitably closer to one of the best albums any of us will have heard in a long, long time. We need to be ready for it, and I don't think we are just yet.

There are, of course, some things in life that you just can't prepare for when it comes to the potential emotional impact. Adele is one of those singers with the power to absolutely destroy us, and even though we know it's coming and we kind of expect it, it still ends up taking us by surprise and bowling us over. This is a gift, and we don't want to squander it. Before 25 is released, get yourself ready as best you can. Need help? Don't mind if I do.

Stock Up On Tissues

We know Adele is going to make us cry, which means we're going to get that gross snotty nose thing that happens, so why would we want to be without tissues? We wouldn't, so hit up a double pack and maybe get the fancy ones with aloe to save your nose.

Remember that SNL sketch with the women listening to "Someone Like You" and sobbing over a carton of ice cream? It's hilarious because it's cliche, but it's also a wonderful (and delicious) plan. If you're going to give yourself space to really feel the album, you've gotta have snacks on hand.

Adele's new interview with i-D is great because she talks about everything you can think of: the album, growing up, motherhood, her inspirations, etc. If you love her, you'll definitely want to read it.

Her first two albums are nothing like 25 will be, but they were a great picture of Adele when she was younger and figuring things out, and they're still really, really good. While you're going through withdrawal waiting for 25, just pop on one or both of her previous albums and let her sweet voice soothe you, or at least temporarily distract you from the fact that it's not November 20 yet.

If you follow Adele, you've probably been incredibly amused by the fact that she sings like an angel but then curses like a sailor, with an accent that's straight out of The Only Way Is Essex (she was actually born in Tottenham and then moved to Brixton and South London when she was a pre-teen). It's amazing, and it's something you should definitely practice, even though you'll probably sound like a fool... not that I've tried.

Buy A Journal & Start Using It

For Adele, writing songs is her way of processing her experiences and moving past them. For those of us who aren't so musically gifted, we can still get the same results by getting a journal and writing about our feelings that way. No one else ever has to read it (and probably shouldn't) and you can get that same catharsis you feel when listening to "Hello".

Practice Singing "Hello" To Your Dog

Dogs don't care if you're a terrible singer, so grab your hairbrush and let your off-tune voice float through the air and into your pet's face. They may not appreciate it, but you'll feel better.

Pop On Some Amy Winehouse

In her interview with i-D, Adele basically credited her entire career to Amy Winehouse, whose debut album Frank inspired her to pursue singing in the first place. If you love Adele and great singers in general, you're likely already a fan of Winehouse, but it doesn't hurt to revisit her amazing catalog, as well.

Check Out eBay For A Cheap Flip Phone

They're coming back, didn't you know?

Pre-Order '25' On iTunes Or Amazon

You should have done this already, really, but if you're a busy lady or gent with too much on your plate, maybe you haven't yet had a chance to pre-order 25 on iTunes or Amazon. Go on, I'll wait.

Use A Sepia Filter On All Your Instagram Pics

These things won't make the time until November 20 go faster, but they'll at least distract you for a little while until it's just a bit closer, and that's really all we can ask for.