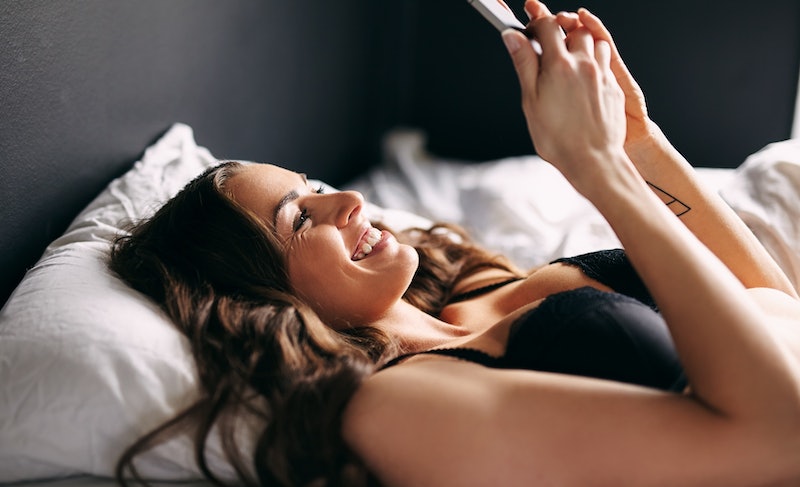 In a new study published in the journal Cyberpsychology, Behavior, and Social Networking, researchers examined the link between married couples’ sexting behavior and relationship satisfaction. Because yes, married people do sext. But it goes beyond your typical, “Send me a nude pic.”

Sexting has become a norm in modern-day romances. As an American Psychological Association study from September of this year found, it’s becoming increasingly popular. So popular, in fact, that 87 percent of adults admit to have sexted in their lifetime, and about 82 percent saying that they’ve done it over the past year. An Adam and Eve survey even found that 56 percent of those who sext say they do believe that sexting has improved their relationships.

The new study was carried out by Brandon T. McDaniel from The Pennsylvania State University, College Park, and Michelle Drouin from Indiana University-Purdue University Fort Wayne. In order to conduct their research, McDaniel and Drouin took a sample of married or cohabiting couples (180 wives and 175 husbands), who on average, were around 30-years-old. Participants were then asked to complete an online survey, which measured them on their sexting habits, relationship satisfaction, relationship ambivalence, and attachment in romantic relationships among others.

“Older individuals are less impulsive and less prone to risk taking than their younger counterparts and therefore more carefully evaluate the risks of their sexual images being catapulted into cyberspace (or found on their phone by others)" researchers wrote in the study. "As the average age of the participants in this study was about 10 years older than the average age of the young adults in undergraduate sexting research, it is probable that some of these older adults established their sexual relationships with their partners without the use of technology and therefore bypassed the sexting trend.”

Here’s a little breakdown of the study's findings:

It’s a lot less common than those in young adult relationships.

2. Married People Use Their Words

As far as content goes, 29 percent of married people report to engaging in “sexy talk” with their partners. Only 12 percent admit to sending sexually explicit pictures or videos.

According to researchers, sending intimate messages were positively correlated with relationship satisfaction among people with high levels of avoidance.

4. What Works For One, Doesn't Work For The Other

Sending naughty pics only related to satisfaction for men in the study. For women, however, it led to high levels of attachment anxiety. Plus, sending dirty pictures was found to be related to greater ambivalence between both men and women.

More like this
Here’s How To Reignite The Spark In A Sexless Relationship
By Vanessa Marin
I'm 42 & I've Never Had Sex. Is It Too Late?
By Sophia Benoit
Here’s How To Deal With Sexual Frustration If You Don’t Want Casual Sex
By Annakeara Stinson and Mackenzie Sylvester
Are Gemini & Cancer Compatible In A Relationship?
By Kristine Fellizar
Get Even More From Bustle — Sign Up For The Newsletter