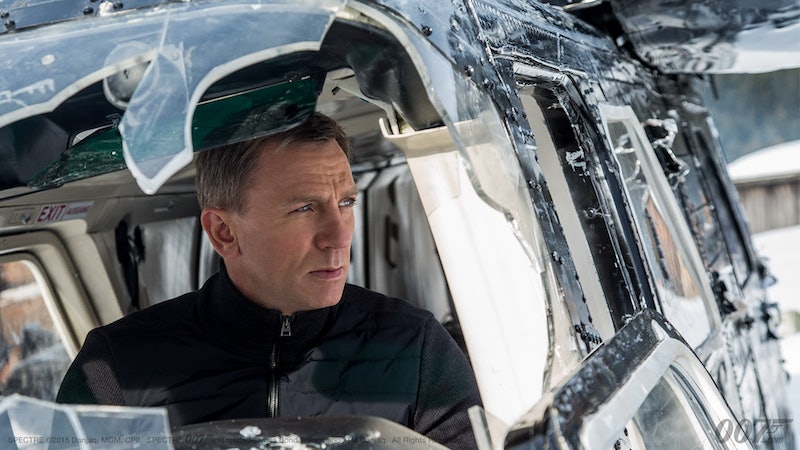 The 24th James Bond film, Spectre, is due out on Nov. 6, and it's sure to be a monster hit. The last Bond movie, 2012's Skyfall , was the highest-grossing film in the franchise (the first to take in a billion dollars at the box office), and is also one of the series' most-praised critically, with a 95 percent rating on Rotten Tomatoes. So you know the follow-up is going to be something spectacular, seeing as it's forced to follow such a success. But what if you didn't see Skyfall, or any other of the 22 other Bond films, and yet you still don't want to miss out on the spectacle that Spectre promises? Well, don't worry, because I've got everything to know about James Bond before Spectre gets released right here, and I promise it'll get you up to speed.

The most obvious thing you should know right off the bat is that Spectre takes place shortly after the events of Skyfall. This may seem obvious to noobs, but Bond films haven't always followed such a strict timeline. When your film franchise spans six decades, chances are you're going to run into some issues with continuity. But the Craig Bond movies, of which Spectre will be the fourth, have more or less followed a continuous story, which seems to be coming to a head in Spectre. Here's what else you should know going in.

MI6 Is In Trouble

You probably knew Bond was a British secret agent, but you may not have known that the agency he works for is called MI6, which is a real life British intelligence agency. In Skyfall, MI6 was bombed by Raoul Silva, that film's antagonist, and Spectre deals with the continued fallout from that event, leading Bond to discover a previously unknown organization at the heart of it all: SPECTRE.

SPECTRE Has Been Around For Awhile

Bond discovers that the evil organization known as SPECTRE has apparently been behind all of the troubles that have plagued him since Casino Royale, as the return of Mr. White (a villain from Craig's first two films) indicates. But SPECTRE goes back a lot further than that. The organization made its debut in the first Bond film, 1962's Dr. No, and continued as the series' main antagonistic presence until 1971's Diamonds Are Forever. During this time, they were led by the villainous Blofeld, who should appear familiar to fans of Austin Powers since the character of Dr. Evil was based on him. After initial rumors of a Blofeld return, this new version of SPECTRE is apparently led by Franz Oberhauser (Christoph Waltz). Spectre marks the return of SPECTRE to Bond after over 40 years, so expect hardcore fans to be gushing over some references to the olden days, like Oberhauser's affinity for Nehru jackets.

Don't Get Attached To The Bond Girls

James Bond typically has two or three lovers per film, normally referred to as Bond girls. They're often tragic characters, and at least one is all but guaranteed to be killed in the film (though one also traditionally survives until the end to be romantically linked to Bond before disappearing prior to the next film). Craig's films have eased up on Bond's womanizing compared to the earlier movies, but he may be up to his old ways with three women to contend with in Spectre: Léa Seydoux, Stephanie Sigman, and Monica Bellucc, the latter of whom is now the oldest Bond girl ever at 50.

The Supporting Cast Is Massive

Bond has a supoprt team at MI6 that appears in nearly every film in the franchise, and Spectre is no exception. Ralph Fiennes is M, the head of MI6 and Bond's boss. He took over the role at the end of Skyfall, when Judi Dench's M was killed. Q, played by Ben Whishaw, is the head of research and development at MI6, and he supplies Bond with his gadgets. The character was reintroduced in Skyfall following a two film absence, appearing now as a young technical wizard instead of an old professional. Finally, there's Moneypenny, played by Naomie Harris. Moneypenny is M's secretary, and she has a very flirtatious but strictly platonic relationship with Bond. She, too was rebooted in Skyfall, having missed the two previous films, and now has a more badass background as an ex-field agent.

There's Always A Giant Music Video At The Beginning

If you show up to the theater and there's a long, trippy credits sequence playing on the screen with Sam Smith singing, you didn't miss the movie. Bond movies generally begin with a short scene that's loosely connected to the rest of the film (usually an action scene, sometimes a love scene that evolves into an action scene), followed by a super-long credits sequence backed by the movie's theme song. Every Bond movie has its own "Bond song," and they're kind of a big deal. Adele handled Skyfall's opening credits song, seen above, and Sam Smith takes over the duties this year with his song, "Writing's on the Wall."

There are a number of things that James Bond almost always does. He introduces himself by saying, "Bond... James Bond." He drinks martinis shaken, not stirred. He drives an Aston Martin. He uses a Walther PPK gun. He likes wearing suits. And he has a license to kill that he uses way more than anyone should. Expect most, if not all of these character traits, to appear in Spectre.

After consuming this James Bond knowledge, you are now ready to enjoy Spectre without having previously seen any Bond movies. You still should see them, of course, because they're awesome... so awesome.