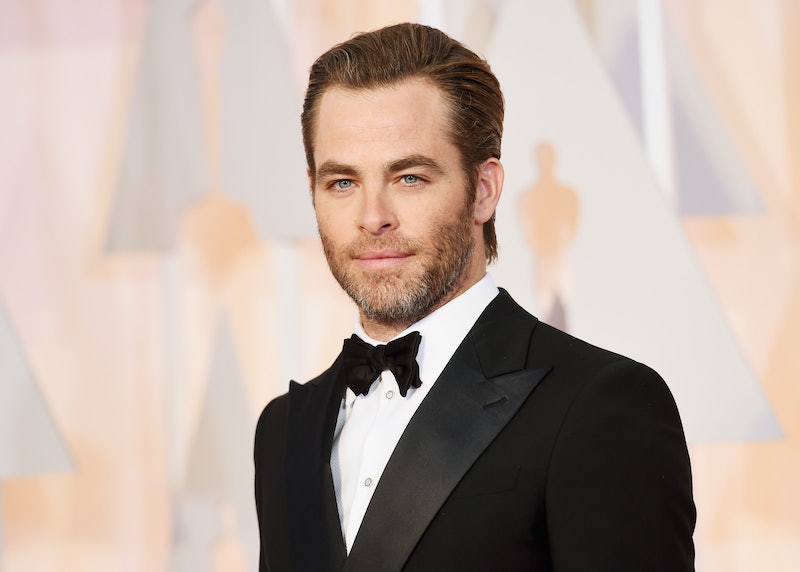 What's not to love about Chris Pine? Since he first swept Anne Hathaway off her feet in The Princess Diaries 2: Royal Engagement, he's had everyone hooked, and this is what made him perfect for the role of Prince Charming in Into The Woods. Whether acting in comedy, action, science fiction, or romance, Pine is always on form, so news that Chris Pine will be in the Wonder Woman movie is totally exciting, as are the interviews he's been giving about it. Speaking with French publication Premiere, Pine says, "What excites me most is to work in a movie with a female superhero. With a woman in the lead role. I'm teamed with this intelligent, beautiful and strong woman, to destroy evil and save humanity."

Considering the backlash Wonder Woman has already received, which seems to be purely misogynistic and based on the fact that it's a superhero film with a woman in the lead role, Pine's interview is totally refreshing and kick-ass. Wonder Woman, played by the awesome Gal Gadot, will appear in Batman v Superman: Dawn of Justice , due March 2016. This will be followed by her own solo movie in 2017, marking the first time Wonder Woman has had her own film. Patty Jenkins will direct, following an important quest by Warner Bros. to hire a female director.

It's so important that Chris Pine is being outspoken about the need for more female superheroes, and movies helmed by women. There has been a growing backlash in response to the number of superhero movies currently being released, but the fact that so few feature female characters, let alone leads, is evidence of a growing problem in Hollywood.

If an actor as successful as Pine is comfortable playing opposite a female superhero, and taking a backseat to that character's storyline, then perhaps Hollywood will follow suit. It shouldn't feel so revolutionary to hear an actor speak so positively about a movie headed up by women, but, since we still live in a time where it's not unusual to hear actors in other superhero movies disparaging female characters in their respective franchises, it's exciting to feel like progress might finally being made.

Big love to Chris Pine for this interview, and for what a totally inspiring stance he's taken on feminism and superhero movies. We didn't need any more reasons to check out Wonder Woman, since she is enough of a draw, but that all involved truly support and understand what the film is about and why it's so necessary is just the icing on top of an already delicious cake.