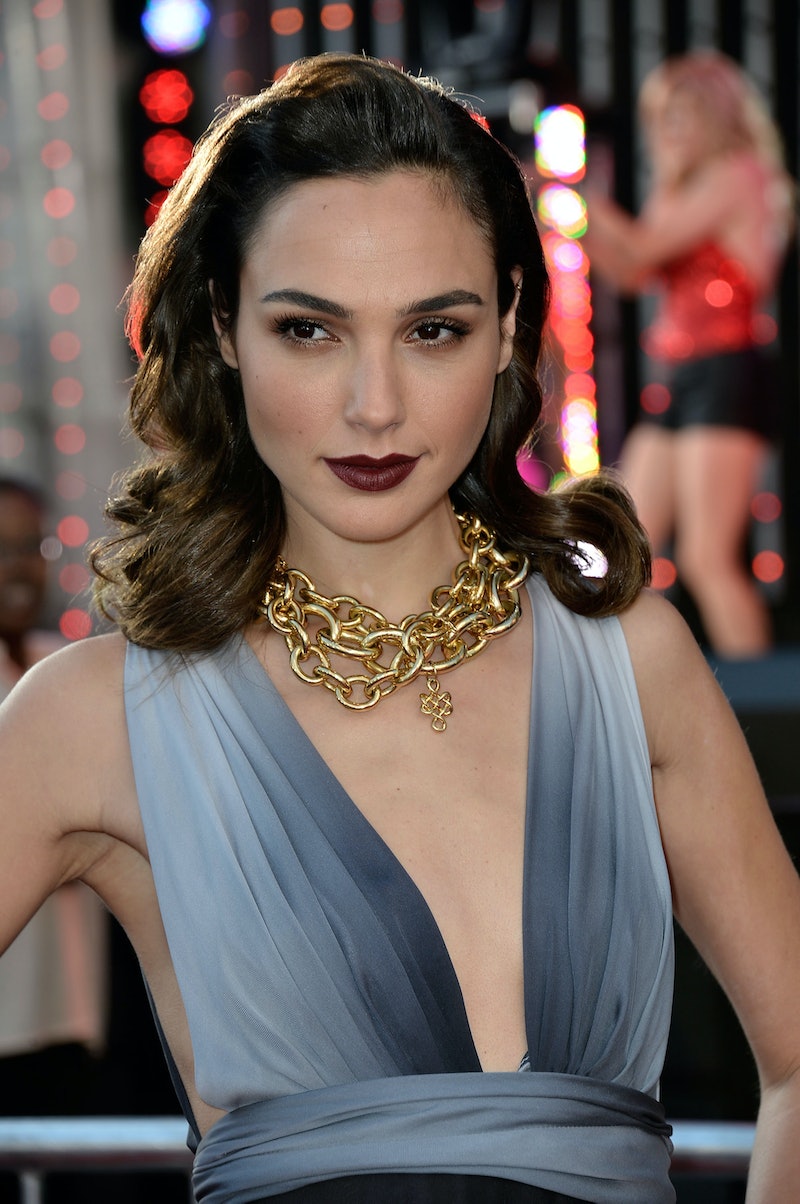 Just in case you were too busy enjoying this summer's blockbuster movies to remember that there will even more coming next year, good news: Warner Bros. just did us all a favor and released six new Batman V. Superman stills to prepare you for their 2016 superhero mash-up. While there's lots of intriguing stuff to see in the photos — including the new Bat Signal, what appears to be Superman celebrating Halloween, and a very un-bald Lex Luthor — the picture that has been garnering the most attention is one of Ben Affleck's Bruce Wayne and Gal Gadot's Diana Prince in a suggestively sensual pose. Will Batman and Wonder Woman date in the movie?

In reality that prospect wouldn't be as preposterous as it sounds. In her over 70 years of comic book history, Wonder Woman has been romantically paired with many different characters — including Superman, Aquaman, and, yes, Batman. Admittedly, her flirtation with Bruce Wayne was brief: they kissed once during the 2003-'04 run of the JLA series (Justice League of America). The couple was soon distracted from their budding romance by the business of saving the world, and their relationship didn't end up going anywhere, although they remained friends.

A longer history of the Wayne/Prince relationship comes not from the pages of DC comics, but from the Justice League animated series that ran from 2001-'06:

While their romance was never officially consummated — this being a children's cartoon and all — Batman and Wonder Woman flirted constantly for five seasons, with Bruce Wayne officially declaring his love for her in the memorable episode "This Little Piggy"... in which Diana was turned into a pig by the sorceress Circe and Batman has to sing a song to reverse the spell. (He croons the jazz standard "Am I Blue?" with a surprisingly smooth voice.)

Now, this isn't to say that Batman V. Superman is necessarily going down the same road as the Justice League series. But I wouldn't rule out the possibility, either. That picture of Bruce Wayne in a tux talking with a dark-haired beauty in a fabulous gown while at what appears to be some sort of gala... Does it remind you of anything?

We all know how things turned out between Bruce Wayne and Selina Kyle in Christopher Nolan's The Dark Knight Rises. Could Zack Snyder be heading down a similar path with his new iteration of the Caped Crusader?

The pairing of Batman and Wonder Woman could certainly bear some interesting fruit for the franchise. They say opposites attract, and that would certainly be the case here. Watching Bruce — with his pessimism, his brooding pursuit of justice, and his love of blacks and greys — interact with Diana — with her optimism, her ability to feel compassion for anyone, and her love of red, white, and blue — could potentially yield some interesting fireworks between Affleck and Gadot.

Of course, this is all supposition based off one promotional picture, so perhaps we should at least wait until the full theatrical trailer is released before making any further conjectures. Meanwhile, I'll leave you with this adorable gif: