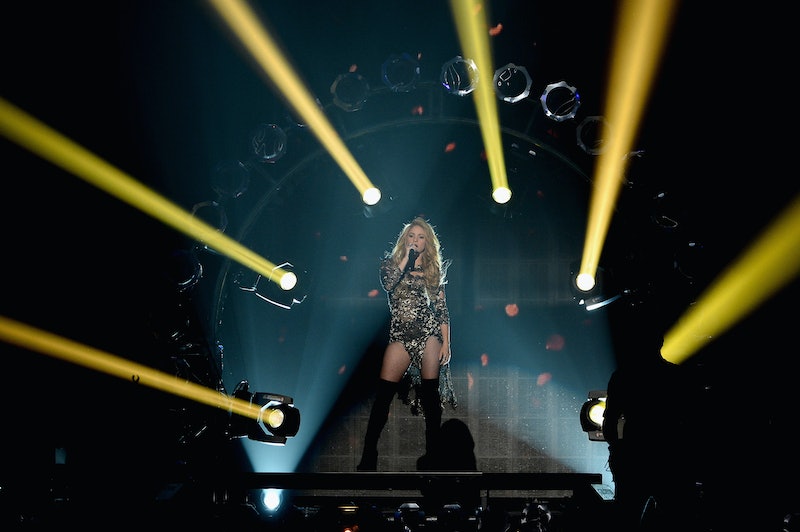 The singer famous for underscoring the sexual currency of a woman shaking her hips, Shakira, spoke to Glamour about the future, the male-dominated music industry, and her own body image for the magazine's February issue. In many ways, the singer's interview is "refreshing," but it also highlights a problem that is quite the opposite.

After saying that she has career aspirations beyond being "on earth just to shake it and shake it endlessly" — which is refreshing, if you subscribe to the watered-down, seemingly ubiquitous notion that anything positive a celebrity says is somehow revelatory — Shakira speaks about her own body image in an industry that demands excessive thinness from its stars.

When asked if she received any criticism from her "Latin fans" for dying her hair blonde or rocking a thin, extremely fit frame, Shakira said, "At the beginning. But my man, Gerard, prefers meat over bone. He doesn’t like too skinny." She goes on to says that her boyfriend Gerard Piqué's preference "takes pressure off" noting that working on album and mothering a child leaves little room for dieting.

So sure, the notion that Shakira is willing to let go of the pressure to stay thin and reward herself with food that makes her happy without feeling guilty ("I like these pastries in front of me," she notes during her Glamour interview) is refreshing, but the source of her strength against body image dictates is what's troubling.

Shakira did not come out against the industry. She is not combating the stereotypical definition of beauty or declaring her refusal to participate in the practice of maintaining thinness for others. Instead, the singer offers up her boyfriend's approval as the motivation for shirking standards of celebrity beauty. Shakira isn't ignoring superficial standards, she's simply found a different set of rules dictated by someone other than herself. Her "man" "doesn't like too skinny," so she's put less pressure on her quest to remain thin, but by her own logic it stands to reason that if her significant other preferred thinner women the pressure would be back on.

While it's always nice to hear that someone as glamorous as Shakira is putting less pressure on her physical form — though from the looks of her cover shoot, she's still rocking a nigh-unattainable image of beauty — her statements are not refreshing. That credit should be reserved for the women like Jennifer Lawrence who call out fat-shamers and vow to never be "hungry to make other people happy" or Mindy Kaling, whose celebration of her body shape combats the absurd notion that a shape like hers is somehow "other" and that slimmer celebrity bodies are the norm.

Women who decide to combat the cultural policing of their bodies of their own accord are inspiring and, I suppose, refreshing. Women who are excited not to starve themselves because then men in their lives deem it appropriate are probably happier than women who go hungry on the quest for thinness, but they are not de facto body image role models.

More like this
UK Viewers Will Have To Wait To Watch The Handmaid’s Tale S5
By Maxine Harrison
Help! I'm Not Getting Any Attention On Dating Apps. What Can I Do?
By Sophia Benoit
The 12 Best Strapless Bras That Won’t Slip & Fall Down
By Audrey Williams and BDG Commerce
Megan Rapinoe's Relaxation Hack Is Super Dreamy
By Carolyn Steber
Get Even More From Bustle — Sign Up For The Newsletter