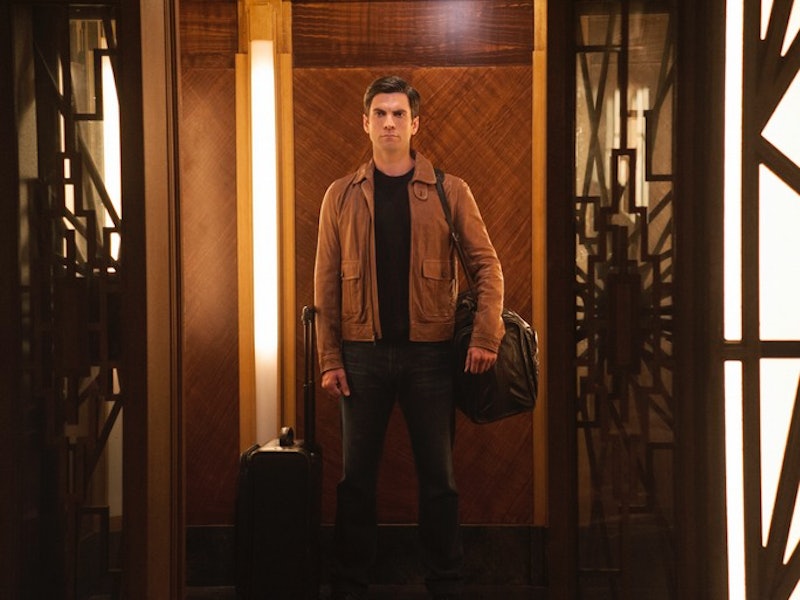 Last week's Halloween-esque episode of American Horror Story: Hotel showcased a variety of real-life serial killers, who were responsible for so many atrocious murders that I fear I won't be able to sleep again for weeks. Possibly ever. But even amid all of those heinous criminals at that dinner table, there was one sinister character that wasn't in attendance… or was he? Though the identity of AHS: Hotel 's 10 Commandments Killer has yet to be revealed, I'm starting to have a sneaking suspicion that our perpetrator could turn out to be none other than our protagonist detective, John Lowe. That's right, folks — I'm making a bold claim here and saying that there's a good chance Det. John Lowe is the 10 Commandments Killer on AHS: Hotel , though, I don't necessarily think even he is aware of this fact just yet.

Pulling a bait-and-switch on viewers is certainly something well within Ryan Murphy's wheelhouse. I mean, who would suspect the show's classified "hero" would turn out to be the big bad villain? It'd be a genius move, and not something I would've ever suspected until "Devil's Night" aired. You see, I found it extremely odd that Mr. March invited John to his killer-themed dinner party. If he had no intention of killing him, then why was he there? Perhaps this was March's way of trying to groom him into the killer he's becoming, much like he did with the rest of his dining companions.

And let's not forget how March said that he thought John was ready for this. That's not usually something you'd say to any normal human being, let alone a police detective. So why would he think John would be into this sort of thing? Perhaps because March knows what John has really been up to lately. But if that really is the case, I don't think John knows what he's become just yet. Much like what Ginny experienced in Harry Potter and the Chamber of Secrets, I think that John occasionally blacks out and is unaware of his actions for a certain period of time. He doesn't believe himself to be the killer because he honestly doesn't remember murdering anyone. I'd say it's just like Fight Club, but I hear there's a strict policy against talking about it.

This theory would also help to explain the 10 Commandments reference Sally said to John a few episodes back. She said something about how her actions weren't so bad since it wasn't like "breaking one of the 10 Commandments." Initially I thought that meant Sally herself could be the 10 Commandments Killer, but what if it's trickier than that? What if she knew what John's been up to and was trying to mess with his head? It certainly sounds like something she would do. And Sally believes that she and John are meant to be… perhaps the couple that murders together, stays together?

Mark my words, there is way more to John than meets the eye. (I mean, who in their right mind would ever want to stay at this hotel?) So he may end up surprising even himself when the 10 Commandments Killer is eventually revealed, especially if all he has to do is look into a mirror.