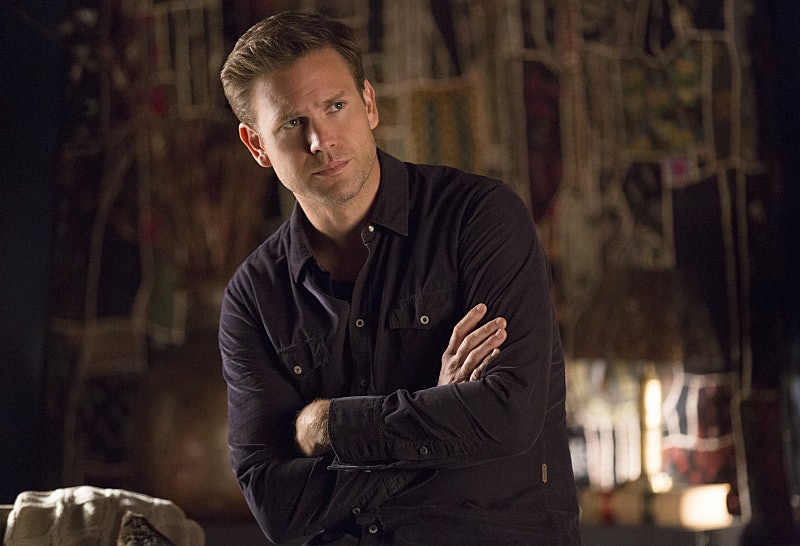 In what's quickly becoming a beloved tradition, The Vampire Diaries introduced a new flash forward during Thursday night's episode "I Carry Your Heart With Me." But rather than focus on Damon, Stefan, or Caroline, this TVD flash forward showcased Alaric being a dad. Yup, our favorite dreamy professor is apparently a doting daddy of two adorable twin daughters three years from now. (I know, I still haven't stopped swooning over the idea.) They seem like a pretty happy family, though I couldn't help but notice that the mother (whoever she may be) was MIA the whole time. Is it Jo? Is it someone new? Is it Caroline? (Hey, you never know, though I have a feeling that the fact one of them is named Josie is kind of a big clue.) However, in true TVD fashion, things aren't always as happy as they appear.

Shortly after the girls run off to go get ready for bed, their giggling suddenly stops, which prompts Alaric to retrieve a massive gun from a kitchen cupboard (where we all keep such helpful appliances). So what was it that stifled his children's squeals of joy? It wasn't so much what, but rather who. It turns out that they noticed Damon standing in the front door and he did not exactly look happy to be there. It probably has something to do with the fact that a dangerous female assassin is currently after him, but that's just a wild guess on my part.

But the most stressful part of this situation isn't why Damon is upset, but rather who he seemed upset with: Alaric. You guys, I have loved this bromance since its conception, so you can only imagine how I felt when Damon was gazing upon his former bestie in such a threatening way. He told Alaric that no one was dead, but if he doesn't do exactly what he says that could change really fast. So yeah, Damon was basically threatening to kill Alaric's daughters if he didn't follow orders. Way harsh, bro.

Now given the logical assumption that these flash forwards are deeply connected with the Phoenix Stone, it makes sense that Alaric would play a significant role in all of this, given that he was the one who brought the mystical object into everyone's lives. But what exactly can he do that will help Damon? Or maybe Damon isn't there to see Alaric directly, but rather to see his wife. If the stone brought her back, then she may know more about it than anyone else. Let's just hope that whatever Damon wants can be accomplished fast. Because the sooner these two go back to being BFFs, the happier I'll be.