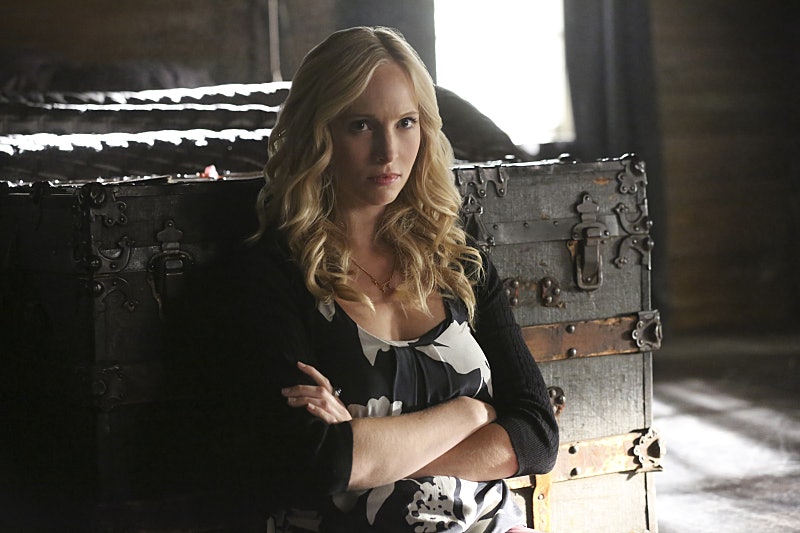 If you were thinking that The Vampire Diaries flash forwards wouldn't become a common occurrence throughout Season 7, then you were dead wrong. In fact, I'd say we can now count on them to be a weekly addition to each episode, and a very welcome one at that. (It's impossible not to find this future timeline intriguing.) But while last week's premiere focused on Damon and Stefan, this week's TVD flash forward centered around Caroline. So what is our favorite Mystic Falls blonde up to three years from now? By the looks of things she's become some sort of TV producer, which is completely fitting for so many reasons. But the biggest takeaway about TVD 's Future Caroline is that she's engaged to someone and we have absolutely no idea who it is.

The optimist in me wanted to say that she's getting married to either Klaus or Stefan. (Yes, I know that Klaus isn't even on this show anymore, but much like most of the characters on this show, my love for Klaroline will never die.) In all seriousness, though, I would've chosen Stefan as the more likely suitor to have put a ring on it. But come on, you guys, when did this show ever choose the Happily Ever After option? Almost never, right? So it should come as no surprise that Caroline's mystery man is not Stefan (which was confirmed in the later portion of this flash forward), and perhaps even someone brand new. However, that doesn't necessarily mean this guy doesn't have direct ties to Mystic Falls.

In the flash forward (which takes place in Dallas, Texas, by the way), Caroline's assistant informed her that her fiancé had called and is planning a surprise trip for them to take to Mystic Falls. This immediately put Caroline on edge. "We can't go back there," she worriedly remarked. Why? What happened to make her look back on the place where she grew up with such fear? And is her attacker the same person who came after Damon and Stefan? All of that still remains a mystery, but one that I'm very much looking forward to solving. And if the writers also feel like throwing a few Caroline-wedding-planning scenes into the mix, then I certainly wouldn't complain. Just saying!