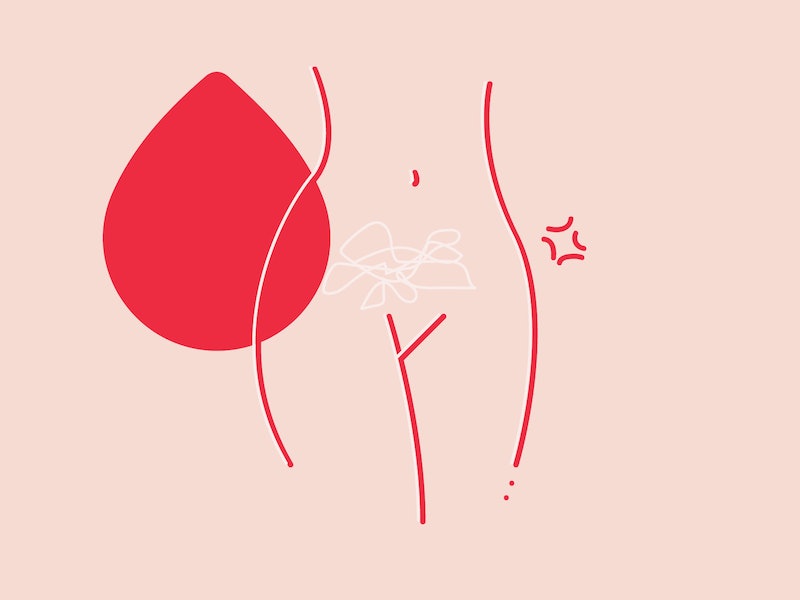 In college, I dated a guy who was constantly asking me when I was getting my next period. At the time, I was on a birth control method that prevented me from getting my period or, if I did get it, it was a drop or two of blood, just enough to let me know, “Woohoo! I’m not preggers!” I loved not getting the periods I had all throughout high school, but he was less than thrilled. You see, he was really into going down on, well, bloody vaginas. I was about 20 then, and I was quite certain he was the only man in the world who felt that way. Despite the pain it caused when he broke up with me for the lead singer in his band, I was thankful that I’d likely never again have to listen to a guy moan and groan about how he was missing out because my body wasn’t producing the menstrual blood he craved.

What I didn’t know then is that, yes, men being into period sex and even enjoying a mouth full of blood is “a thing.” As Maureen O’Connor wrote this morning for NY Magazine, not only are guys into it, but they’re “actively seeking and looking forward to it,” one guy commenting on the sweetness of it calling it, “strawberries-and-cream sex.”

One night, years after I split with the college vampire, I met a friend of a friend who wanted to come home with me. I was on a different birth control then, and was on one of the first heavy days of my period. I politely told him that, as much as I would love to take him home, I had my period. What followed next was exactly what O’Connor wrote about in her piece: He was into it...like, really into it. I was really into him, so I relented and took him home… where I learned that, OMG, period sex is just not for me.

You can’t shame someone for being into period sex, because we all have our “things.” Just know that you can expect these 16 things when you travel down that red road.

ANY SHEETS LIGHTER THAN BLACK WILL NOT SURVIVE

But black sheets are really Goth, so there’s that.

SO MAYBE YOU SHOULD OPT FOR THE SHOWER!

You don’t have sex in the shower enough anyway.

You know, if he’s one of those who likes to go down and kiss afterward.

IF NOT, YOU’LL AT LEAST END UP WITH IT ON YOUR FACE

As you turn away from the oncoming kiss and he gets your cheek instead.

Sex, in general, already has a smell to it. Toss in the scent that comes with your monthly period, add a tinge of iron, and have fun with that.

IT’S GOING TO BE A SLIPPERY TIME

With that blood all over the place, you’ll be slippin’ and slidin’ on each other. Just be sure you don’t slip and slide onto the floor.

WHICH MEANS YOU CAN SKIP THE LUBE

It's called gravity, you guys.

It's just so hard to get it out of every single nook and cranny the first time around.

YOU'RE OPENING YOUR CERVIX TO A WHOLE BOATLOAD OF BACTERIA

It's true! Dr. Vanessa Cullins says that condom use is extremely important during period sex to keep your body safe from STDs and bacteria, because it's all so vulnerable and open in there during that time of the month.

PAPERTOWELS ARE GOING TO BE YOUR BFF

Because at some point, you just might want to wipe that blood off your cheek from 10 minutes ago.

I have a friend who was hooked after a bout of period sex (and the orgasms did wonders for her cramps). Granted, she has sex when she doesn't have her period, too, but now she needs to invest in some black sheets.

More like this
Bumble's "Compliments" Feature Lets You Message Before You Match
By Lexi Inks
Wimbledon Alters All-White Kit Rule Amid Candid Period Discussions
By Catharina Cheung and Rachel Mantock
Emily Ratajkowski & Pete Davidson's Astrological Compatibility, Revealed
By Nina Kahn
Are Sagittarius & Capricorn Compatible In A Relationship? Astrologers Weigh In
By Kristine Fellizar
Get Even More From Bustle — Sign Up For The Newsletter