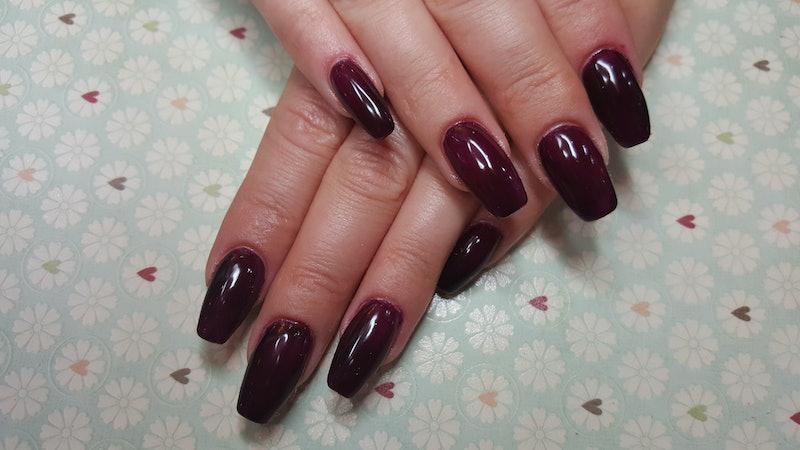 Seems like colorful, creative acrylic nails are the trend in manicures right now, and if you're not already on the long nail bandwagon, chances are, you've thought about jumping on board. Celebrities in particular are all about working the fierce claws, but the cool girls you know IRL have probably tried 'em out, too. If you're considering getting them done, though, here are seven things you should know before you get acrylic nails.

It's tempting to head straight to your nail salon when you see an especially fun set on your bestie or your Instagram feed. Kylie Jenner frequently shows off her bold looks to her 40 million followers, and we've seen them on Rihanna, Nicki Minaj, Lady Gaga, and even Adele, too. Even more dramatic? "Stiletto nails," aka the pointy acrylics. Sure, there's a bigger potential for accidentally injuring yourself (in fact, it's highly likely for a klutz like me), but man, they just look so cool.

Yup, gone are the days of the tacky '90s acrylics — the trend's modern reincarnation is anything but. However, there are a few things you should consider when you've got acrylics on your mind. Here's what you need to know before you take the plunge:

Sometimes, pain really is beauty. "When having a set put on for the first time, probably will feel a bit ‘tight,'" says celebrity manicurist Bethany Newell. If they annoy you for more than a day or two, she recommends heading back to your salon and asking them to try a tension-relieving technique — your manicurist may suggest shortening the length or changing the tip sizing, she says. If they really bug you, you can ask to have them removed.

Acrylic nails aren't a one-and-done kind of manicure — nails grow, of course, so they require some upkeep. Newell reccomends getting fills every other week, not only to keep them looking in tip top shape, but also to make sure the nail is healthy. "Sometimes moisture can get under the acrylic, which can cause fungus," she warns. In that case, you'd have to have the acrylic removed and then reapplied. "In mild cases the fungus can be buffed away and treated, while in other cases the recommendation would be to leave the nails acrylic-free for a while to heal the nail," she says.

Plus, go too long and they can break off — ouch. If you decide to go three or four weeks between fills, as many people do, just be warned.

The Price Can Add Up

Because you have to have them filled every couple of weeks, make sure you have room in your budget to keep up. Depending on what you're having done, where you live, and what salon you go to, "a new set can be in the $100+ range, and fills somewhere in the $50 or $60 range," says Newell. Of course, it could be cheaper, but be prepared and do your research before making an appointment. Not that there's anything wrong with splurging on manicures — treat yo self, right? — but make sure you can financially commit to it if you're planning on having them for a while.

Neglecting Them Can Lead To Nail Damage

Aside from the fungus (ugh), failing to keep up with your manicures may lead to more long-term damage to your nail beds. "Often times between fills clients may start to 'pick at' the lifting acrylic, which can cause damage to the nail," says Newell. To avoid damage, make sure whoever removes your acrylics knows what they're doing. If they're removed properly and you take care extra care of your nails afterwards, you can usually avoid damage. "Once they have been removed it becomes important to be sure that they are kept short for a while and making sure to use moisturizing oils to keep them healthy," she says.

They're Not A Long-Term Commitment

Getting acrylic nails doesn't mean you're stuck with them for a while. "Some people like to put on acrylics for a special occasion and then remove them after a short period," says Newell. "There is no harm in this again if they are being put on well and also removed well by a nail professional." If you just want to take 'em for a trial spin to see if you like them, by all means, do.

Acrylic nails can be super fun, but they may complicate a few things that just shouldn't be that difficult. Picking up coins is a struggle, dealing with your contacts becomes dangerous, auto-correct has to take care of a lot of typos, and finger food? Pshh.

There Are Endless Shape And Color Options

Even though there are some things to think about before you decide on acrylics at your next nail appointment, there's no denying that they're fun, stylish, and trendy. Whether you opt for gel polish or regular, long and pointy tips or rounded and elegant, you can do almost everything with acrylics as you can with your natural nail, and more. You can look to your favorite celeb for inspiration, or go with something understated and simple. The options are endless — just make sure you 'gram a pic after you get them done!

More like this
12 July 4th Beauty Sales To Jump On ASAP
By Jordan Murray
The Best Of June's Beauty Launches, According To Our Editors
By Bustle Editors
Yes, You Can Buy Off-White’s New Beauty Range In The UK
By Tomi Otekunrin
Glossier’s New Olivia Rodrigo Campaign Is Giving ‘90s Groovy Chick
By Tomi Otekunrin
Get Even More From Bustle — Sign Up For The Newsletter