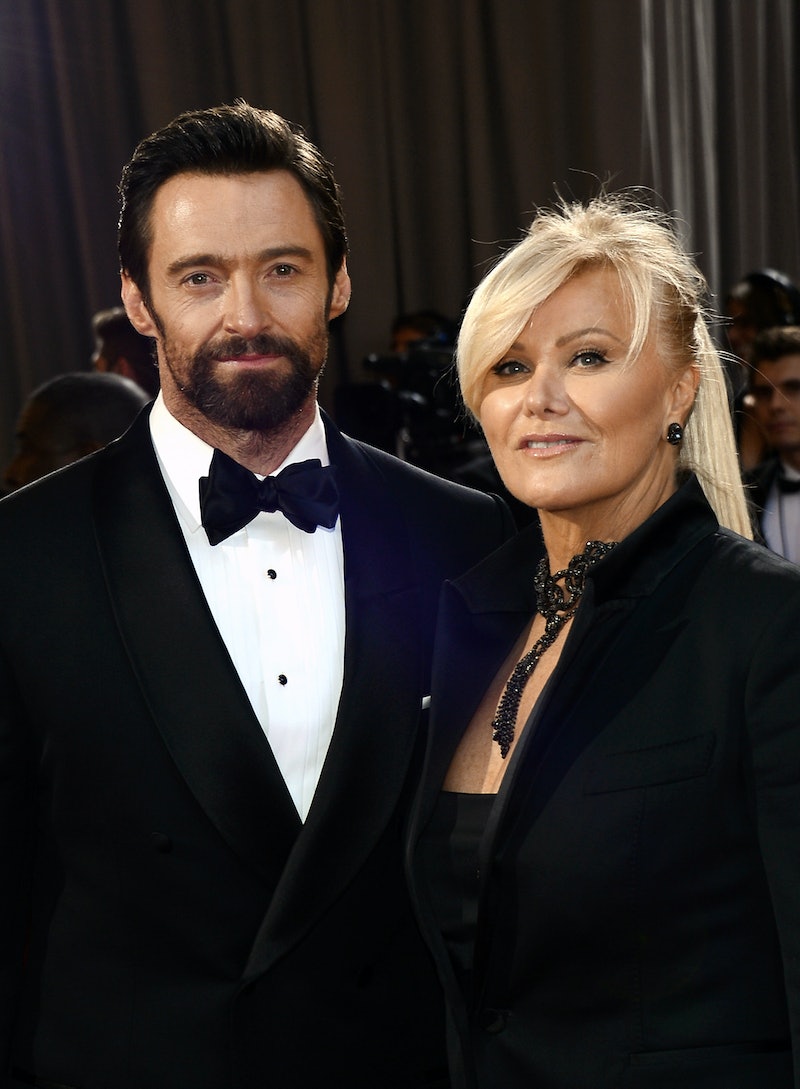 Once again, for about the bazillionth time in his career, Hugh Jackman has had to deny rumors about his supposed homosexuality, and, understandably, it's getting to his wife. Deborra-Lee Furness has now spent 13 years being called ugly by the media, hated by fans, and generally debased as a woman in a happy marriage, which is kind of disgusting when you think about it.

We, as fans and followers of celebrity culture, spend our days wishing our favorite hotties aren't gay, and then when they aren't, we pray they don't only date stick figures, or that they aren't complete misogynists, hopping from one bed to the next. So then, when they are straight, and can actually have successful and long-lasting relationships, we shame their wives? Why do we suck so damn much?

Because that's pretty much whats happening here. Hugh Jackman does musicals, in addition to movies. He is good at musicals. So were Frank Sinatra, Bing Crosby, Bob Hope, and we certainly never just assumed they all wanted to bone each other. We called them entertainers, because that's what they were. Being talented at more than one thing is a gift worthy of admiration. Not scorn and coarse assumptions.

When she's not being mercilessly caged in the shadow of her husband, we can admit that, actually, she's attractive. She has interesting style, has accomplished a lot in her own right (she produces and directs in Australia), and, in interviews, she comes off like the super-cool friend of your mom's you sort of always wished you could be like. So what exactly is so bothersome about Hugh Jackman being attracted to all that?

Here's a shocking revelation: Celebrities probably fall in love much like we do. Which means they don't just gaze at each other and think, "Our faces would be genetically compatible in mating. Let's rub our private parts together." We don't fall in love with people's looks — we fall in love with their laugh, the way they sigh in their sleep, or the fact that they know to make you your favorite food when you're sad. Why aren't Hugh and his wife allowed the same luxuries? Is it so hard to believe that Hugh would choose a woman he enjoys being around more than a vacuous but beautiful model?

It's a huge double standard, and we the proletarians hate it, so why are we enforcing it? Being on Broadway and marrying a woman who probably makes him happy does not a gay man make. I personally think Hugh Jackman's marriage is one of the most attractive things about him. He is beautiful, talented, and balanced enough to have a lovely home life with a wife he loves and children he adores. He isn't out there screwing a new young starlet every week, and that's pretty darn sexy if you ask me. Plus, Furness definitely seems like a fox in the bedroom, so let's not be haters just because she has the nerve to be married to Hugh Jackman. It's kind of douchey on our parts.