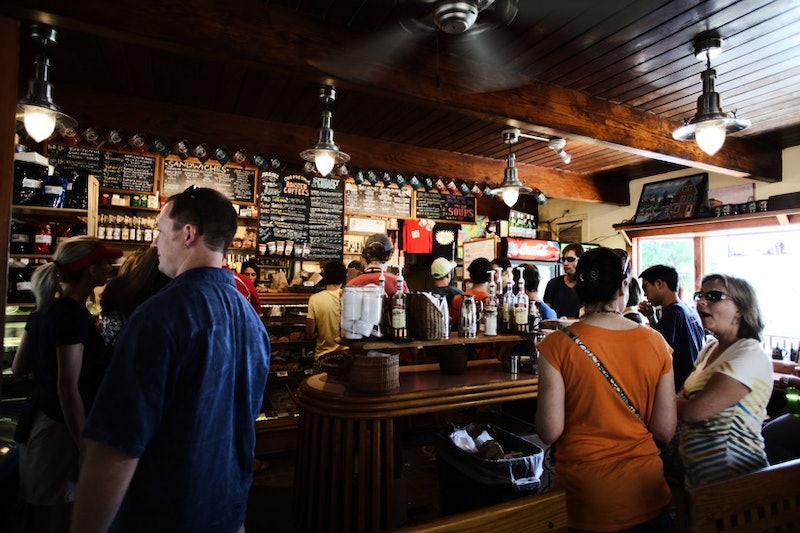 No disrespect to the wonderful study of meteorology, but I don't usually care to talk about the weather. And chances are, neither does the stranger/acquaintance you're trying to have a conversation with. But as it goes, making small talk with strangers, or just anyone you don't really know too well for that matter, seems to be an inevitable thing that works its way into the awkward moments of our lives.

There you are, standing with this individual you may have just met — maybe you're waiting for your mutual friend to come back from the bathroom, or trying to gracefully fill awkward silences at a dinner party, or you may both be conveniently hitting up the coffee machine at work. Time seems to go way slower than usual and you don't know where the heck your personality ran off to. After you've used up the "how are you" or "so what do you do" questions, and given your own generic answers, the conversation comes to a painful lull.

Type "small talk" into your search bar and one of the first definitions that comes up is something along the lines of: polite conversation about unimportant or uncontroversial matters, especially as engaged in on social occasions, according to the Oxford Dictionary. Well, that sounds like a pretty awful waste of time if you ask me. And yeah, sometimes it's all you can do to dissipate the awkwardness, but it doesn't have to be so meaningless. That's not to say that you have to delve into an existential take on the meaning of life or anything, but there are definitely some nice ways you can avoid that small talk and walk away from that conversation feeling a little more fulfilled.

1. Don't Be Afraid Of Details

If they're asking you how your weekend was, the quickest way to turn small talk into a real conversation is to go beyond the boring, "it was good." Why was it good? What did you do? So maybe you didn't run a marathon or get your hotline bling on with backstage passes to Drake's show. A Netflix night in or even hours of staring at your blank Microsoft Word document can make for just as good conversation. Definitely better than those automated generic answers.

Sharing that extra detail about your life helps make any conversation less awkward and boring, according to Lifehacker's guide to tackling small talk. Any amount of detail you add (without over-sharing, obviously) will just give the whole interaction a more personalized, human element that strays from the sins of empty small talk.

So maybe you just asked them how their weekend was and they broke the rules and gave you the bland "it was good" answer. Tsk tsk. They obviously didn't read this article. So take hold of that and ask them what they did. And when you do, actually listen to what they say and try to find something more you can either ask about or to which you can relate. Otherwise, you run the risk of giving this convo the shelf life of about a minute and thirty seconds.

You'll show them you're actually interested in what they have to say, and it'll probably lead to some way more engaging back-and-forth. One of the keys to being a good conversationalist isn't just about what you say, but rather, demonstrating interest in other people and asking them those questions. Because as pointed out on Lifehack, most people prefer to talk about themselves rather than hear about you. And who knows? Maybe you've just found your ultimate biking buddy for those weekend rides.

3. Arm Yourself With Interesting Conversation Topics

Like any well-seasoned military general, when navigating the field of social graces and witty banter, you must go in prepared so as not to be struck down by the awkward lull of a conversation. Get caught up on the news, dig into some pop culture, or maybe bring up a cool food you recently tried. As Susan Krauss Whitbourne, Ph.D, professor of Psychological and Brain Sciences at the University of Massachusetts Amherst told Psychology Today, the topics don't have to be weighty nor do they have to involve in-depth expertise.

When speaking with people we don't know very well, we sometimes tend to avoid bringing up anything beyond surface-level topics because we don't yet know how the other person thinks and we worry about how they'll perceive us. But it's time to toss that petty nonsense aside and let yourself have a real conversation.

You may not really know the first thing about them beyond the context in which you've met them, but don't let any fear of judgment due to a lack of familiarity stiffen up your conversation. Of course, you should remain polite if that's how you feel most comfortable, but the second you start thinking of this person as someone you're friendly with, it'll become easier to get a little more comfortable with being more open.

Opt for some playful humor or really any friendly gesture that isn't completely calculated and fake. I'm sure we can all pick up on when it seems like someone is only talking to us out of mere obligation or a means to fill the silence. Even if that may be the case, because I mean it's not like we have to be besties with absolutely everyone we interact with, at least try to make it more enjoyable and engaging for the both of you. Try to avoid the empty interactions whenever you can.

5. Don't Try To Escape Too Soon

Give it a chance! A lot of the times, when we're with someone we don't know very well, we tend to want to wrap up the conversation to avoid the risk of running out of things to say, or maybe because we can already predict how the conversation is going to go, as dating and confidence consultant Nick Notas pointed out on his blog. So we play our etiquette cards, flimsily through them into the interaction, and discard any chance for a meaningful exchange or any substance to develop. Notas also provided some great tips on how to really give the convo some momentum if you're feeling stuck early on.

6. But Then Again If All Else Fails, Just Bail

Let's face it, some convos are just lost causes and as hard as you may have tried, there's just not too much you can do to salvage it or make much more out of it. Sometimes it really is better to just make a clean and graceful exit when the conversation has run its unfortunate course. Debra Fine, lecturer and author of The Fine Art of Small Talk, suggested to Real Simple to use the phrase "I need," such as needing to get food, use the restroom, or meet someone. And that's it! You're done. Phew. You can breathe now.

Sometimes you just can't avoid small talk, but if you can... then why not try some alternatives, right?