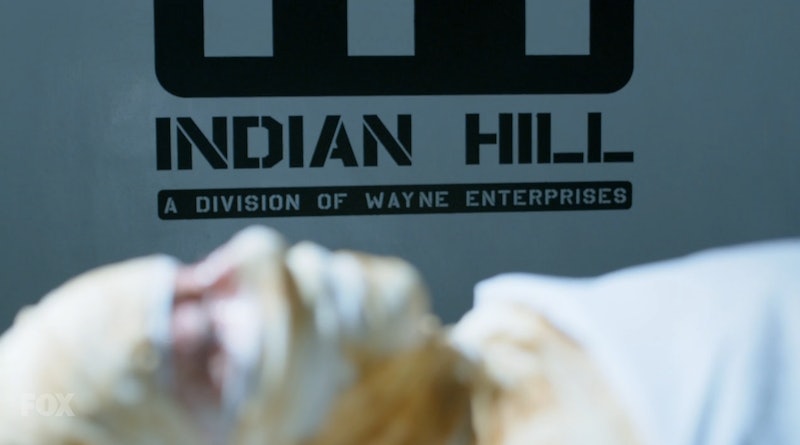 The sinister side to Wayne Enterprises has been one of the ongoing threads of Gotham Season 2, and close viewers will note that when the show introduced the sinister Indian Hill experimental lab, there was a huge sign that attributed the facility to the work of Wayne Enterprises. And it looks like in a strange twist, it's Bruce Wayne's own company that will be responsible for creating dozens of villains at Indian Hill.

Producer and writer Rebecca Perry Cutter teased to the Observer that Indian Hill, and the rest of Season 2, will dive into the creation of a signature Batman villain. Since Season 1 of the show referred to Indian Hill as a chemical treatment plant (on top of a Native American burial ground, no less), that means the villain is probably one of Batman's many foes who was created by a twisted experiment gone wrong or an exposure to deadly chemicals.

And out of all of Batman's foes, there's one obvious choice... a certain creepy clown, who in some versions of his origin story falls into a vat of toxic chemicals while in a nuclear facility. But beyond simply yet another Joker tease (which Gotham has really only committed to once, with Jerome), there are plenty of possible villains for Gotham to choose from.

This is kind of an unfair guess, since the wonderful B.D. Wong (the voice of Shang from Mulan!) has just been cast to play the villainous Hugo Strange, according to Comicbook.com. The website also reports that Strange will be the head of both Arkham Asylum and the Indian Hill facility.

But there are still some mysteries to be had — will Hugo Strange be the mastermind behind Indian Hill, or just another lieutenant in the increasingly complex hierarchy of Wayne Enterprises?

This is another obvious choice, since the doctor and his wife, Nora, were just cast on Gotham, according to Zap2It. So some version of Dr. Victor Fries will appear on the show, and the only thing that remains to be seen is whether his cryogenic experiments will go horribly wrong during Season 2, or, like Robin's parents and other Gotham winks to continuity, there will just be hints about Nora's future illness and veiled references to Victor's experiments.

Former actor turned brutish villain Clayface was chemically changed into a Thing-like blob capable of transforming into any and every disguise. And those chemicals could have been provided by Indian Hill, if the transformative actor was brought in for experimentation. And back at Comic-Con, the Gotham crew dished that Clayface would eventually be brought on the show — now would be a perfect time.

Also teased at Comic-Con, this lesser-known Batman bad guy doesn't have a physical mutation, but he does have a deep psychological issue — an obsession with Alice in Wonderland.

Another thuggish villain, the Killer Croc in DC Comics is a wrestler born with a serious birth defect that makes him develop into a scale-covered "monster" who would fit right in with the rest of the experiments in Indian Hill.

There will surely be some form of Indian Hill Joker tease, whether it's the return of one of the Red Hood goons or a giggling villain in the background of a tracking shot. But if Jerome taught us anything, it's not to get too excited at the possibility of the Joker on Gotham, no matter how many clues it drops.