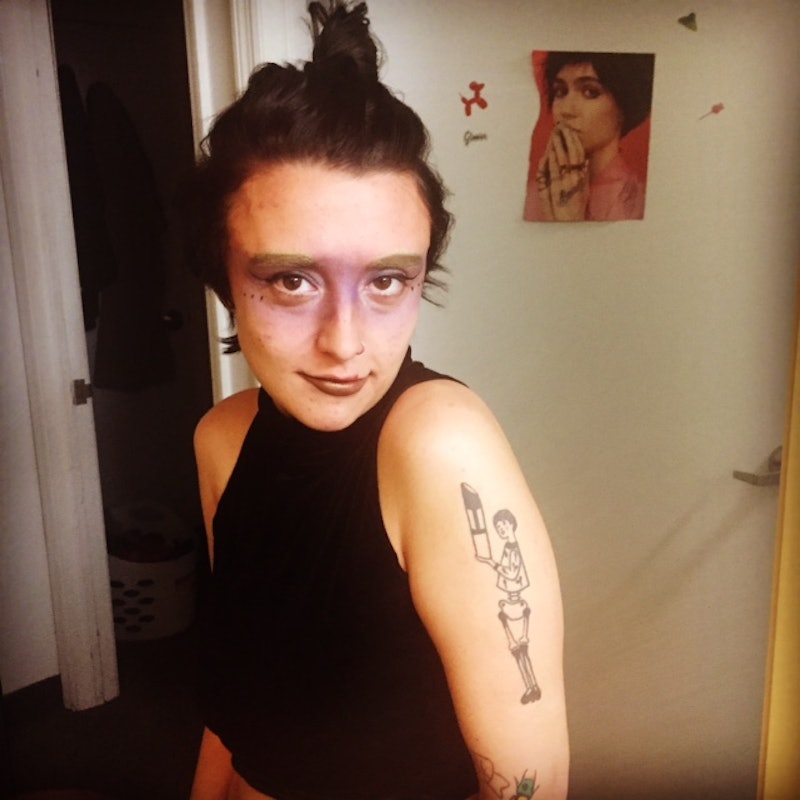 About six months ago, I started coming out to loved ones and colleagues about my genderqueer identity. For me, this process couldn't feel complete without informing people of my new pronouns. Telling people to use "they/them" rather than "she/her" when referring to me took much longer than I thought it would. I no longer felt that I identified with "she/her" pronouns, nor did it feel true to myself and my identity to keep using them now that I was out. But something caused me to hesitate. I was afraid that I would be asking my friends and family too much by requesting they change the language they use to refer to me. I also feared that maybe I wasn't entirely sure about my identity yet, and that asserting my desire to use "they/them" pronouns was a big leap. What if I changed my mind again? What would people think?

So, I told everyone that they could refer to me as she/her or they/them, with the exception of my partner and Bustle editor, who I asked to exclusively use they/them. Of course I felt inclined to be perfectly honest with the person I'm in love with. But the fact that I told my editor (who ensured that through other editors and stories published that I would not be misgendered) speaks to how seriously I felt about it. I knew in my heart that "they/them" felt right. I didn't want "she" to be attached to my name, my work, or my legacy. My personal life, however, was another matter entirely.

Gradually, I gained confidence about my identity and realized how ridiculous it was to worry about "imposing" on people by asking for them to use my correct pronouns (#cisprivilege). However, my fears about the consequences of making this important change remained. Was I ready to commit to they/them pronouns? Was I ready to deal with regularly being misgendered? Yes, these were the pronouns that I knew I most closely identified with, and I wanted people in my life to use them so badly. But was I ready to face people using the incorrect pronouns, and then possibly correcting them when they did? Feeling the way that I do about my gender identity, I already felt disoriented and strange when hearing people refer to me as "she." So if I officially changed them, it'd be like there's no going back. If I heard someone misgender me, I would know. My friends would know, and I would feel their eyes on me, a wave of discomfort blanketing our group. I'd feel pressured to defend my identity, and when I did so, sometimes I'd be made to feel bad that I spoke up.

I thought in circles about all of these possibilities until finally, by the end of August, I took the plunge and informed everyone in my life that I now use they/them pronouns, and that they should use them as well when referring to me. And it felt amazing.

Every time somebody used my proper pronouns, and when friends consistently used them the right way, I felt so liberated. By being honest about who I was and what I needed from those around me, I was rewarded generously. Every "they" or "them" that I would hear felt like a small victory. Whenever I heard my mother talking to her friends about me while using the right pronouns, or correcting herself immediately when she'd slip up, my heart would skip a beat. This is what it feels like to be seen. This is what it feels like to be validated. But unfortunately, coming out caused me a lot of strife as well.

There were many others in my life who continued to misgender me, even after I had informed them of my pronouns (and, sometimes, even after I had corrected them multiple times). I felt the sting just a little more whenever a stranger would use "she," now that I was used to my friends, family, and coworkers seeing the real me. It never feels worth it to correct strangers or casual acquaintances, but it still hurts. It makes me feel less authentic, less me, and if I'm having a bad day, it can make me feel dissociative. It makes me feel frustrated at cis people's privilege of looking the way they identify. I look past cashiers as if in a daze when they call to me, "Miss, you forgot your receipt!"

I'm not a woman. I'm not a "Miss." I'm not a "she." I'm not a "her." If a cis woman with short hair, or a feminine looking cis man is referred to as the wrong gender, their frustration is validated. No cis woman with short hair wants to hear "sir," because odds are she identifies closely with her womanhood, and with her right to be called "her." But my frustration, and the frustration of other genderqueer people, feels like that too, yet it is always invalidated. We are told our pronouns are unnatural, confusing, or grammatically incorrect. And we are expected to be silently tolerant since our identity and simple requests are too damn confusing anyway for anyone to want to take the time to change one little word. And when well-meaning people do misgender us and go on a self-deprecating rant about how hard they're trying, we're forced into the awkward role of essentially comforting them about their privilege.

I've had my fair share of awkward confrontations and moments regarding my pronouns. One of my closest friends, who I had been very clear with about my pronouns, misgendered me twice while we were hanging out last. I corrected her after the second time, reminding her that I go by "they/them." She simply answered with, "oh, I know!" I was puzzled. She then misgendered me a couple more times almost immediately before using the right pronouns. If she knew, then why did she do it? It would have just been better for her to acknowledge her mistake, rather than try to appear nonchalant about it. I was pissed because, although I know this person always means well, it felt as if she was intentionally using the wrong pronouns since she acted like she was so aware of it. I know she was probably just embarrassed, but I was the one who was misgendered after all. A little accountability would be nice.

I've also gotten into multiple heated debates with one of my apartment mates for her misunderstanding of my gender identity. Once I came out, she expressed to me that she was feeling alienated and even confused by my gender and pronouns, and would rudely shut down any conversations I tried to have with her about my discomfort with her behavior. We finally ended whatever was left of our friendship with a screaming fight as she told me it's not her responsibility to make me comfortable or feel understood regarding my pronouns. "I'm cis, so I couldn't possibly understand your gender thing," she had told me. Once again, cis privilege and certain individuals' refusal made me feel helpless and disillusioned with the world.

I hate this. I've been shamed when I correct people, and I've felt intense fear to correct others in certain circumstances, enduring the misgendering quietly. I wish that when an acquaintance used the wrong pronouns, I could quickly be like, "no, I'm genderqueer," or "no, I'm a 'they' not a 'she,'"as if it was no big deal. As if, "duh, this is who I am, and you slipped up." And then whoever it was that misgendered me would quickly apologize, and correct themselves, feeling embarrassed that they saw a cis woman when really the creature standing before them was a genderqueer unicorn. Instead, I endure the uncertainty and anxiety that overcomes me whenever I correct someone, ready to apologize for my pronouns and make excuses for the other person's slip up.

But I continue to correct people anyway. I fight so hard everyday to be seen and heard by the people in my life, and by my readers online. Fights to correct my pronouns in stories, or awkward long conversations about colleagues' questions about my gender have left me drained and frustrated, but the fight is always worth it. Sometimes, I've cried about how I wish I was a cis woman, that if I just never came out, being a cis woman in life and in the media industry would be so much easier. But at the same time, coming out taught me to fight and to work hard. Changing my pronouns were essential in staying true to myself, and becoming who I really am. And they taught me to be assertive, to fight like hell to be my own advocate, and above all, patience.

My pronouns are more than words. They are ideas. They reflect my gender, my being, my essence. And when you use the wrong one, when you say "she" and not "they," you're acknowledging that you don't see what I want you to see when you look at me, the non-binary androgynous person that I am. You erase me and say I'm too confusing to be able to begin to understand. And then you have the audacity to ask me to comfort you about your cis privilege.

More like this
UK Black Pride 2022 Just Broke A Major Record
By Sam Ramsden
Christina Aguilera Took A Powerful Stand At Brighton Pride
By Sam Ramsden
The Best Time To Date After A Breakup, According To Experts
By Bustle Editors
'It’s A Sin's Real-Life Jill Has An Important Message About Monkeypox
By Sam Ramsden
Get Even More From Bustle — Sign Up For The Newsletter