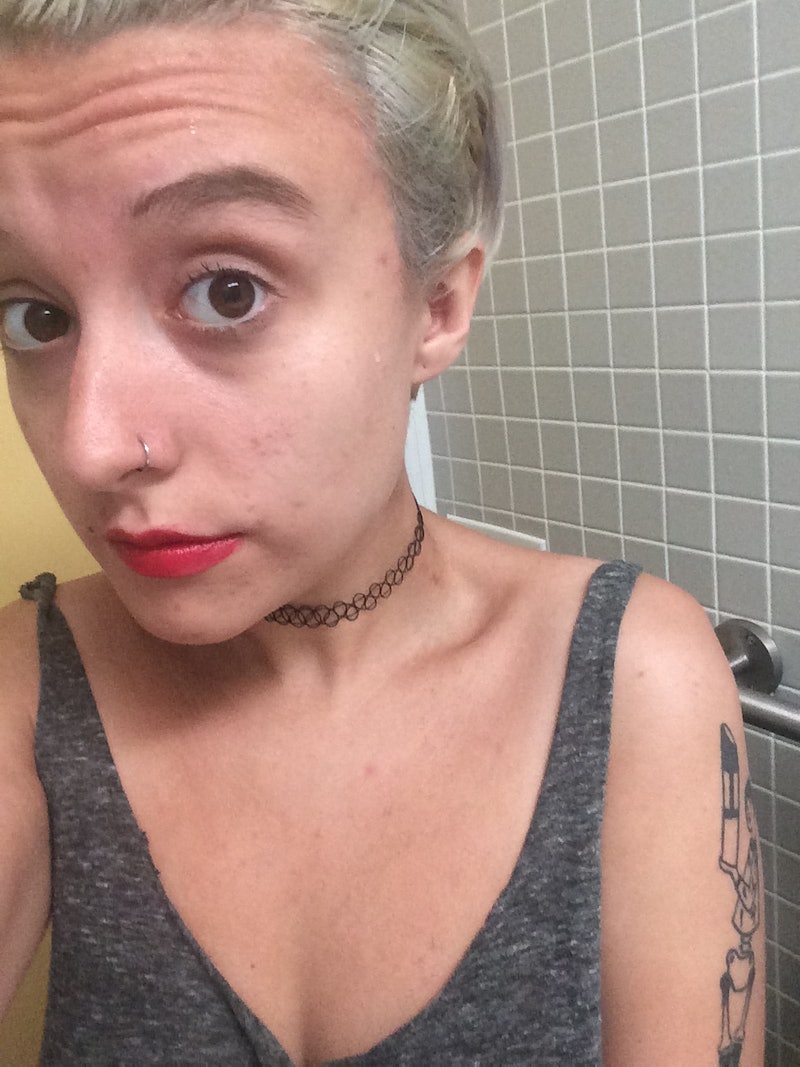 The media as of late has been doing an excellent job of shifting towards a greater visibility of trans people, with coverage of huge celebrities like Caitlyn Jenner and Laverne Cox, MTV's latest episode of True Life "I'm Genderqueer," and TLC's "I Am Jazz." As a queer person, I am very happy to see the national conversation shift towards marginalized identities who weren't previously getting any airtime. Educating people on trans identities is so important in better understanding humans around you, and gender as a whole, which can help dismantle sexist and transmisogynistic ideas of gender. But unfortunately, despite these representations (which admittedly tilt in favor of white or upper-class trans folks), people who exist between the binaries continue to be overlooked. Genderqueer, non-binary, and other gender non-conforming individuals continue to be largely misunderstood.

As someone who identifies as non-binary, this persisting widespread ignorance is important to me. My gender identity and the way I choose to present myself constantly puts me at the fringe of conversation and causes people to distance themselves from their understanding of my existence. I am consistently invalidated through misgendering, with the constant use of "girl," "woman," and "miss" when referring to me (even after I correct people). It's disorienting, frustrating, and often makes me feel invisible.

For that reason, and because every non-binary person goes through similar issues, it's important that we make an effort to educate ourselves about the identities of those around us so we can live in a world that is more kind and comfortable for everyone.

Here are some things you should know if you know someone who is gender non-conforming, or consider yourself an ally of the LGBTQIA+ community. Everyone's experiences are vastly different, and I am simply speaking from my own perspective as a gender non-conforming individual.

Gender is way more complicated than just male and female. All people exist on a gender spectrum, as they do on the sexuality spectrum, and many fall between the two extreme binaries of what we understand to be "male" and "female." Additionally, the sex you were assigned at birth, the gender you identify as, and your gender presentation are all separate things.

Personally, I don't identify as a man or a woman. I was assigned female at birth, and I present as different genders depending on the day. I alternate between "non-binary" and "genderqueer' as gender identifiers. According to this Trans, Genderqueer, and Queer Terms Glossary, genderqueer is defined as "an umbrella term for people whose gender identity is outside of, not included within, or beyond the binary of female and male." But everyone's interpretations of their genderqueerness is at least slightly different. Broadening your understanding and definition of gender is helpful in further understanding and respecting the gender I am and how I wish to perceived.

Many people's idea of "androgyny" involves a masculine-presenting person and devalues the existence of femininity. Unfortunately, this idea also runs rampant within the queer community itself. The dominant idea is that queer or genderqueer "looks" a certain way — a way that includes short hairstyles, masculine styles of dress, and oftentimes body modifications. However, as we know, presentation is separate from identity.

So if I had long hair, that doesn't make my androgyny, masculinity, or genderqueerness any less valid than a person presenting masculinity in a more classic way. Yet unfortunately, my genderqueer identity has been invalidated by cis and trans people alike because of the way I present. Others' opinions about my identity, based on the way I present, tend to be incredibly assumptive and discriminatory. Dismantling the patriarchy doesn't mean an end to femininity, so let's be kinder and more validating to the many facets of our femme and femme-presenting friends.

3. Everyone's Experience As A Genderqueer or Gender Non-Conforming Individual Is Different

I've been asked many times what exactly genderqueer means. For me, it means that I am a fluid androgynous person who isn't comfortable with their femininity about 50 percent of the time. But, as most things are, it's subjective and completely different and fluid for everyone. Some of us feel masculine and feminine at the same time. Some of us feel feminine one day and masculine the other. And then some of us don't feel masculine or feminine (also known as agender). Many of us don't feel the need to physically transition since we don't identify as either gender, and then there are those of us who do. Everyone's experience with gender is different, even in gender non-conforming communities.

4. You Should Ask For My Preferred Pronouns

One of the first things I do when getting to know someone, aside from asking their name and where they're from, is asking them for their pronouns. I make sure to do this for all humans because I want to keep in mind the problematic assumptions I mentioned above, there is no way to tell someone's pronouns or gender identity by simply looking at them. As someone who is misgendered on a daily basis, I'm sure to be careful that those around me feel that their identities are being respected and seen. It's not rude to ask for someone's pronouns — in fact it's necessary and much appreciated.

I personally use they/them pronouns. However, even though they/them pronouns are pretty widely used in gender non-conforming circles, don't assume these are the pronouns your genderqueer friend or acquaintance is using. There are many types of neutral pronouns, like zie/zir, ve/vis and tey/tem (and here are many others). People choose their pronouns based on their own preferences and comfort levels, and it's important that you learn (and don't assume) the pronouns of your friends.

There are also those gender non-conforming individuals who don't change their pronouns from she/her or he/him. Bottom line: everybody is different, and drawing broad generalizations will not be helpful.

It can seem daunting to people at first, and perhaps initially difficult to incorporate this language into their vocabulary in a grammatically correct way. But if you care about your loved ones feeling validated and are open to the flexibility of language, then learning the pronouns of the people in your life shouldn't be hard.

5. When You Misgender Me, Correct Yourself and Move On

Odds are, you're going to slip up my or any non-gender-conforming person's pronouns at least once. And that's OK. It's a learning curve and no one can get things right 100 percent of the time. If you catch yourself misgendering someone, pause and correct yourself, then move on. That is enough.

Many times, people in my life go a bit overboard and launch into long apologies about how they're sorry they misgendered me and overcompensate by telling them how much they care and feel remorse. However, this isn't a very helpful response. How these interactions often end is with me comforting them about the mistake they made, making excuses about it and acting as if I know my identity is inconvenient enough and I'm just grateful that they care. But that right there is just some damaging bullshit. I deserve to be validated the same way cisgender people are when people use the right pronoun and see them for who they are without so many questions. The last thing I want to do after being misgendered is comfort you about your privilege.

6. Be Mindful Of Your Language

As well as being mindful to use the correct pronouns with the ones you love, you should take care to be aware of the way you use other gendered words like girl, woman, guy, or man to refer to your friends. Many gender non-conforming people, including myself, are not comfortable with these gendered words or identifiers either. If I identify as genderqueer, and you took the time to know what that means, please don't call me girl or woman. Because I'm simply not a girl or a woman.

There are plenty of gender-neutral substitutes for many descriptors and titles. Replace "guy" or "girl" with "person" or "human." Swap out "Ms." or "Mr." with "Mx." Switch "boyfriend" or "girlfriend" with "partner" or "lover."

7. Be Aware Of Your Privilege

Above all, be aware of the privilege that being cisgender gives you. Be conscious of the fact that you don't deal with the disorienting experience of being misgendered on a daily basis, since the way you present or the body you were born with aligns with the gender you identify as. Keep in mind the way genderqueer people constantly have to fight to be heard, and to be acknowledged and validated by those around them (when so much of people's language and ignorance effectively erases gender non-conforming individuals). Reflect on the way shopping is relatively simple for you, with clothes made for your body and without fellow shoppers staring at you as you venture into the men's or women's department. And remember that stepping out of your house everyday doesn't pose incredible risks to your safety for the simple reasons that you are who you are and you're wearing what you want.

By understanding these privileges, you can better understand what it's like to live life as a non-binary person, and the ways in which you can help by being an effective and compassionate ally. We're not asking you to completely understand the ins and outs of our identity, or know every piece of lingo regarding gender non-conforming identities. Just validate our existence by acknowledging our right to be here and to be seen as we are.